The eclipse was exhilarating. Life-changing? Not so much. 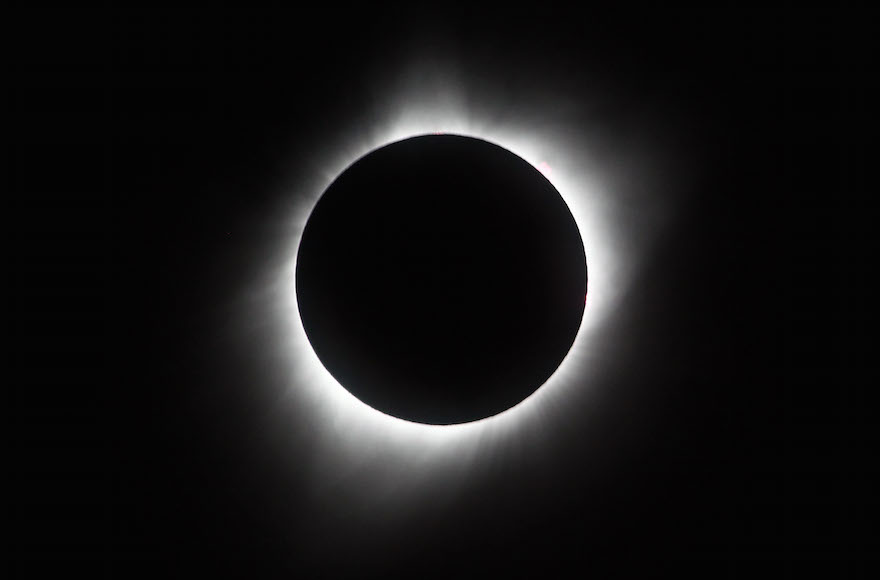 WHITE PINE, Tenn. (JTA) — The thing that truly pushed us over the top, that led us to undertake an epic 48-hour, 1,500-mile road trip at the height of the farming season, was The New York Times. The paper’s special section on the 2017 solar eclipse landed on our doorstep a week ago Saturday, and after reading the lead piece, I plopped the pages on the dining room table and told my wife: “Let’s do this.”

Dropping everything for a rare opportunity to view a near-total eclipse seemed like a great adventure, if a bit heedless. But as the date drew closer and my attention was transfixed by the travesty in Charlottesville, it began to feel like something more. The eclipse testimonials I read in the Times and saw online described the experience of two-plus minutes of daytime darkness as nothing short of transformative.

Maybe this eclipse, the first to traverse the entirety of the United States in 99 years, could effect something similar on a national scale. Maybe that was even it’s purpose — the universe, by putting on a show of astronomic awesomeness, would remind us all of our fundamental oneness at a moment when racial and political tensions are at a boil. Maybe it could even be enough to jolt us from the perilous path we seem to be following.

In fact, something sort of like the opposite happened.

A few days before our departure, a friend who had an unrelated road trip planned told me she was going to head west rather than south toward the path of totality. Her husband, a curly-haired immigrant with a funny name, had no intention of crossing the Mason-Dixon line when white supremacists were on the march.

I scoffed inwardly at this. I’m a fourth-generation American and the son of a U.S. Army veteran. I grew up in the Northeastern suburbs and about the only incident of real anti-Semitism I’ve encountered was when a fat bully called me a dirty Jew at the town skating rink when I was all of 10 years old. The idea of avoiding whole swaths of the country because some neo-Nazis had provoked a riot in Virginia appalled me.

But as it happens, I’m also married to a curly-haired immigrant with a funny name. And my wife wasn’t nearly as cavalier about the idea of watching the summer sky go black with a bunch of Southern strangers. So she started searching for fellow organic farmers in eastern Tennessee and managed to find one who would let us watch the show on his land. And so, on Sunday afternoon, after wrapping up five hours at the farmers market, we got in the car and drove 12 hours through the night to White Pine, Tennessee.

In the morning, I found myself eyeing the other guests over a motel breakfast buffet of reconstituted eggs, white flour muffins and some meat-like product served up on a small flotilla of Styrofoam — all cardinal sins to an organic farmer from Connecticut. The crowd was entirely white, and I found myself drawn to a stocky, well-built man in green camo pants and Carhartt boots. He had a broadly similar bearing to the sorts I had seen yelling about Jews in the streets of Charlottesville. And as insane as I know it to be to make inferences of that sort based on nothing more than a man’s physique and choice of trousers, this was Tennessee, where nearly twice as many voters pulled the lever for Donald Trump in November as for Hillary Clinton.

As I sipped flat coffee, and much to my own amazement, I found myself wondering which of my fellow eclipse chasers were among the majority of Republicans still standing by the president despite his equivocating remarks on the Charlottesville rally.

So it was with some measure of relief that we arrived at the farm two hours later and, stepping inside the house, noticed that week’s issue of the Sunday Times on a table. Never before had the cultural signifier of a newspaper provided me a comparable rush of comfort.

And the eclipse? For a few glorious minutes, we found ourselves transfixed by the transient beauty of nature. The brilliant flash of white light that marks the beginning and end of those two minutes or so of totality felt like an otherworldly jolt. But transformation? A renewed sense of fraternity with my fellow Americans? It was not to be.

As the final curtain of darkness fell around 2:40 in the afternoon, we heard whoops and cheers from the neighbors. (Us farmer types observed the proceedings in reverent silence.) In the distance, we heard the thundering echo of fireworks. Our host’s wife, an Asian immigrant with an engineering degree from the University of Texas, dismissively informed us that setting off colorful explosives is the ritual of choice when marking most occasions in Tennessee.

And then it was over. The white light flashed again, daylight returned, the crickets silenced, the neighbor’s lawn mower picked up right where it had left off.

And we, barely 10 hours after arriving in Tennessee, got back in the car and aimed ourselves north — exhausted, exhilarated, but, like the world around us, mostly unchanged.

(Ben Harris has reported for JTA and other publications from more than 15 countries. He runs an organic farm in Connecticut.)