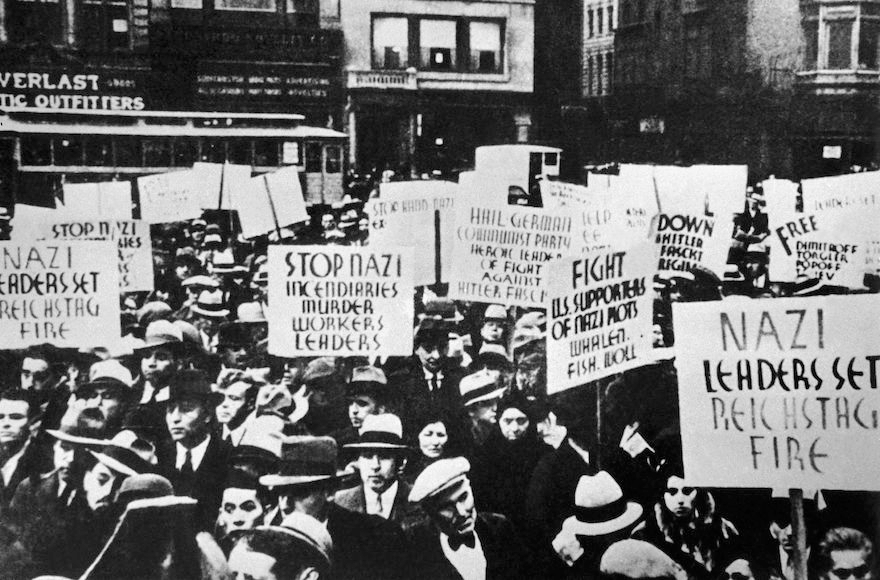 An anti-Nazi protest in front of the German legation in New York in 1933. (Keystone-France/Gamma-Keystone via Getty Images)
Advertisement

(JTA) — The Nazi punching debate (is it OK to punch a Nazi?) went viral in January after a liberal protester slugged white supremacist Richard Spencer in the face during President Donald Trump’s inauguration. It was reignited this month following brawls between far-right nationalists gathered in Charlottesville, Virginia, and counterprotesters, including some associated with the combative antifa movement.

Although most eyewitness accounts of the events in Charlottesville pin much of the blame for the violence on the far-right marchers, and a counterprotester was killed by a car driven by a suspected white supremacist, critics like attorney Alan Dershowitz disapproved of the “anti-fascists” who showed up at the rallies.

“They use violence, and just because they’re opposed to fascism and to some of these [Confederate] monuments shouldn’t make them heroes of the liberals,” he said on “Fox & Friends.”

But whether it’s OK to confront hatred with violence is not a new topic of conversation. The question was debated in the 1930s among American Jews, who were faced with both the rise of Adolf Hitler in Germany and Nazi sympathizers at home.

Following Hitler’s rise to power in 1933, Jews in Newark saw Nazi-sympathizers marching down their city’s streets.

“The threats they faced were physical because the Nazis were marching in uniform. Many of them were armed. They broke windows, and they attacked merchants, but never with fatal consequences,” Grover said of residents of the city’s Third Ward neighborhood, where many Jews and Nazi supporters lived side by side.

Nazis also screened movies with anti-Semitic messages and hung anti-Jewish posters in the city, Grover told JTA. At a local election in bordering Irvington, they plastered posters across the city urging residents not to vote for Jewish candidates.

In response, Jews started organizing to defend themselves. Across the country, Jews would fight Nazis on an ad hoc basis. But in Newark, a more organized group emerged: the Minutemen. Jewish mobster Meyer Lansky had started the group in New York, but the Minutemen were shut down there by the authorities after some Jews reported them, fearing the use of violence would lead to an increase in anti-Semitism.

In Newark, however, the Minutemen took hold, aided by another Jewish gangster, Abner “Longy” Zwillman, and led by former professional boxer Nat Arno. On Oct. 18, 1933, JTA reported on a typical clash, outside a Nazi meeting at a German auditorium: “The meeting, at the Schwabenhalle, under the auspices of the Friends of the New Germany … was the target for stones and stench bombs thrown by the anti-Nazis in the crowd of about one thousand who waited outside the hall.”

The following May, JTA reported on a melee in Irvington: A “Nazi meeting terminated in fisticuffs, a miniature riot, arrests and injury to many persons.”

Though the Minutemen were “cheered and accepted by the majority of the Newark Jewish population,” Grover said, not everyone was enthusiastic.

Some Jews, especially those affiliated with Reform synagogues, “felt it gave Jews a bad name to be engaged in brawling, and they felt the government would take care of it,” he said. Those who opposed the group tended not to live in the Third Ward.

Yet the mostly Jewish group, which also had a few Irish and Italian members, became a powerful tool to fight Hitler sympathizers.

“The Minutemen were ready for them. The Minutemen had clubs and stink bombs, and they attacked the participants of the event,” Grover said of one Nazi mass demonstration in 1933. “Police came, and there were some arrests, and people said later that the Jews, the Minutemen, had no right to attack a peaceful gathering in a Newark hall.”

“Physical prowess as exhibited against the Newark Nazis, Irvington Nazis, was a matter of pride for the Eastern European Jews who came because of the pogroms in Russia in the 1880s,” Grover said. “They took pride in it because they saw the newsreels coming from Germany [showing] how the Jews in Germany were being treated and all the different anti-Jewish legislation.”

“Just the thought of having Minutemen present at any of their meetings discouraged a lot of the Nazis from holding public meetings,” he said. “They were successful because a lot less propaganda was brought out by the Nazis because of fear of the Minutemen.”