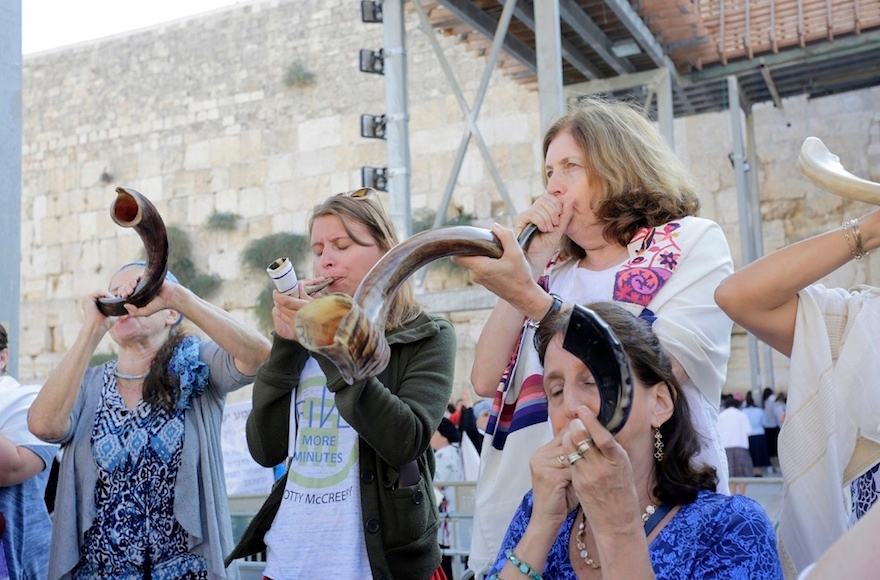 Women blowing shofars at the Western Wall in Jerusalem, Aug. 23, 2017. (Women of the Wall)
Advertisement

JERUSALEM (JTA) — Four female students from the Hebrew Union College-Jewish Institute of Religion, including two Americans, were asked to lift their shirts and skirts for security before being allowed to enter the Western Wall plaza.

The women were among a group of 15 rabbinical, cantorial and Jewish education students from North America and Australia who joined about 200 men and women in an egalitarian service held Wednesday morning on the plaza behind the men’s and women’s sections.

The four said they were questioned, pulled aside into a private room and asked to lift their shirts and skirts. The Western Wall security did not say what they were looking for, according to the Israel Religious Action Center of the Reform movement, or IRAC. Western Wall officials in the past have detained women and searched for Torah scrolls and other religious items they consider inappropriate for women to bring to the wall.

In January, Israel’s High Court of Justice ruled  that women are not to be subjected to intense body searches when entering the Western Wall.

Thousands enter the plaza daily after walking through metal detectors.

“There is no reason to do this to these four young women,” Steven Beck of the IRAC told JTA. “It is purely an intimidation tactic.”

The egalitarian service took place following the monthly rosh chodesh service of the Women of the Wall group. About 100 women participated in the service for the first day of the month of Elul. The women were able to bring a Torah scroll into the women’s section and read from it during the service, according to the group. Some 15 women sounded shofars at the end, as is traditionally done in the month leading up to Rosh Hashanah.

“The shofar blowing by Women of the Wall was not a call for repentance and awakening but a call for war among the Jews,” Rabbi Shmuel Rabinowitz, rabbi of the Western Wall, told Haaretz.

Protesters disrupted the service about a half hour after it started; the group described them in a statement as “ultra-Orthodox women and girls” who “arrived shouting, whistling, spitting and cursing incessantly.” Security guards at the site did not act to prevent the disruptions despite requests to do so, according to the Women of the Wall.

The IRAC said it will submit formal complaints about the body searches on the students.

“This is a new low for the Rabbi of the Kotel trying to intimidate, humiliate, and exclude liberal women trying to pray at the Western Wall,” Rabbi Noa Sattath, director of the Israel Religious Action Center, said in a statement.

He added: “The Government knows that the only way forward is to implement the Kotel compromise that we all agreed to.”

The compromise refers to a government agreement to expand and upgrade the egalitarian prayer section at the southern end of the Western Wall. The agreement puts the upgraded section on equal footing with the single-sex sections; it would be run by a special committee with no input from the Chief Rabbinate.

In June, the Cabinet suspended the deal passed in 2016 as a result of negotiations between the Reform and Conservative movements, the Women of the Wall, the Jewish Agency for Israel and the Israeli government. The suspension came after the government’s haredi Orthodox coalition partners pressured Prime Minister Benjamin Netanyahu to scrap the agreement. The government has said it plans to go forward with the expansion of the egalitarian section despite the freeze.