Trump at Phoenix rally insists he blasted racists, leaves out ‘many sides’ controversy 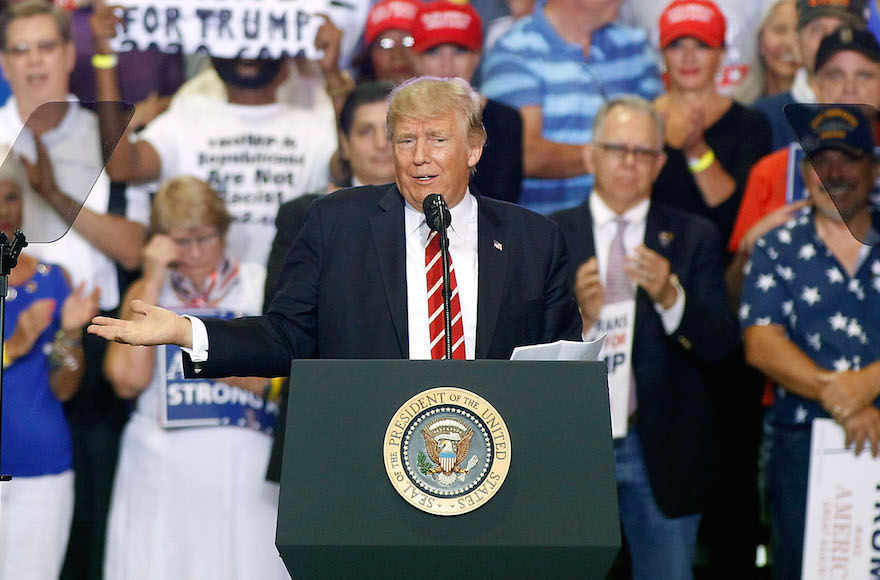 WASHINGTON (JTA) — President Donald Trump said the media misrepresented his condemnation of white supremacists last week, but he did not address the controversial elements of his remarks blaming all sides for violence at a far-right rally in Charlottesville.

Trump, who unprecedentedly launched his campaign for re-election in 2020 almost as soon as he was elected, appeared Tuesday at a campaign rally in Phoenix.

“What happened in Charlottesville strikes at the core of America,” the president said.

Trump quickly transitioned, however, into an attack on the media — he pointed to the media pen and called reporters “dishonest” and “bad” people — and he pulled from his pocket transcripts of his remarks at various stages following the deadly attack.

In fact, Trump did not name those groups, including the Ku Klux Klan, until he read a prepared statement two days after the violence. What the president did not mention in Phoenix was that in his initial remarks within hours of the attack on Aug. 12, he blamed “many sides” for the violence. And at an Aug. 15 news conference, he again blamed the protesters and counterprotesters for the violence and said there were “very fine people” on both sides.

Democrats and Republicans, along with an array of Jewish groups, have criticized Trump for placing the white supremacists and neo-Nazis and the counterprotesters on the same plane.

Trump’s Phoenix appearance was meant to tout his proposals for tax reform, but he did not mention the issue until near the end of a speech that lasted well over an hour.

Instead, he used the bulk of his speech to settle scores with his perceived enemies, including the press, Democrats and the two Republican senators from Arizona, John McCain and Jeff Flake.

Trump said the media was to blame for the violence in Charlottesville by giving the white supremacists a platform. He also questioned the patriotism of reporters.