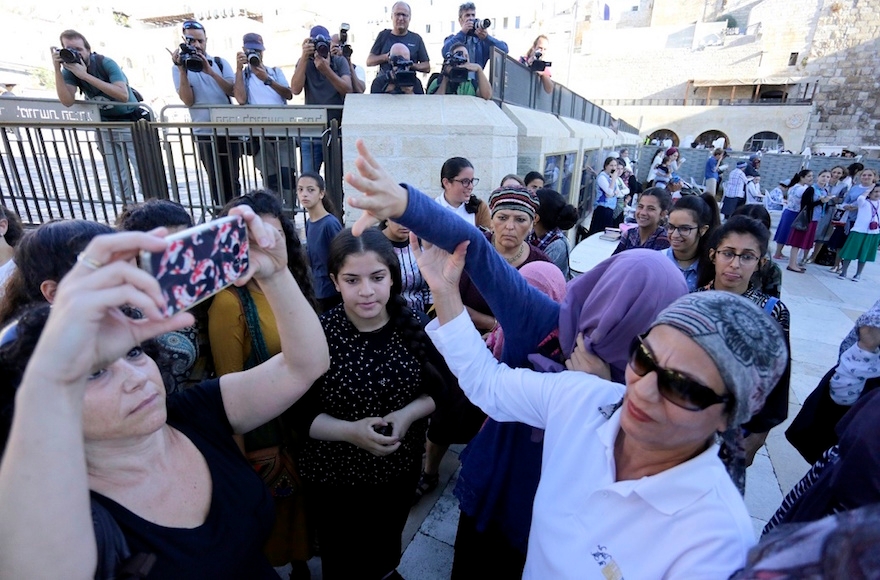 Female worshippers visiting the Western Wall in Jerusalem, Aug. 23, 2017. (Women of the Wall)

(JTA) — Leaders of the Reform movement in the United States called on Israeli Prime Minister Benjamin Netanyahu to “issue a swift and clear denunciation” of the demeaning body searches of four female rabbinic students at the Western Wall.

The students from the Hebrew Union College-Jewish Institute of Religion, including two Americans, on Wednesday were asked to lift their shirts and skirts for security before being allowed to enter the Western Wall plaza, where an egalitarian prayer service was being held. The four said they were questioned and pulled aside into a private room.

“These bold young leaders were treated in the most degrading way imaginable,” said the Reform letter to Netanyahu dated Aug. 24. “They were pulled out of line among hundreds of men and women and were subject to a completely unnecessary search. The actions of the Western Wall Heritage Fund go beyond the disagreement we have about the implementation of a compromise at the Kotel. This was an unacceptable and shameful attempt to hurt and humiliate our leaders, and we are deeply outraged.”

The letter was signed by Rabbi Rick Jacobs, president of the Union for Reform Judaism; Rabbi Aaron Panken, president of the Hebrew Union College-Jewish Institute of Religion; and Rabbi Steven Fox, chief executive of the Central Conference of American Rabbis.

Western Wall security did not say what they were looking for, according to the Israel Religious Action Center of the Reform movement, or IRAC. Western Wall officials in the past have detained women and searched for Torah scrolls and other religious items they consider inappropriate for women to bring to the wall.

In January, Israel’s High Court of Justice ruled that women are not to be subjected to intense body searches when entering the Western Wall.

“Our goal with our young leadership is to cultivate a love and a commitment to Israel,” the letter also said. “We will continue to struggle for justice and work to create an Israel we can be proud of. The actions of the personnel at the Kotel yesterday morning only continue to make our work extremely difficult.

“Please issue a swift and clear denunciation of the events that took place yesterday,” it concluded.