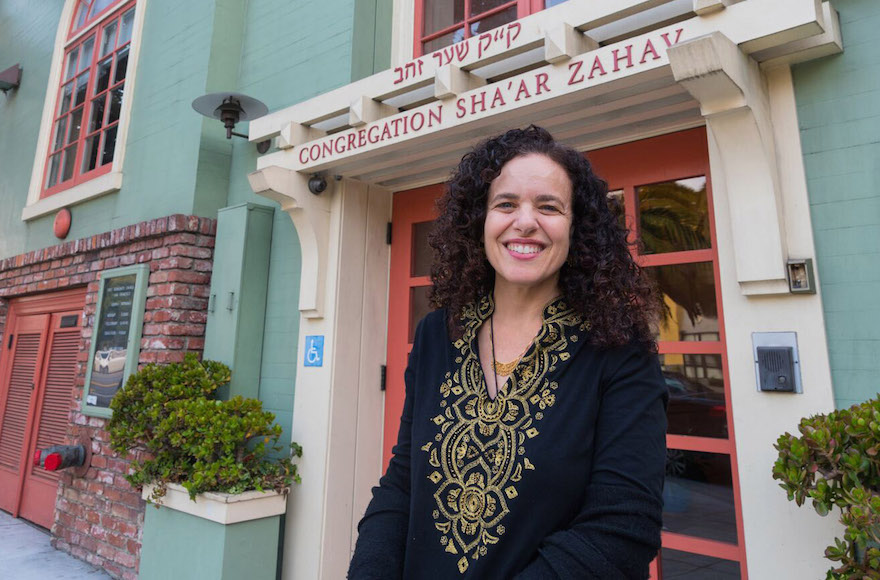 SAN FRANCISCO (J. The Jewish News of Northern California via JTA) — At Congregation Sha’ar Zahav in San Francisco, Rabbi Mychal Copeland leads Shabbat services with a rainbow tallit around her shoulders. The synagogue newsletter is called “The Jewish Gaily Forward.”

But the shul, which since its 1977 founding has been known as San Francisco’s gay synagogue, is now reaching out to a broader community and de-emphasizing its identity as an LGBT-specific congregation.

A similar transformation is occurring at other LGBT synagogues. Notably, Congregation Beit Simchat Torah in New York City now identifies itself as an LGBTQS shul — the S standing for straight — that serves Jews of all genders and sexual identifications, according to Rabbi Sharon Kleinbaum. The synagogue was founded in 1973 as a “home and haven for LGBTQ Jews,” according to its website.

At the same time, there has been an evolution in attitudes toward LGBT people in the greater Jewish community. Many synagogues today have become increasingly welcome to homosexual, bisexual and transgender congregants and clergy.

“This year we’re marking 40 years, and that’s a significant number in Judaism,” said Michael Chertok, the president of Sha’ar Zahav and a member since 1993. “It’s hard to say we’ve come into the Promised Land, but we’re really in a new place as far as LGBT rights in this country.”

Arthur Slepian, who joined Sha’ar Zahav in 1989 and has served as its president, said he is proud of the Reform synagogue’s leading role in the move to greater inclusiveness in the Jewish community and happy it can now broaden its appeal.

“I think that there are always going to be people that feel a bit marginalized or not completely at home at other places, and I think Sha’ar Zahav is striving to always be the home for that part of the community,” said Slepian, founder of A Wider Bridge, a San Francisco-based nonprofit that supports Israel’s LGBT community. “And I think it’s a great thing for the Jewish world that people who are not LGBT will walk through the doors of Sha’ar Zahav and celebrate its history.”

Still, the congregation intends to keep its “queer values” core. The changes, which include three new board members who don’t identify as LGBT, do not mean Sha’ar Zahav is ready to toss out its rainbow flags or stop participating in Pride Week events. Occasions such as the annual Transgender Day of Remembrance will continue to be a congregational focus.

The stained glass on one side of Sha’ar Zahav’s ark has the Hebrew inscription “Hinei mah tov umanayim, shevet achim gam yachad” (How good and pleasant it is to sit together as brothers). On the other side, the inscription is the same — except the word “achot” (sisters) replaces “achim” (brothers).

“So much has changed in 40 years, especially in the Bay Area, with regards to inclusion of LGBT people,” said Copeland, whose tenure as Sha’ar Zehav spiritual leader began July 1. “At the same time, I see this as not necessarily a break in any way in what this community has been doing for so many years.

“I want to be sitting with and praying with and learning with anyone who wishes to be in a Jewish space, exploring life together.”

Founded four decades ago as a home for gay and lesbian Jews, the synagogue was a leader in the 1980s in caring for those with AIDS. In recent years, it has openly welcomed people who are transgender.

Leaders of the 250-family congregation decided in 2012 to begin a strategic planning process to guide it forward in a Bay Area that had become younger, less religious and more diverse. In 2015, the Walter and Elise Haas Fund awarded Sha’ar Zahav a grant to further explore its evolving identity and the synagogue hired interim Rabbi Ted Riter, who specializes in transforming synagogues, to lead it through the process.

“When we look back at our history, we recognize that our synagogue has committed to a multigenerational exploration of what it means to be queer,” reads a case study of the changes. “The Sha’ar Zahav that is emerging is nourished by our LGBT-specific roots, while also recognizing that what unifies us runs so much deeper than sexual orientation and gender identity.” 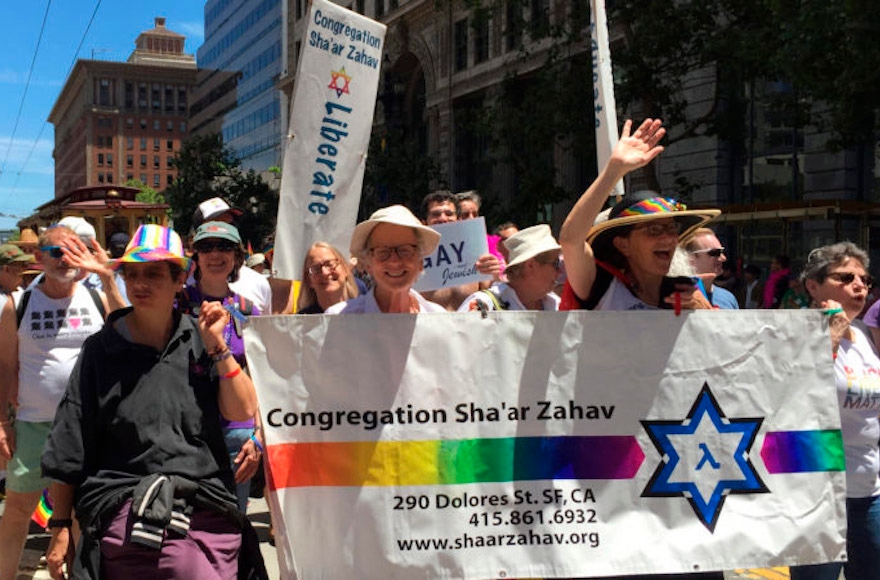 Both Chertok and Copeland say “queer values” emphasize a refusal to conform and a questioning of authority, even while honoring tradition. Those values include support for refugees and reaching out to interfaith families.

“Queer values overlap with some deep-seated Jewish values such as otherness, always looking out for who’s not being treated well, who’s being oppressed,” Copeland said. “Those values were imbedded in the founding of Sha’ar Zahav as a place where gay and lesbian Jews could come and pray at a time when that was very difficult.”

Still Kleinbaum, who has served at New York’s Beit Simchat Torah since 1992, noted that focusing on self-identification misses the point: Sha’ar Zahav doesn’t have to worry about gay Jews flocking to other San Francisco shuls. She said the larger problem is that most LGBT Jews avoid synagogue altogether.

“Our ‘competition’ is not other synagogues that are opening to LGBT folks,” Kleinbaum said. “Our real ‘competition’ is the fact that most LGBT folks don’t care about synagogues. So the issue is how we’re going to make ourselves relevant for the 90 to 95 percent of LGBT Jews who don’t go to a synagogue.”

Nonetheless, that doesn’t diminish the role the synagogue played in helping lead an evolution within the Jewish community.

“Sha’ar Zahav was born out of a sense of necessity that there wasn’t any other place LGBT people could go and feel included,” Slepian said. “But out of that necessity, something holy was created. Sha’ar Zahav and many other gay shuls really elevated the Jewish world by setting an example of what it meant to be inclusive.

“I think [de-emphasizing its identity as an LGBT-specific congregation] is just what’s needed today, and I think it is a sign of progress that there are many places that LGBT people can go in the Jewish world and feel welcomed and celebrated. I don’t know many LGBT people in their 20s and 30s who feel compelled to be part of an all-LGBT community. We live in a very different world.”