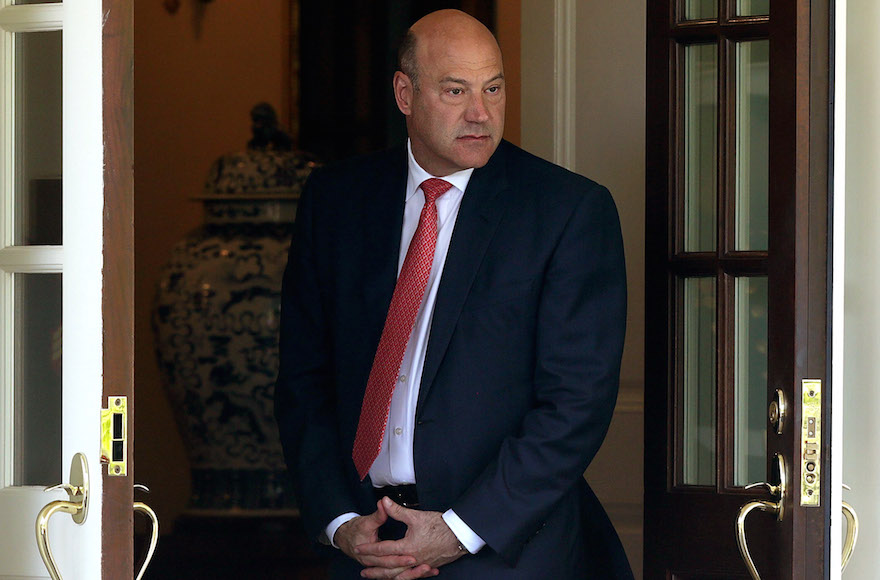 Gary Cohn at the entrance of the West Wing of the White House June 9, 2017. (Alex Wong/Getty Images)
Advertisement

Cohn, the top economic adviser for Trump, drafted a letter of resignation, according to the report Friday, which cited two unnamed people familiar with the draft.

In an interview Thursday with the Financial Times, Cohn said the White House “can and must do better” in consistently condemning hate groups. His remarks came nearly two weeks after the Charlottesville rally, which turned deadly when an alleged white supremacist rammed a crowd of counterprotesters with a car, killing one and injuring at least 19.

It was his first public reference to the national dialogue about the violence. As a “patriotic American,” Cohn said he did not want to leave his job as director of the National Economic Council.

“But I also feel compelled to voice my distress over the events of the last two weeks,” he said.

After the Charlottesville rally, Trump said that both far-right marchers who gathered in the southern Virginia city and counterprotesters shared the blame for the violence that ensued. Trump later condemned the Ku Klux Klan, racists and neo-Nazis amid criticism that he failed to single out the far-rightists immediately afterward, but a day later said there were “very fine people on both sides.” Cohn was standing with three other officials behind Trump in the lobby of Trump Tower in New York City on Aug. 15 when the president made his latter remarks to reporters.

“Citizens standing up for equality and freedom can never be equated with white supremacists, neo-Nazis and the KKK,” Cohn said in the Financial Times interview. “I believe this administration can and must do better in consistently and unequivocally condemning these groups, and do everything we can to heal the deep divisions that exist in our communities.”

Cohn added: “As a Jewish American, I will not allow neo-Nazis ranting ‘Jews will not replace us’ to cause this Jew to leave his job.”

He also told the Financial Times he spoke privately with Trump about these issues.

“I have not been bashful saying what I think,” Cohn said.

In the days after Charlottesville, Cohn’s family — including his wife — told him he needed to think seriously about departing, The New York Times reported, citing two people briefed on the discussions. Several of his friends in the business community also urged him to step away from the administration. Cohn is a former executive at Goldman Sachs.

Amid fears that Cohn would resign, the U.S. stock market dropped until the White House denied the rumor. Cohn, who had spent his entire career in the trading world before joining Trump late last year, was deeply troubled by the market reaction, people close to him told The New York Times.

Cohn’s critical statements of the president’s performance come as Trump prepares next week to start a major national effort to sell a tax-cut plan, which Cohn has been toiling for months behind the scenes to craft, The New York Times noted.

His remarks were in marked contrast to a statement by the Treasury secretary, Steven Mnuchin, who also is Jewish and stood directly behind the president during the Aug. 15 news conference.

“I don’t believe the allegations against the president are accurate, and I believe that having highly talented men and women in the country surrounding the president in his administration should be reassuring to you and the American people,” he told former Yale classmates who had urged him to resign.