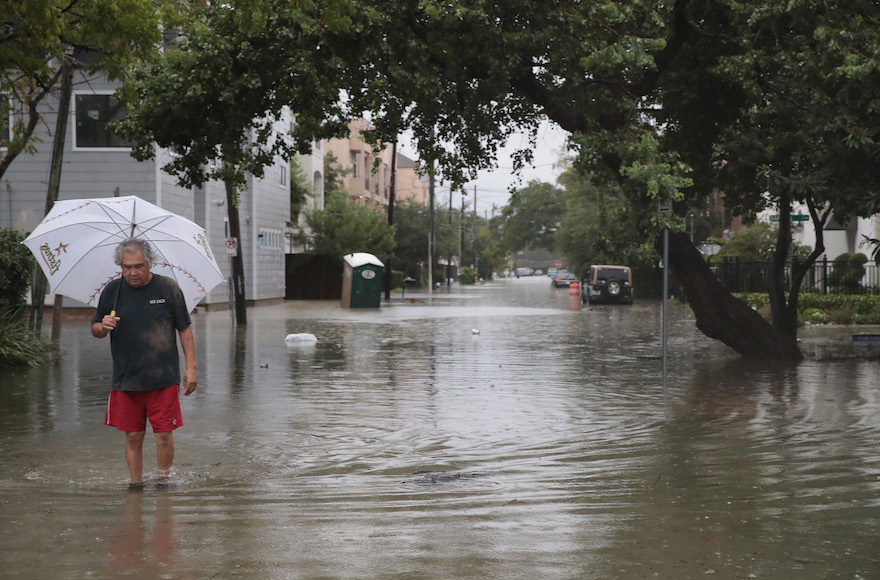 (JTA) — At least five people are reported dead in Houston as rain and winds from Hurricane Harvey hit the city, causing massive flooding.

“Parts of our community have been impacted by the severe weather of the past two days. We are working with our partner agencies to assess the current situation in our community and determine priority on action items. We will communicate out as soon as we know how best to move forward in the short and long-term,” the Jewish Federation of Houston posted Sunday morning on Facebook.

The post did not specify what in the Jewish community had been damaged.

Prior to the onset of the hurricane, the Federation wrote on its website that it was “preparing to mobilize a community response to Hurricane Harvey in the event it is necessary… We are here to help manage the recovery, as needed.”  The Federation said it had met with Jewish Family Service, the Evelyn Rubenstein Jewish Community Center and Seven Acres – to spearhead a community-wide recovery response.

The Houston JCC announced on Facebook that it would close Friday and remain closed Sunday, with an update Sunday evening. Prior to the hurricane it collected emergency supplies for the community including bottled water, work gloves, packing supplies, plastic storage bins, heavy trash bags, heavy-duty razor blades to rip out wet and damaged carpet, cleaning supplies and gift cards for home repair stores and grocery stores, according to the Texas Jewish Herald-Voice.

The newspaper reported that homes in heavily Jewish populated Houston subdivisions were reporting flooding Sunday morning, for the third time in as many years.

The hurricane first made landfall on Friday evening near Corpus Christi, Texas, about 200 miles southwest of Houston.

The Jewish Community Center of Corpus Christi was closed Friday and Sunday, and said in a Facebook post it hoped to resume normal operations on Monday.

Congregation Beth Israel in Corpus Christi closed from Friday, cancelling all Shabbat services and Torah studies, it said in a Facebook post.

The Jewish Federations of North America opened an emergency relief fund to support communities and individuals in Houston, San Antonio, Galveston, Corpus Christi and other areas that have been hammered by Hurricane Harvey.

Several Jewish communal institutions that flooded two years ago have flooded again, but communities in the affected areas won’t be able to start assessing the scope of damage to institutions and members of their communities until the rain stops and roads become passable, according to JFNA.

Harvey, now a tropical storm, is expected to continue drop torrential rains and catastrophic flooding on the region for the coming days, according to the National Hurricane Center. Some 15 inches to 30 inches of rain are expected in the Houston area, South Texas and parts of Louisiana. Thousands remain without power.

“This rain will lead to a prolonged, dangerous, and potentially catastrophic flooding event well into next week,” the National Weather Service said.