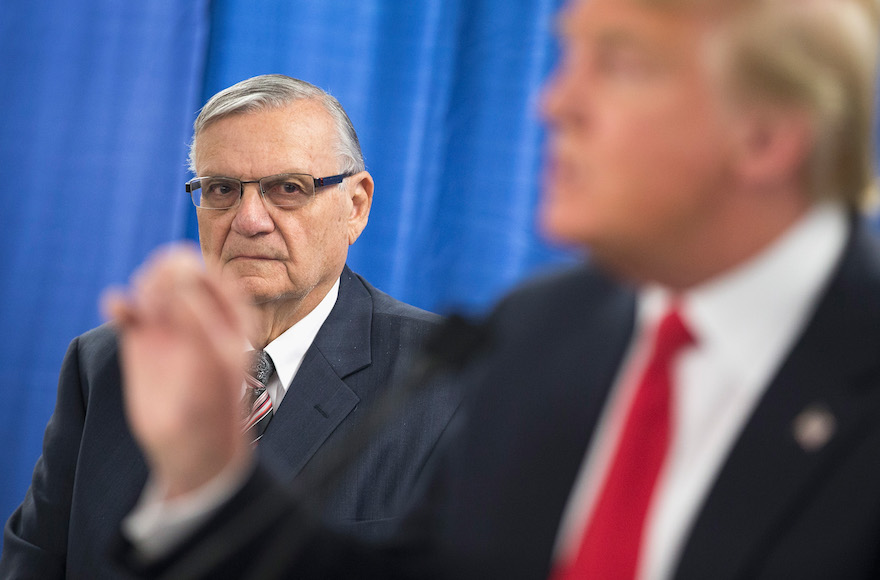 Joe Arpaio listening as Donald Trump, then a candidate for the Republican presidential nomination, speaks to the press prior to a rally in Marshalltown, Iowa, Jan. 26, 2016. (Scott Olson/Getty Images)
Advertisement

Arpaio, 85, was sheriff of Maricopa County in Arizona for 24 years, losing a reelection bid in November 2016. He was found guilty in a Justice Department investigation for racially profiling Latinos and convicted on July 31 of criminal contempt for disobeying a federal judge’s order on detaining individuals suspected of being in the U.S. illegally.

At the time of the pardon he had not yet been sentenced, but had faced up to six months in jail.

“President Trump’s pardon of Sheriff Arpaio is shameful,” said American Jewish Committee CEO David Harris in a statement. “It undermines our judicial system and, ignoring the rule of law, endorses the egregious maltreatment and racial profiling of individuals in our country. Public humiliation of detainees was an Arpaio specialty.”

Arpaio proudly compared his open-air tent city jails for suspected illegal immigrants to concentration camps, according to the Anti-Defamation League.

“President Trump’s pardon of Joe Arpaio defies explanation and flies in the face of American values. We stand today with the Latino community, who have been the primary targets of Arpaio’s bigotry and feel the president’s decision to pardon him particularly acutely,” Jonathan Greenblatt, ADL CEO, said in a statement.

“This pardon leads us to question where President Trump stands on the rule of law. Arpaio willfully defied a court order for racially profiling Latinos and now is getting away with it – a very dangerous precedent. The pardon will foster divisions in our country at a time when we need healing. No doubt anti-immigrant extremists will celebrate this decision, but it is a sad day for Americans who care about justice, equality and strengthening our social fabric,” he said.

Noah Feldman, a professor of constitutional and international law at Harvard University, wrote last week that while Trump has the power to issue the Arpaio pardon, the action nonetheless sets a dangerous precedent.

“In the end, the only legally binding check on law enforcement is the authority of the judiciary to say what the law is — and be listened to by the cops on the streets,” Feldman wrote in Bloomberg View. “If the president blocks the courts from making the sheriff follow the law, then the president is breaking the basic structure of the legal order.”

The White House statement announcing the pardon said: “Throughout his time as Sheriff, Arpaio continued his life’s work of protecting the public from the scourges of crime and illegal immigration.”

Trump also tweeted an announcement of the pardon: “I am pleased to inform you that I have just granted a full Pardon to 85 year old American patriot Sheriff Joe Arpaio. He kept Arizona safe!”

I am pleased to inform you that I have just granted a full Pardon to 85 year old American patriot Sheriff Joe Arpaio. He kept Arizona safe!