Israelis again debate the price of a kidnapped soldier’s body 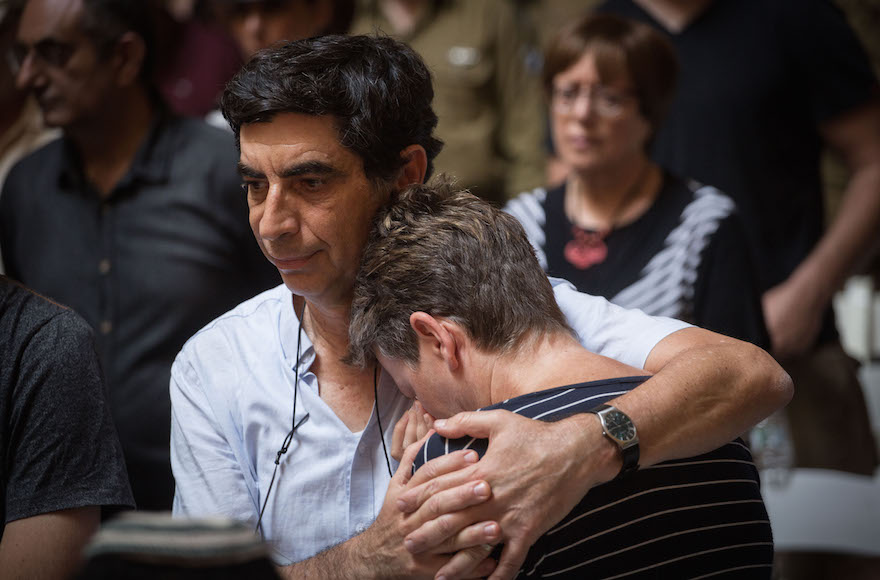 JERUSALEM (JTA) – Israel’s defense minister reignited the emotional national debate over what price the country should be willing to pay for the return of kidnapped soldiers, particularly the bodies of those who have been killed.

Avigdor Liberman said Sunday that Israel must not repeat the “mistake” of the 2011 Gilad Shalit deal, in which it released more than 1,000 Palestinian security prisoners in exchange for the return of its soldier from Hamas.

The argument, which never really ends here, was on.

Some Israelis responded that the government should simply be forcing concessions from the terrorist group, which governs the Gaza Strip. Others said Liberman’s suggestion that limitations be placed on prisoner exchanges amounted to abandoning captured soldiers.

The defense minister’s comments came in a statement responding to two recent developments. Earlier Sunday, Simha Goldin, the father of missing soldier Hadar Goldin, held a news conference in which he called Liberman “weak” and “cowardly” for failing to bring home the remains of soldiers, including his son, whose body was never returned by Hamas after Israel’s 2014 Gaza war.

Last week, Lior Lotan resigned from his position overseeing Israel’s efforts to retrieve from Hamas the remains of Goldin and another soldier, Oron Shaul, as well as three citizens still believed to be alive.

Liberman said he understands and accepts Goldin’s criticism and that the return of the soldiers’ remains is still a top priority.

“I consider this to be of the utmost moral and ethical import, first and foremost to the families and to the IDF and the State of Israel,” he said.

However, he argued that Israel could not afford another Shalit deal, which he said saw the release of 1,027 “murderers and their agents,” including Mahmoud Kawasme and Yahya Sinwar. Kawasme helped fund the 2014 kidnapping and killing of three Israeli teenagers. Sinwar was recently elected to head Hamas in Gaza.

Liberman said 202 of the released prisoners have since been rearrested for alleged involvement in terror, resulting in the deaths of seven Israelis. He said 111 of those rearrested are still in prison.

Hamas has been holding the remains of Goldin and Shaul since the two were killed in the Gaza Strip during Israel’s Operation Protective Edge. The three living Israelis being held are said to have freely entered Gaza.

Israel reportedly has been conducting indirect talks with Hamas about a possible prisoner exchange. As opposed to the Shalit family, which demanded the government comply with Hamas demands, the Goldin and Shaul families have urged Israel to punish Hamas in the belief it could help win the release of the remains. They have urged Israel to stop returning the bodies of Hamas attackers, downgrade the conditions of Hamas prisoners held in Israel and intensify the siege on Gaza.

But many Israelis, including political and military leaders, have argued that such tactics would likely bring Israel another war with Hamas and increased international opprobrium. They are among those who criticize Liberman for taking too hardline a position on captured soldiers and say mass prisoner swaps, like the Shalit deal, are the only realistic way to rescue captured soldiers.

On Monday, Housing Minister Yoav Galant rapped Liberman for supporting the Shamgar Commission, which in 2012 recommended severely limiting the concessions that Israel can make to free a captured soldier. Among other things, the report opposed releasing security prisoners in exchange for the bodies of Israeli soldiers.

“The adoption of the Shamgar report would sentence a captured soldier to death,” Galant told Israel Radio.

Prime Minister Benjamin Netanyahu formed the commission but never brought its findings to a government vote that would make them binding. He has yet to weigh in on the recent debate.

Attorney Liron Libman, a former director of the Israeli army’s international law department, came out Tuesday with specific recommendations for the kind of restrictions Israel could place on prisoner releases. Now a researcher at the Israel Democracy Institute think tank, he said the government should consider freeing only prisoners who have not violated the law of war, for instance by killing civilians as opposed to soldiers.

“Firstly, it will help to create a combat environment of combatants fighting one another,” Libman said in a statement. “Secondly, it is meant to lower the motivation of terrorists to carry out terrorist attacks against civilians. And lastly, it will bring us international legitimacy and also bring international pressure on terrorist organizations to engage in negotiations, and will aid Israel‘s international image.”

Most Israelis do not make such distinctions. However, they do draw lines between living soldiers, dead soldiers and civilians. An October 2016 public opinion by the Israel Democracy Institute and Tel Aviv University found that 57.5 percent of Israelis support releasing Palestinian prisoners in exchange for living Israeli soldiers. But 68 percent percent oppose doing so for soldiers’ remains. The number is 56 percent for civilians.

On Monday, veteran journalist Yoav Limor gave voice to a mainstream view in a column for the Israel Hayom newspaper.

“The unwritten golden rule in Israel says that you don’t argue with bereaved parents since they paid the ultimate price, but that doesn’t mean you have to agree with them or do everything they demand,” he said. “[O]n the other hand, the idea that Israel will ‘do everything’ needs to be valid, certainly worth something, for those sent to fight, and no less so for those who will sent to fight in the future.”