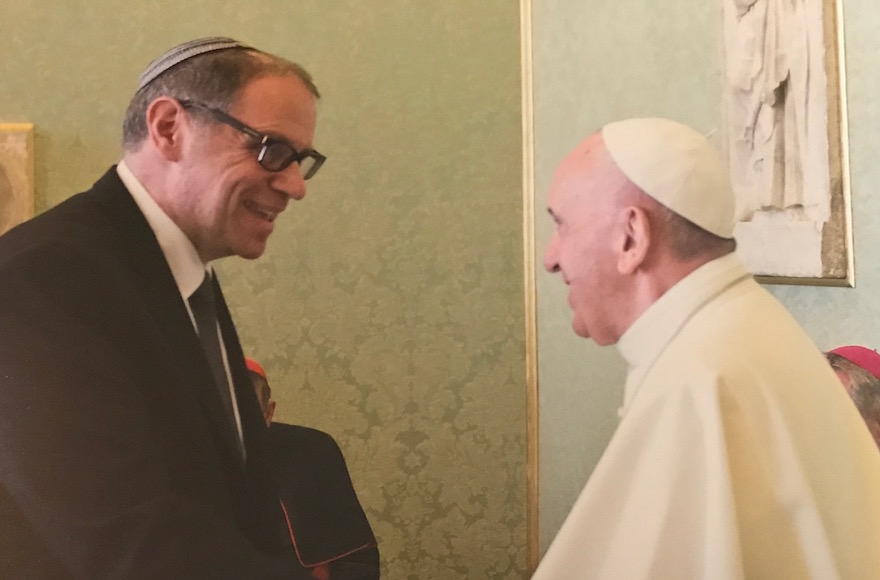 ROME (JTA) – Meeting at the Vatican, an international delegation of rabbis sought the pope’s cooperation in combating Islamic extremism.

At the audience Thursday with Pope Francis, the rabbis presented a document calling for the two faiths to work together on Islamic extremism and other issues. The document was drafted last year by the Conference of European Rabbis along with the Chief Rabbinate of Israel and the Rabbinical Council of America in the wake of the 50th anniversary of the Vatican’s Nostra Aetate declaration of 1965, which opened formal dialogue between the Vatican and the Jewish world.

The delegation was led by Rabbi Pinchas Goldschmidt, president of the Conference of European Rabbis, and included members of all three groups.

While noting the deep theological differences that remain between Christianity and Judaism, both the rabbis and the pope expressed a commitment to deepening dialogue and partnership.

Thanks to Nostra Aetate, Francis told the delegation, “we have been able to draw closer to one another and to engage in an effective and fruitful dialogue. We have grown in mutual understanding and deepened our bonds of friendship.”

The rabbis’ document stated: “Despite the irreconcilable theological differences, we Jews view Catholics as our partners, close allies, friends and brothers in our mutual quest for a better world blessed with peace, social justice and security.”

The rabbis’ statement called on the Church to join forces to combat “the radical offshoots of Islam” and on other Christian denominations to emulate the Catholic Church in bettering relations with Jews. It called radical Islam “our generation’s new barbarism,” saying it endangers “our global society” and threatens “world peace in general and the Christian and Jewish communities in particular.”

The document called on other Christian faiths to follow the lead of the Catholic Church in bettering relations with Jews.

“Certain kinds of doctrines cause real suffering; those Christian doctrines, rituals and teachings that express negative attitudes toward Jews and Judaism do inspire and nurture anti-Semitism,” it said, adding: “Therefore, to extend the amicable relations and common causes cultivated between Catholics and Jews as a result of Nostra Aetate, we call upon all Christian denominations that have not yet done so to follow the example of the Catholic Church and excise anti-Semitism from their liturgy and doctrines, to end the active mission to Jews, and to work towards a better world hand-in-hand with us, the Jewish people.”