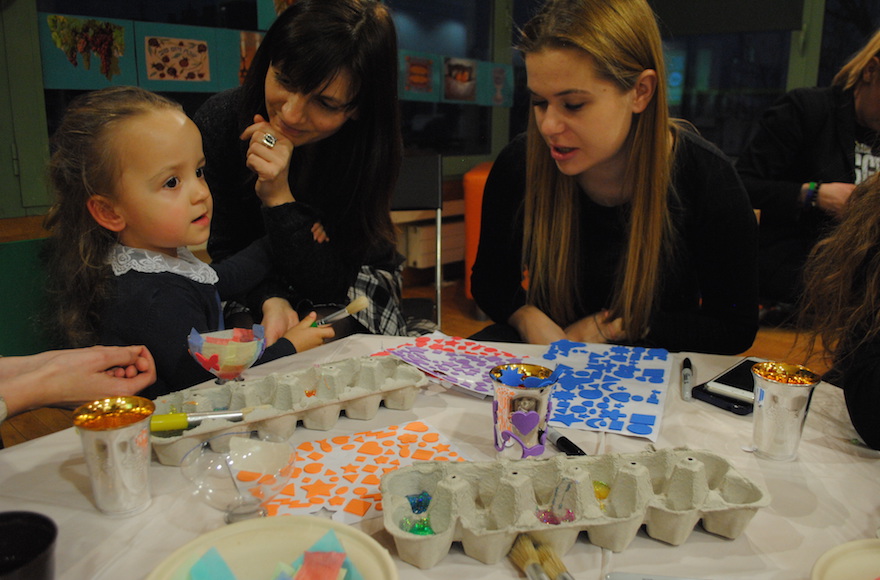 KRAKOW, Poland (JTA) — Michal Zielinski, a 47-year-old from this city, grew up unaware of his Jewish roots.

Thirty years after discovering that his paternal family is Jewish, following the death of his grandmother, Zielinski and his wife, Elizabeth are active members of the Jewish Community Center of Krakow, participating in programs with their 3 1/2-year-old daughter.

Izabela Kardash, a Polish woman, and her Israeli husband, Avichay, are parents of two daughters — a 4-year-old who speaks Polish and Hebrew, and a 9-month-old. They are also active JCC members. If circumstances allowed, Izabela says she would relocate to Tel Aviv, a city she loves.

Next week, as the school year starts in Krakow, the two families will be among the inaugural group of families at Frajda, the new child care center that will open Monday at the JCC of Krakow.

Against the odds, Frajda will become the city’s first pluralistic Jewish nursery and preschool since before World War II. The educational initiative was launched with a $500,000 lead grant from the New York-based Eric and Erica Schwartz Family Foundation (no relation to the author).

The opening of Frajda – the ribbon-cutting ceremony will come later – is a long-held dream come true for the organization’s founders, staff and many families, according to Anna Gulinska, the JCC’s director of programming, who has overseen the development of the child care center. The JCC has offered popular family-oriented programs for the Jewish holidays, a Sunday school for older children and a twice-weekly baby-sitting service.

As more families became involved, it was obvious they wanted more, Gulinska said.

“We realized we can’t really be building a Jewish future in Krakow without the youngest children,” she said.

The name Frajda, which means “joy” in Polish, has Yiddish origins.

“We hope our place will be cheerful, full of joy,” Gulinska told JTA in a phone conversation. It’s a word that also connects the two languages, she pointed out.

After several years in the planning, the excitement of the school’s opening is palpable, both she and the JCC’s ebullient director, Jonathan Ornstein, said.

Earlier this summer Ornstein, who has led the JCC since its founding, offered a visitor an informal tour of the gleaming, freshly painted new center with its shelves filled with children’s books and brightly colored toddler-size furnishings.

“This is the biggest step we have taken since opening in 2008,” Ornstein told JTA in a follow-up phone conversation from New York, where he was visiting last week.“There have been a lot of steps along the way.”

In many ways Ornstein, a native New Yorker, is not surprised that the JCC has realized its dream to open a preschool.

“It is a response to what the community is telling us they need,” he wrote in an email.

The Jewish population of Krakow dates back to the 13th century. On the eve of the Second World War, there were some 56,000 Jews living in Krakow, nearly one-quarter of the total population of 250,000, according to the U.S. Holocaust Memorial and Museum. Only about 4,000 Jews were in Krakow after the Holocaust, and the number dwindled to only a few hundred by the 1990s. 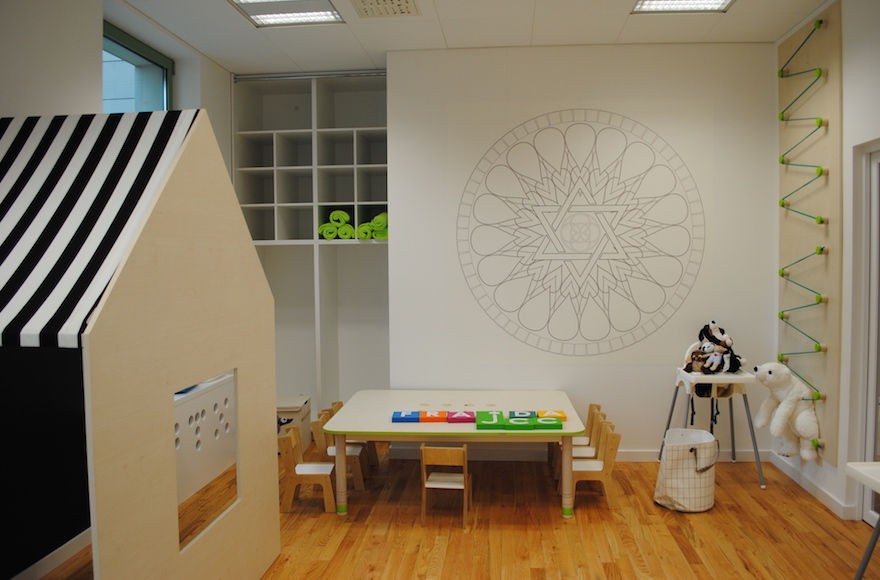 Today the Jewish population is estimated at a few thousand, including those with Jewish roots, according to Ornstein. He suggests there are about 1,000 Jews who are engaged in some form of Jewish life, and the majority are Poles whose families survived the war.

Frajda’s inaugural class includes Jews from the United States and Israel who have settled in Krakow. Ornstein also said there are now some Ukrainian Jews in the area.

The JCC is looking to raise an additional $1 million toward the future of Frajda, he said, which is being funded by tuition and fees and some support from the Polish government for early childhood education. Tuition, which the JCC is subsidizing to keep it affordable, is about $140 a month.

Enrollment at Frajda is open to JCC members, who must have at least one Jewish grandparent, Gulinska noted. Frajda, which will serve children from about a year old to 6, is opening with about 10 children and can accommodate up to 25.

The Kardash family is enrolling their 9-month-old, but were reluctant to make a change for their older daughter who attends an international preschool, Kardash wrote in an email. Next year, they plan to send her to the JCC’s weekly Sunday school.

While Kardash is not Jewish, she and her husband are eager to provide Jewish education for their children.

“We want them to know Jewish traditions while living in a Catholic country,” she wrote.

For Zielinski, becoming a parent was a turning point in connecting with the Jewish community in a deeper way.

“The most [important] breakthrough in my life was when my child was born. It was the first time when I felt a need to find other Jewish people,” he wrote in an email.

The only hesitation for Zielinski and his wife was the distance from their home. When the JCC bought a school bus to transport the children, their fears were allayed. He is also pleased that there will be an intergenerational component with the JCC’s senior club.

“I believe [Frajda] will be in the future one of the most important Jewish education places in Poland,” he wrote.

Among those the JCC turned to for guidance was Judy Wolf-Nevid, the head of early childhood at the Abraham Joshua Heschel School in Manhattan, who met with the school’s new director.

Closer to home, they also sought advice from the Lauder Morasha kindergarten in Warsaw. Founded in 1989 by a group of Jewish parents and financed by the Ronald S. Lauder Foundation, the school has grown and become a pipeline for the Lauder Morasha day school that began five years later, according to Helise Lieberman, the day school’s founding director.

The kindergarten program became an essential building block for enriching Jewish life for entire families, including grandparents, said Lieberman, now the director of the Warsaw office of the Taube Center for the Renewal of Jewish Life in Poland Foundation. The San Francisco-based Taube Philanthropies is funding the construction of a playground for the JCC preschool. Slated to open next spring in the courtyard between the JCC and the Tempel Synagogue in Kazimierz, the city’s historic Jewish quarter, the playground will be open to the neighborhood, according to Ornstein.

The kindergarten’s impact extends beyond the Jewish community, Lieberman said. Kids interact with their peers and non-Jewish neighbors in sports and later in school. In Warsaw, there have always been collaborative programs between the Lauder Morasha kindergarten and non-Jewish schools.

“It grows the maps of Jewish life and of cultural diversity,” she observed.

One challenge for the JCC will be finding professional educators who are knowledgeable enough to teach Jewish content, according to Anna Makowka, a founder of the Czulent Jewish Association in Krakow and the mother of a school-age child. The organization, initially founded by young people in their 20s and 30s, has evolved over the years and now offers a comprehensive Sunday school for kids aged 3 to 14.

In staffing the Czulent Sunday school, they have at times hired non-Jewish teachers for subjects such as art.

In a phone conversation, Makowka said she welcomes the program and is eager to see how Frajda develops its curriculum. It will fill a void for young Jewish families, she observed, adding that often the art, drama and music programs at Polish schools are centered around Catholic holidays.

Lieberman acknowledged that hiring and training Jewish educators can be among the challenges of opening the preschool, but she is confident that Frajda will draw on the experiences and resources of its big cousin in Warsaw. 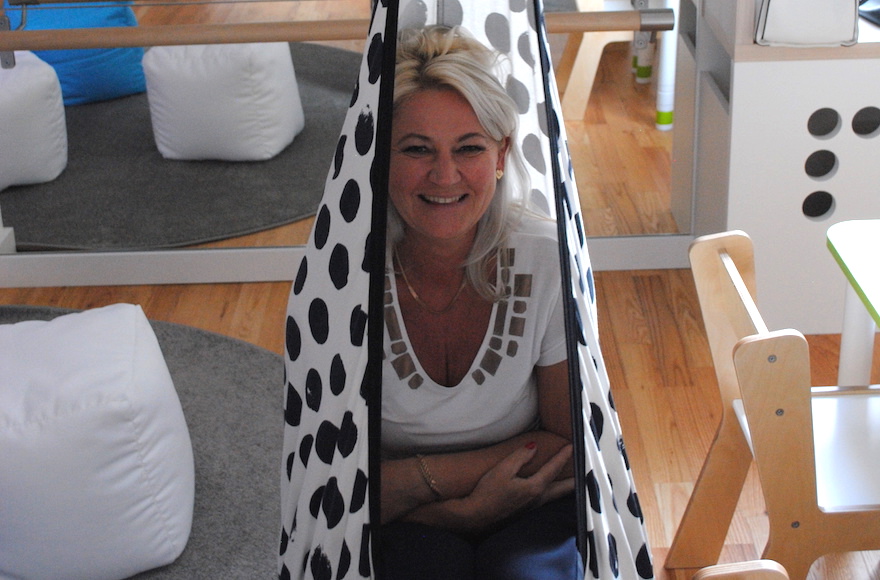