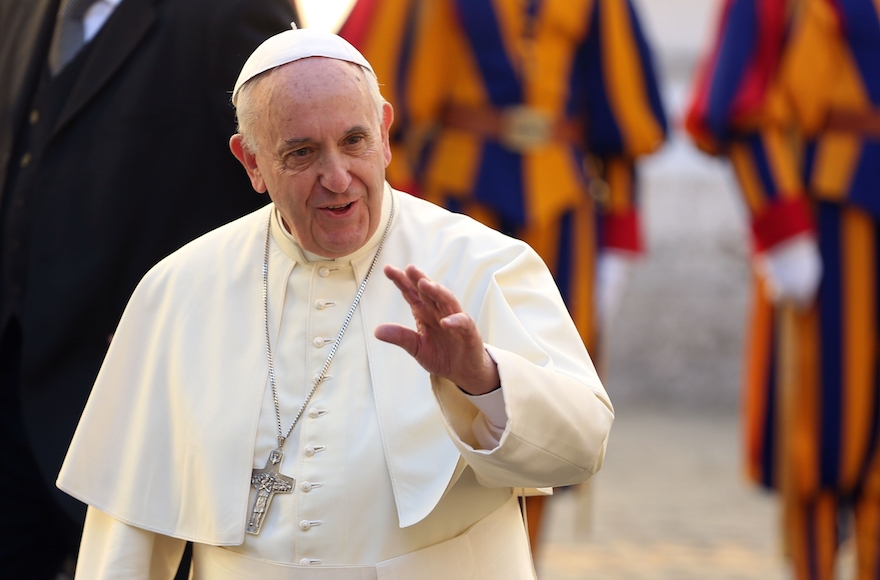 (JTA) — Pope Francis in the 1970s had weekly sessions with a Jewish female psychoanalyst to “clarify some things,” he told a French writer.

The revelation came in a dozen conversations the pope had with French sociologist Dominique Wolton, who is writing a soon-to-be-published book, The Associated Press reported Friday based on a report in the La Stampa daily in Italy. It did not note what the pontiff wanted to clarify.

Quoting from some of the conversations on Friday, La Stampa reported that the 81-year-old Francis said he went to the analyst’s home when he was 42.

“One day, when she was about to die, she called me,” the pope was quoted as saying about the analyst. “Not to receive the sacraments, since she was Jewish, but for a spiritual dialogue.

“She was a good person. For six months she helped me a lot.”

Francis then was a Jesuit official in his native Argentina, which was ruled by a military dictatorship.

In the conversations with the French author, Francis speaks highly of the positive influence women have had on his life.

“Those whom I have known helped me a lot when I needed to consult with them,” Francis was quoted as saying.

The pope also speaks of his state of mind now.

“I feel free,” he said. “Sure, I’m in a cage here at the Vatican, but not spiritually. Nothing makes me afraid.”

What bothers him, he ventured, are people with straitjacket point of views. He singled out “rigid priests, who are afraid to communicate.”

“It’s a form of fundamentalism,” the pope said. “Whenever I run into a rigid person, especially if young, I tell myself that he’s sick.”