When Israelis protest, they don’t tear down statues. They put them up. 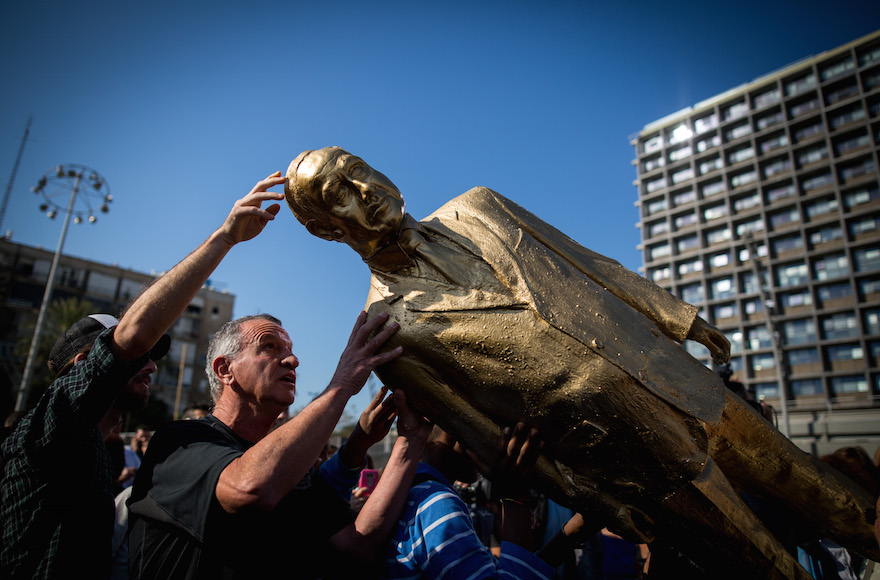 However, both statues were torn down within hours. For their creators, that was part of the point.

Israel has very few official statues of its leaders — or anyone else for that matter. The statues of Naor and Netanyahu were not erected by the government, but by artists and activists who sought to subvert rather than celebrate their subjects.

Both statues were near life-sized golden replicas of their subjects on white pedestals. Both were placed in evocative public spaces.

However, their creators had very different agendas.

On Thursday, right-wing activists put up the statue of Naor outside the Supreme Court here. Members of the Way of Life, a settler group that promotes legislation based on Jewish law, and Hebrew City, a group that opposes African migrants in South Tel Aviv, said the statue was part of a campaign against “the dictatorship of the High Court.”

The activists took issue with the Supreme Court’s ruling Monday that the government cannot indefinitely detain undocumented migrants who refuse to be deported. While the court allowed the government to continue the deportations, the five judges were unanimous in saying it could only detain migrants who do not agree to go for up to 60 days.

Justice Minister Ayelet Shaked of the hard-line Jewish Home party criticized the court Tuesday for not taking into consideration “the preservation of a Jewish majority.” Deputy Foreign Minister Tzipi Hotovely of the ruling right-wing Likud party similarly accused the court of abandoning Jewish values in favor of democratic ones.

Police briefly detained a number of activists involved in setting up the statue but quickly determined no crime had been committed. Municipal workers took it down Thursday

One of the activists told Israel’s Channel 10 that the statue was inspired by the similar one of Netanyahu set up last December in Tel Aviv’s Rabin Square. The artist behind that statue, Itay Zaliat, said he sought to test freedom of expression and get Israelis talking about their government.

“Israelis have become stupid. They don’t think,” Zaliat said Thursday. “I wanted to hold up a mirror, and get people to stop and think and talk to each other, which is exactly what happened with the statue.”

At the time, most observers understood the statue as disparaging Netanyahu, for better or worse. One passer-by reportedly accused Zaliat of “seeking to destroy the country,” while others yelled, “Well done! Well done!”

Culture Minister Miri Regev of Likud posted on Facebook that the statue was “disconnected art, whose one golden calf is hatred of Netanyahu.”

The Tel Aviv Municipality gave Zaliat a deadline to remove the statue, but just beforehand, someone toppled it.

Zaliat said he expected the statue to be taken down, but he did not support its removal. Public art is a legitimate form of expression, he argued, no matter what it is trying to say. For him, that includes the statue of Naor as well as the Confederate war monuments whose meaning and fate is being hotly debated in the United States.

“It doesn’t really matter to me what they’re trying to say,” he said. “Leave the statues alone.”

Israel has some 2,900 official monuments, or about one for every three or so square miles. But very few of them depict leaders, or even people.

“Israelis tend to be uncomfortable with statues of their leaders,” said Maoz Azaryahu, a researcher at the University of Haifa, who studies monuments. “They see them as golden calves.”

Azaryahu pointed out that the handful of exceptions proves the rule. The statue of Prime Minister David Ben-Gurion at the Tel Aviv airport is just a bust, as is that of Prime Minister Yitzhak Rabin near the site of his assassination in Tel Aviv. The statue of British Zionist Alfred Mond in the town he founded, Tel Mond, is an abstract representation. And the one in North Tel Aviv of Swedish diplomat Raoul Wallenberg, who saved tens of thousands of Jews during the Holocaust, is a replica.

Far more common in Israel are monuments like the Holocaust memorial in Rabin Square, which is comprised of two interlocking metal pyramids. Azaryahu said this is partly because Israel was founded after World War II, when abstract art was in fashion. But he said officials embraced the style as in line with Jewish tradition.

Contrary to Zaliat, David Stav, a leading Orthodox rabbi, said Israelis are “very, very smart” about their leaders. He said their aversion to memorializing them is rooted in the Jewish prohibition against idolatry. Today, he said, that manifests as a more general skepticism of personalities.

“Jewish tradition does not encourage admiring individuals, but rather admiring ideals,” he said, noting that the Torah is conspicuously silent on the location of Moses’ grave. “Directly and indirectly, this affects Israeli society, and it makes us scared of raising people up and making statues of them.”

Azaryahu agreed. He said Israel’s “anarchic” political culture makes it difficult for heroes to emerge, let alone last long enough to get their own statues. Even one-time heroes like Ben-Gurion or Defense Minister Moshe Dayan were eventually “demolished,” he said.

“You don’t have a hero cult in Israel, like in Roman and later European and American tradition,” Azaryahu said. “For someone to become a statue, they need to be shrouded in myth, and you can’t have that here. It’s too small a family.”

Naor and Netanyahu, both of whom have been at the highest levels of government for the past decade and more, have recently come under growing public pressure. Weekly protests outside the attorney general’s house demanding he bring to a close two corruption probes of Netanyahu have been growing for months. And last week, some 100 residents of South Tel Aviv gathered outside Naor’s house in Jerusalem to protest what they said was the court’s inaction on deporting African migrants.

Naor will retire from the Supreme Court next month, when she reaches the mandatory retirement age of 70. There is no term limit for the prime minister of Israel.