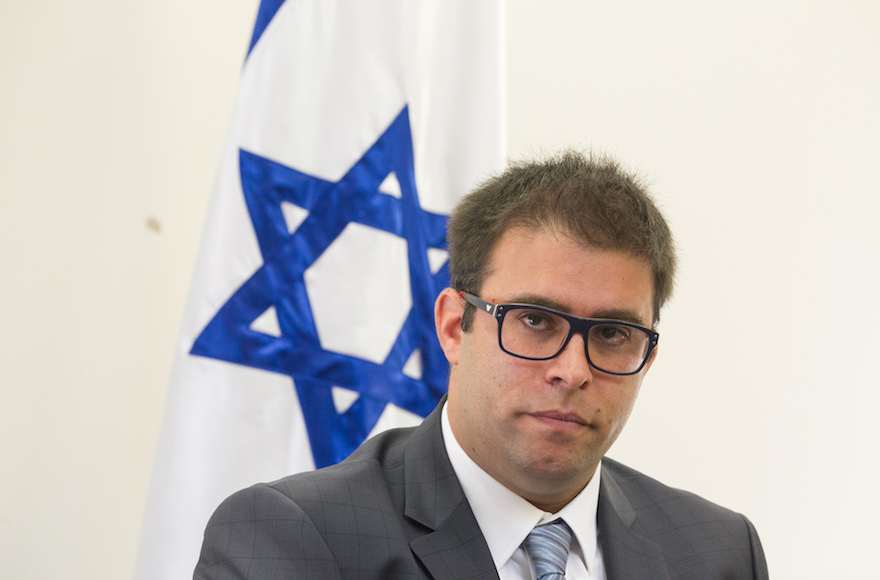 Oren Haza, a Likud lawmaker, holding a press conference at the Knesset in Jerusalem, Israel, announcing that he submitted a lawsuit for NIS 1 million against Channel 2 reporter Amit Segal for libel, Oct. 12, 2015. (Miriam Alster/Flash90)
Advertisement

JERUSALEM (JTA) — Israeli lawmaker Oren Hazan will be indicted for allegedly assaulting a West Bank mayor and City Council leader three years ago, before he entered the Knesset.

The office of Attorney General Avichai Mandelblit announced Monday that it will indict Hazan, of the ruling Likud party, for attacking the mayor and the chairman of the Ariel City Council over money the city claimed his mother owed for property taxes on the family’s restaurant business.

Hazan has 30 days to request parliamentary immunity. The official indictment could come as early as December.

Hazan has called the October 2014 altercation a small incident that got out of hand where both sides bear some responsibility, according to The Jerusalem Post.

Hazan has been accused of sexually assaulting female employees at a bar he owned in Tel Aviv, doing drugs with and procuring prostitutes for guests at a casino he managed in Bulgaria, and twice making fun of a fellow Knesset member for being disabled. He was reprimanded in July by the Knesset’s Ethics Committee for insults against female lawmakers. Last December, his driver’s license was suspended for driving 30 miles over the speed limit on a highway.

During President Donald Trump’s May visit to Israel, Hazan was reprimanded for taking a selfie with Trump in the receiving line during the welcome ceremony at Ben Gurion International Airport for the president and first lady.