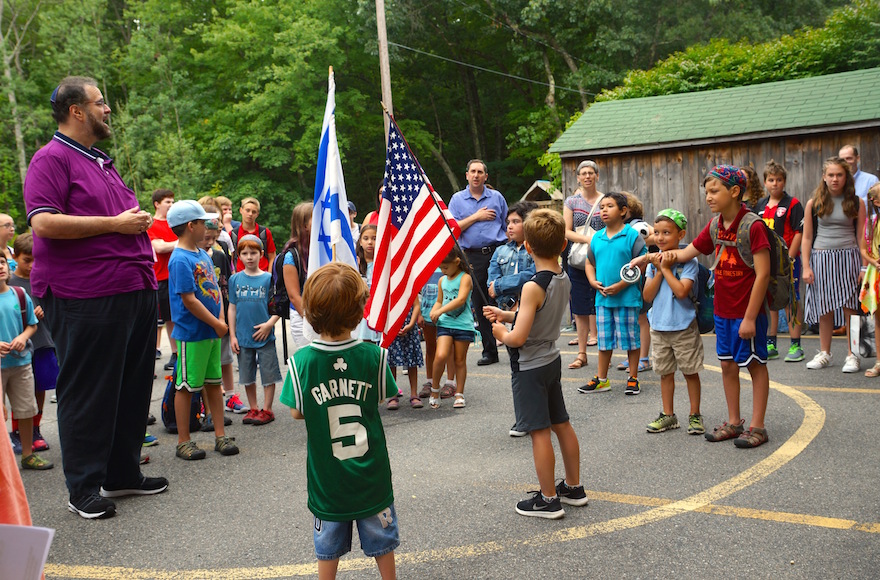 BOSTON – When the Jewish Community Day School in Watertown, Massachusetts, decided several years ago to hire a former MTV producer to bring a “fresh voice of Jewish spirit” to the school, it was part of a broader goal: to bring the joys of summer camp to the school year.

The institution already was on its way. A tradition had begun on Yom Kippur eve wherein the whole school dresses in white and heads to a bridge over the Charles River, where they sing, listen to stories and throw birdseed into the water as part of the traditional tashlich ritual of casting away sins.

After hiring the producer, Oren Kaunfer, as a spiritual educator, he began leading the service.

“Everyone is sitting on the ground. It’s got a camp feel to it,” Kaunfer said. “It’s taking Jewish experiences and making them more memorable and exciting and deepening them.”

“When trying to describe my job, I do often say, ‘I bring camp to school,’” he said.

What that means, Kaunfer explained, is connecting students with “joyful Jewish experiences.”

“There’s definitely a lot of guitar involved, or mandolin, or whatever instrument I am holding at the time,” he said.

The annual transition from summer camp’s informal and highly spirited atmosphere to the more regimented, high-pressure and maybe even occasionally boring environment of school long has been one of the jarring changes of fall, right up there with cooler nights and earlier sunsets.

Yet increasingly, the differences between school and camp aren’t as stark as they used to be.

In Toronto, a delegation of 24 young Israelis who spent their summer serving as camp counselors and waterfront staff are staying on for the school year to teach about Israel in the city’s Jewish day schools. At Lander-Grinspoon Academy in Northampton, Massachusetts, students spend some of their time picking crops at Abundance Farm, an adjacent Jewish farm. At Krieger Schechter Day School in Baltimore, students who miss participating in their camp musical get a chance each year to participate in one English-language play and another Hebrew-language play.

The trend of Jewish schools trying to integrate more of the positive elements of camp into the school year — without sacrificing academic rigor — mirrors what’s going on in American education overall. Schools increasingly are emphasizing informal, experiential and project-based learning rather than lectures, worksheets and drills. This approach, the thinking goes, will better prepare students to be lifelong learners in the global economy and the internet age.

With Jewish education, there is particular interest because research has found that the Jewish identity-building benefits of summer camp are particularly strong.

“Adults who had a Jewish overnight camp experience as children are significantly more likely to exhibit Jewish behaviors as adults,” said University of Miami demographer Ira Sheskin, one of the co-authors of a 2012 study called “Camp Works: The Long-Term Impact of Jewish Overnight Camp.”

“They are more likely to marry other Jews, to join synagogues, to light Shabbat candles, etc. The more Jewish day schools can bring into the classroom the elements that have made camp so successful in building Jewish identity – those immersive, informal interactions with other Jews in a ‘soft’ Jewish environment — the more likely schools are to increase their already positive effects on students’ Jewish lives.”

The key, of course, is not just to bring elements of camp into the classroom, but to do so in a way that enhances day schools’ Judaic and academic rigor.

Schools are adopting a variety of camp-like tactics and strategies, including mentor relationships between older and younger students, character education and field trips, noted Rabbi Avi Orlow, vice president for program and innovation at the Foundation for Jewish Camp.

MetroWest Jewish Day School in Framingham, Massachusetts, has instituted several camp-like elements. Teachers are called by their first names to make them more accessible. The school day begins with an outdoor meeting of the whole school featuring announcements and the singing of “Hatikvah,” the Israeli national anthem. Preparation for the school science fair — which at other schools often means extensive parental involvement in everything from shopping for supplies to choosing an experiment — is entirely school-based, meaning “students get a chance to explore what they are actually interested in,” said Beth Null, the school’s director of community advancement, crediting the changes to head of school Scott Sokol, an alumnus of Ramah New England.

“‘What can we do to make school feel more like camp’ is very prevalent,” said Bil Zarch, director of Camp Yavneh, a Jewish overnight camp in New Hampshire. Having also served as head of school at Jewish day schools in Baltimore and Massachusetts, Zarch has seen both sides of the issue.

When his own child attended Lander-Grinspoon Academy, Zarch said, the school marked the Jewish harvest festival of Sukkot by having students harvest crops on the adjacent farm, learning about the biblical commandments of pe’ah and leket, and then delivering the harvest to a food pantry that helps low-income families and individuals.

“The kids got so much out of that lesson,” Zarch recalled.

At American Hebrew Academy, a Jewish boarding school in Greensboro, North Carolina, the school is situated on a 100-acre wooded campus with a lake — intentionally designed with “camp-esque components,” according to the academy’s CEO, Glenn Drew. The school facility also is used during the summer as a Jewish athletic camp.

The Jewish camping component “always has been central” to the 16-year-old boarding school, Drew said.

“It makes 100 percent sense to me,” he said. “It’s a completely immersive experience.”

Of course, summer camps and residential schools can give youths something that day schools, even the ones trying hardest to be camp-like, may have a tough time replicating: distance from home.

“Being away from parents allows children to explore,” Drew said, and exposes them more to “peer-to-peer education — the influence of a large group of peers that are engaged in similar activities.”

Wendy Grinberg, director of Jewish education at the Reform movement’s URJ Eisner Camp and a doctoral candidate in the field of education, said schools should consider what specific things about camp they want to emulate.

She suggested the benefits of social-emotional learning, strong camper-counselor relationships, project-based learning, cultivating students who are more independent and less stressed out, natural lived Judaism, real-life experiences, younger role models, leadership roles for kids and the freedom to try things. Those are elements that can enhance what schools already do without compromising deep and engaging learning.

Day schools have to contend with many constraints absent from camp, including state mandates, grades and report cards. Increasingly, though, educators are realizing that the team building, leadership and energy of a summer camp-like experience may be critical to preparing students for college — and for life.

“Jewish day schools have made capacity building their central mission, and indeed they do a terrific job in imparting Jewish literacy. But they realized they also need to do a great job of identity building,” said sociologist Steven M. Cohen, a research professor at Hebrew Union College and co-author of the 2012 “Camp Works” study.

“Building relationships, emotionally laden experiences and lifelong memories are the ways camps have built identity, and now day schools are finding ways to fit that into what they do, too.”