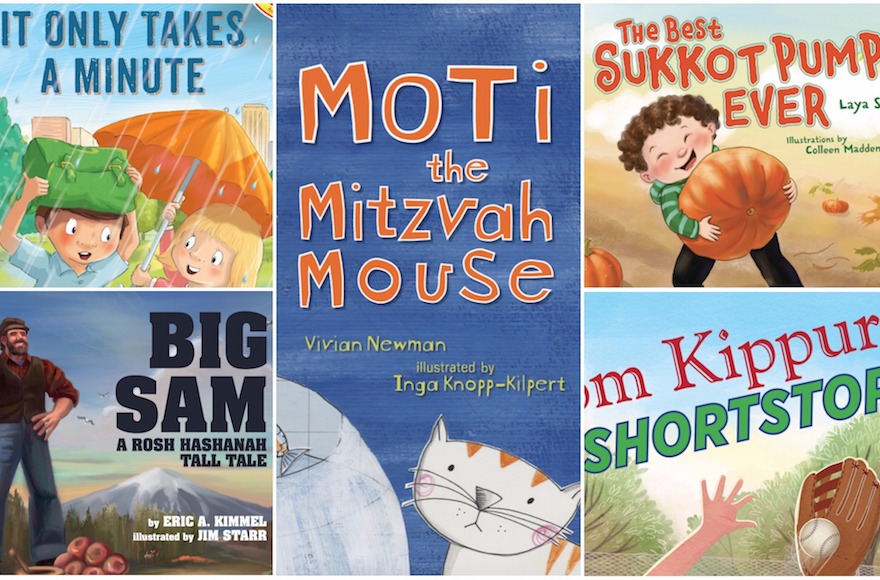 (JTA) — A challah-baking Jewish giant, a young baseball champ and an endearing boy in a pumpkin patch are among the stars of five delightful new books for kids published just in time for the High Holidays.

This year’s crop includes new stories by two of the country’s most prominent children’s book writers, David A. Adler and Eric A. Kimmel, who have entertained and informed decades of young readers. Three of the books are set during the holidays — Rosh Hashanah, the Jewish New Year; Yom Kippur, the Day of Atonement; and Sukkot, the seven-day fall harvest festival.

Two others are uplifting, kid-centered stories about good deeds and repairing the world — themes that reflect the spirit of the holidays as a time for reflection as well as renewing commitments to do better in the year ahead. 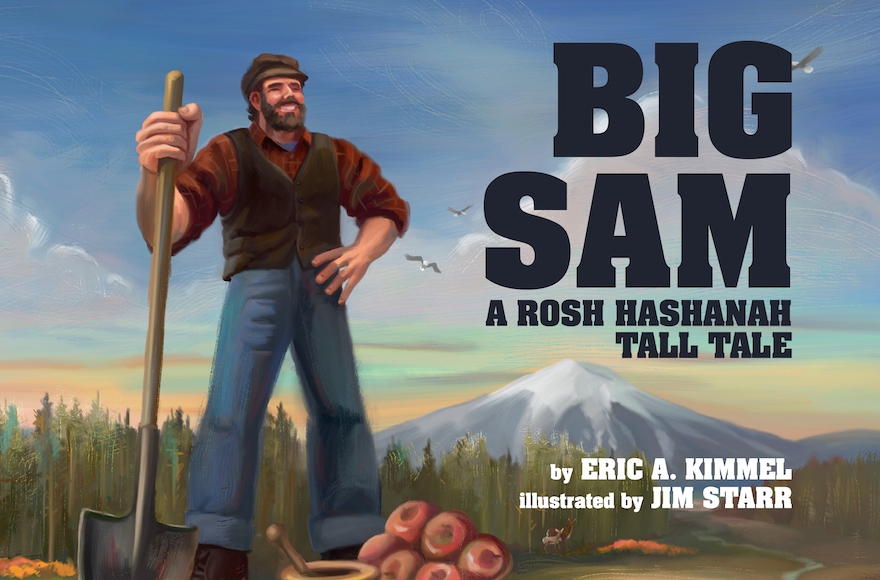 Samson the Giant, known as “Big Sam” to his friends, sets out to make a giant round challah in preparation for Rosh Hashanah. Big Sam begins by digging a big hole – the Grand Canyon — to use as a mixing bowl. Step by massive step, Big Sam crisscrosses the U.S., filling his bowl with a mountain of flour, a lake of oil, thousands of eggs and more. For water, he dams up the Colorado River and then whittles a giant California redwood into a spoon for stirring.

But before he can celebrate the holiday, two bald eagles caution the giant that he’s caused an awful lot of damage to the environment — flattening hills and threatening habitats. In the spirit of the holiday, Big Sam considers his misdeeds and sets about to make things right. When he’s finally ready to dig in to the huge challah, Big Sam welcomes in Rosh Hashanah with his American tall-tale pals – Paul Bunyan and Slue Foot Sue among them. 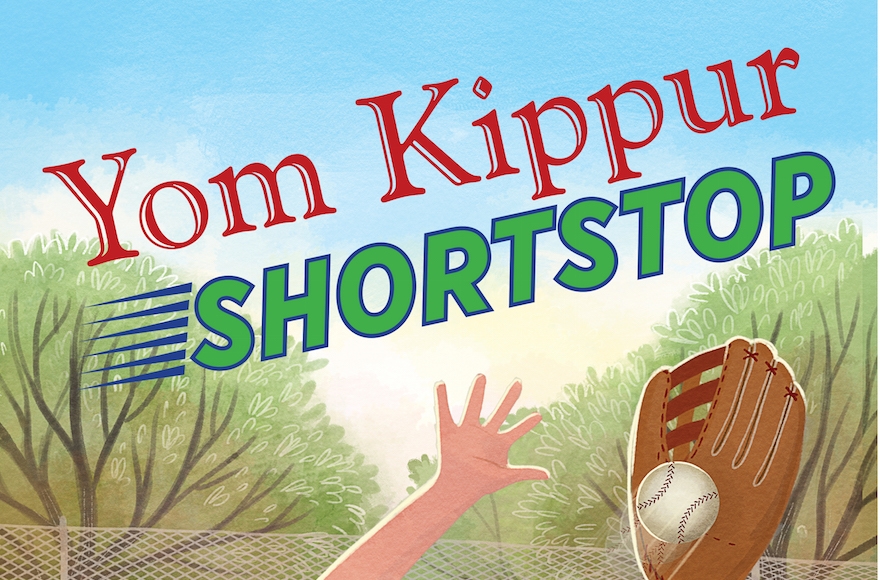 The story opens as a young boy named Jacob makes the winning catch in the last inning of his Little League game. If they win the next game, they’ll be the champions — but the final game is on Yom Kippur. After reminding Jacob that Yom Kippur is an important holiday, Jacob’s father says, “Think about what you want to do.”

Over the course of the next few days, Jacob does just that. Will he go to the game or spend the day at synagogue with friends and family, observing the holy Jewish day? No spoilers here, but Jacob eventually realizes that he’s part of many teams: his family, friends, his people and Little League.

This relatable, deftly told story taps into the reality facing many American Jewish families today – the conflicts between Jewish holidays and the secular calendar of school, sports, recitals and other activities. The story is, of course, inspired by the Jewish baseball legend Sandy Koufax, who sat out the opening game of the 1965 World Series because it was Yom Kippur. In his author’s note, Adler introduces the Hall of Fame pitcher to his young readers. 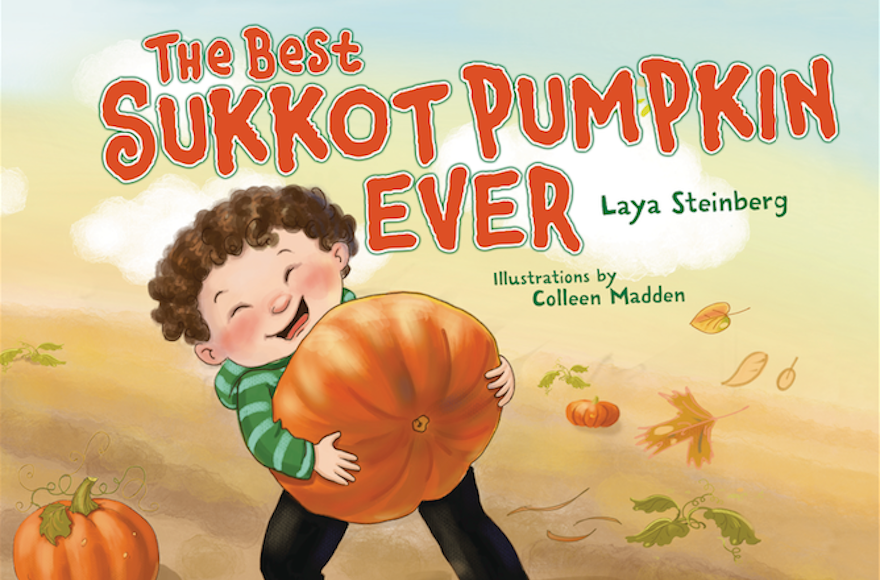 “The Best Sukkot Pumpkin Ever” (Kar-Ben)

Micah can hardly contain his enthusiasm for picking pumpkins at Farmer Jared’s pumpkin patch. He and his family join others from their synagogue who are helping the farmer pick the last of the season’s pumpkins to donate to a soup kitchen. Micah, however, thinks he’s searching for the perfect pumpkin to decorate his family’s sukkah, the temporary hut Jewish families build to celebrate the fall harvest festival of Sukkot.

In this warm tale, Micah learns about generosity — he picks many more “perfect” pumpkins, turning them over to Farmer Jared to use to help feed the hungry. But what about Micah’s own sukkah? As the day at the farm comes to an end, Micah is unexpectedly delighted when he discovers that a pumpkin headed to the compost pile offer up seeds he can plant for next year’s “perfect” Sukkot pumpkin. 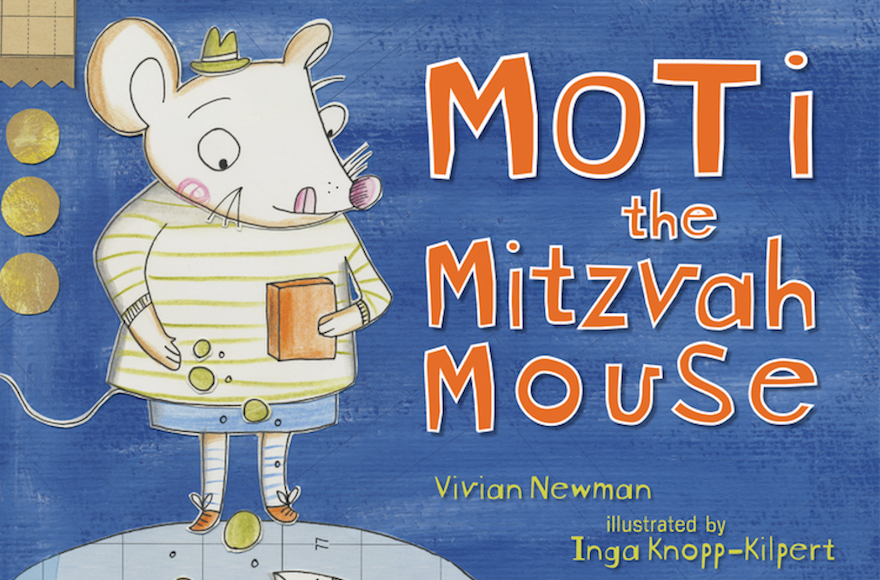 Moti, a busy little mouse with a big heart, lives under the sink at the Bermans’ house. When the Berman kids — and the family cat — are asleep, Moti secretly wanders the house finding ways to be helpful. Each page finds Moti doing a mitzvah: He feeds the fish, he puts away misplaced toys, he collects loose coins left around and puts them in the tzedakah box.

Lively illustrations make this an engaging, interactive read that kids will want to read again and again.

It Only Takes a Minute
By Bracha Goetz; illustrated by Bill Bolton
Hachai Publishing; ages 2-5 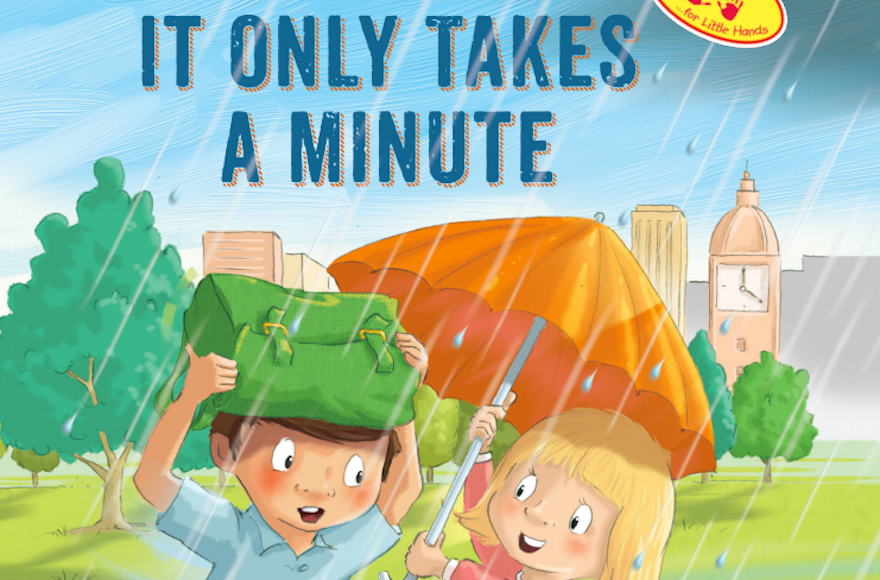 “It Only Takes A Minute” (Hachai Publishing)

A young boy in a haredi Orthodox family discovers that small acts of kindness can make a big difference —  when he remembers to do them, of course. Throughout the book, the boy learns “it only takes a minute” to do good deeds, such as saying “thank you” or to thoughtfully say a bracha – a blessing – even when he is rushing for the school bus. At a soccer game, he takes a minute to appreciate the nature around him. While aimed at traditional religious families, the narrative touches a universal chord: that even young kids can, and should, make the effort to do what is right.