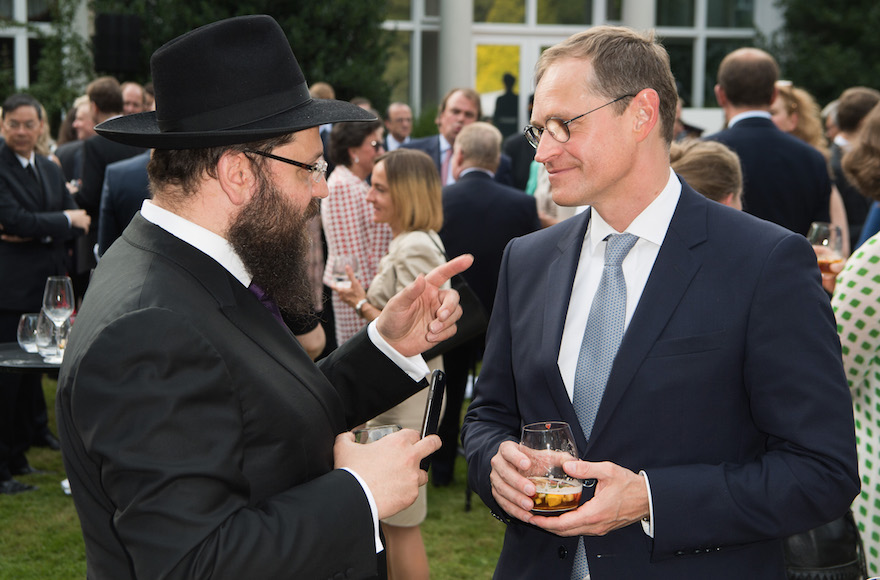 (JTA) — Berlin’s mayor will block the use of city venues and funds by groups or event organizers that support the boycott movement against Israel.

The move, announced Wednesday, followed pressure by the Los Angeles-based Simon Wiesenthal Center, which had threatened to put Berlin Mayor Michael Müller on its annual list of 10 worst anti-Semitic incidents for his alleged failure to strongly condemn BDS and other extreme anti-Zionist activities in the German capital.

Müller, in a statement co-released with the Central Council of Jews in Germany, asserted that his decision was not a change of heart on his part but rather an intensification of his already pro-Israel stance.

Jewish leaders, including Central Council head Josef Schuster, had rushed to defend the mayor as a staunch supporter of Israel following the Wiesenthal Center’s accusations. But they did say they wished he would be tougher on virulent anti-Zionism, represented by the Boycott, Sanctions and Divestment movement against Israel.

Berlin is now the third German city, after Munich and Frankfurt, to declare plans to stymie such activities.

Müller, who has been supportive of Israel in the past, pledged Wednesday to “continue emphasizing my clear stance for Israel and against anti-Semitism and racism.”

BDS tactics of “standing with anti-Semitic signs in front of Berlin shops” are tantamount to “the intolerable methods used in the Nazi era,” he said. “We will do everything in our power to prevent the use of our venues and funds for BDS’ anti-Israel incitements” and against the annual Al-Quds Day demonstration, an anti-Israel march initiated by Iran’s Ayatollah Khomenei in 1979.

In a statement, the Wiesenthal Center applauded the mayor’s pledge to halt municipal financial and logistical support for the BDS movement. In its annual anti-Semitism tally, the center often equates BDS activity with anti-Semitism.

“The mayor showed true leadership in denouncing BDS for what it is: an anti-Semitic, anti-peace campaign,” said Rabbi Abraham Cooper, the Wiesenthal Center’s associate dean and director of Global Social Action. “He has emphatically added his important voice to the global efforts to defeat extremists dedicated to the demise of the Jewish state.”

Müller also pledged to continue the fight against anti-Semitism in Berlin schools.

The mayor added that he would use all legal methods at his disposal to achieve his goal, which would be “at best a ban” on such activities and “at the very least strict regulations and prosecution of all violations.”

Schuster described the move as a “positive signal for the Jewish population and for society in general,” and urged the mayor to follow through swiftly.

“All political parties must clearly decry anti-Semitism, whatever the origin,” he said.