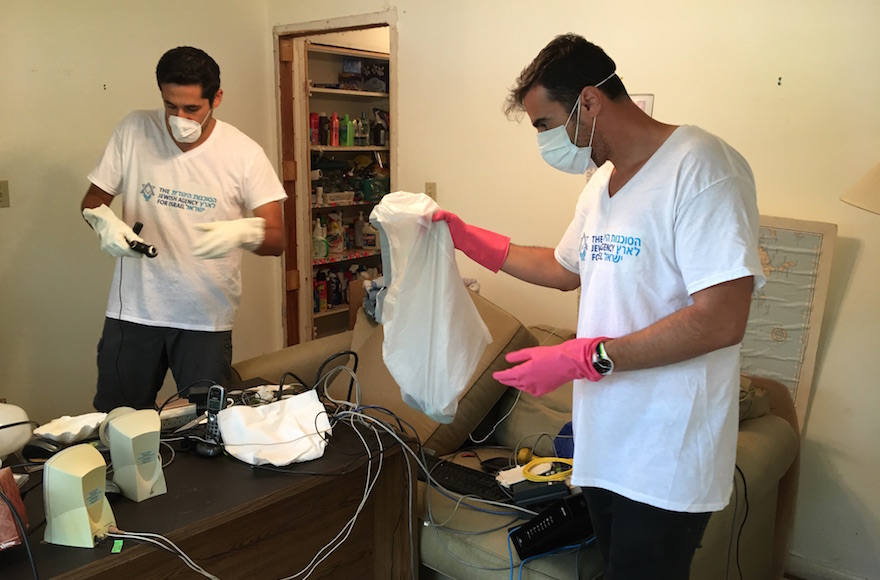 Jewish Agency emissaries assisting recovery efforts in Houston in the wake of Hurricane Harvey. (The Jewish Agency for Israel)
Advertisement

A dozen students from Yeshiva University in New York spent the Labor Day holiday weekend in the Texas city helping families clear out their flood-damaged homes and salvage any belongings. The students, who stayed with families whose homes were not damaged by last week’s massive flooding, also packaged food for those in need, according to the student newspaper, the YU Commentator. More than 100 students vied for the 12 spots, which were chosen by lottery. Three students from the Houston area were among the volunteers.

Ten teenagers from the New Jersey region of NCSY, the youth movement of the Orthodox Union, also spent the holiday weekend in Houston helping with salvage efforts.

Hurricane Harvey, which made landfall on Aug. 25, destroyed nearly 800 homes in Harris County and damaged over 119,000, the Houston Chronicle reported.

Meanwhile, 50 Chabad-Lubavitch rabbis from across the United States arrived in Houston on Tuesday night to visit families in private homes in flooded areas, as well as area schools, synagogues and shelters. The rabbis also brought nearly $5,000 in gift cards in small denominations for distribution to those in need.

The San Francisco-based Taube Philanthropies made a $1 million emergency challenge grant to support relief and rebuilding efforts. The challenge grant was issued to All Hands Volunteers, a U.S.-based disaster relief organization that relies on a network of volunteers to help those affected by natural disasters all over the world. All Hands is in the process of establishing and leading a volunteer reception center intended to recruit, activate and manage thousands of volunteers.

The Abeles & Heymann kosher deli company set up a crowdfunding page to send kosher salami “to the kosher community of Houston just in time for the Jewish New Year.” The company said it will match each purchase of a kosher salami with a second salami.

The goal of the GoFundMe campaign is to raise $15,360 to ship two full pallets, or 3,072 salamis, for distribution by the Jewish federation in Houston. As of Wednesday, some 99 people had donated $3,454.

Students from the Fuchs Mizrachi Jewish Day school in Cleveland are raising money to help the United Orthodox Synagogues, a congregation in Houston’s heavily Jewish Meyerland neighborhood, replace the thousands of religious books destroyed in the flooding.

“We contacted UOS to learn about their needs, and have decided to focus our community effort on ensuring they have siddurim and machzorim so they can enjoy Shabbat and the upcoming chaggim with one less concern,” a post on the Ohio school’s Facebook page read.

A delegation of emissaries from the Jewish Agency for Israel working as Israel Fellows at campus Hillels on the West Coast helped residents vacate flooded or abandoned homes and salvage belongings. The emissaries also planned to run educational programming for Jewish children sent to day camps due to school closures and neighborhood evacuations, according to the Jewish Agency. Their work is being conducted in coordination with local aid groups, the Jewish Federation of Greater Houston and the Consulate General of Israel in Houston.

The Yeshiva University students launched a crowdfunding campaign to help them pay for the supplies they would need, including dust masks, safety goggles, work gloves and other tools for salvage operations.

Chaim Nissel, the university’s dean of students, who accompanied the volunteers, is a mental health professional with expertise in trauma relief and grief processing. He ran workshops for congregants of the United Orthodox Synagogue and the teachers and guidance counselors at Houston’s Beren Hebrew Academy on how best to support the city’s children in the aftermath of the flooding.