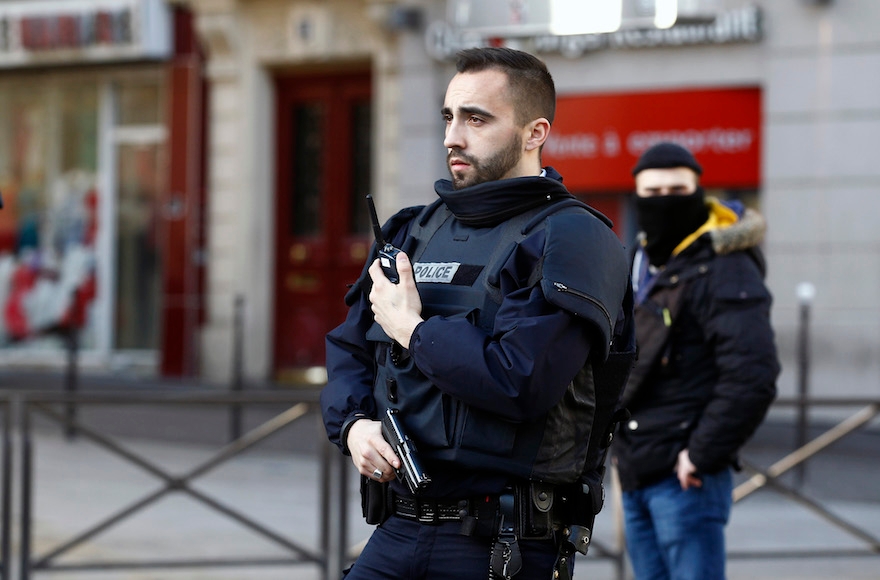 (JTA) — A French Jewish leader and his family were assaulted in their home near Paris in what representatives of French Jewry said was an anti-Semitic attack.

In the attack Thursday night, three men, two of whom were wearing masks, broke into the home of Roger Pinto, the president of Siona, a group that represents Sephardic Jews. The attackers beat Pinto’s son and wife in the home in the northeastern suburb of Livry Gargan, the Dreuz news website reported Sunday.

One of the attackers said: “You Jews have money,” according to the family members.

The family members told police that the attackers, who they said were black men in their 20s or 30s, took their credit cards and jewelry, interrogated them for hours about additional items them could steal and threatened to kill them. The men ran away after Roger Pinto managed to discretely call rescue services on a mobile phone.

The Pintos were taken to hospital for treatment. They suffered some minor injuries and were deeply traumatized, the report said.

The incident, one of several cases in France in recent years in which criminals apparently singled out Jews based on the belief that they have money, provoked passionate condemnations from the CRIF umbrella group of French Jewish communities and the National Bureau of Vigilance Against Anti-Semitism. Both groups said the incident was an anti-Semitic attack.

Bernard-Henri Levy, the French Jewish philosopher, agreed, writing on Twitter Sunday: “Shocked by the anti-Semitic attack Friday night [sic] in Livry-Gargan. Solidarity with Roger Pinto and his family, the victims.”

In an unusual move, the Israeli ambassador to France, Aliza Bin-Noun, also condemned the incident on Twitter and asserted it was an anti-Semitic attack.

In 2014, three men broke into the home of a Jewish family in Creteil near Paris. One of them raped a young woman there while another guarded her boyfriend, whom they took prisoner. A third took the couple’s credit card to extract cash from an ATM machine. They too allegedly said they targeted the couple because they are Jewish.

Occurring amid a major increase in anti-Semitic violence in France accompanying Israel’s war with Hamas in Gaza that year, the Creteil incident echoed for many the traumatic murder and torture in 2006 of Ilan Halimi, a Jewish phone salesman who was abducted by a gang led by a career criminal with a history of targeting mostly Jewish victims.

Some French Jews regard Halimi’s murder as the turning point in the emergence of a wave of violence against Jews in France and Belgium, in which more than 12 people have died since 2012 in at least three jihadist attacks on Jewish targets.