In Elie Wiesel’s hometown, hundreds protest anti-Semitism by retracing his walk to be deported 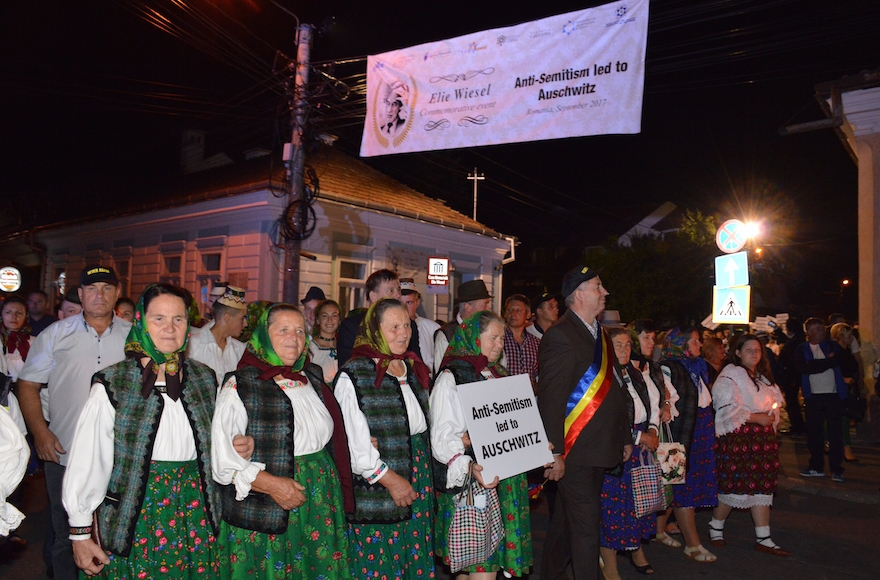 SIGHET, Romania (JTA) — More than 70 years after fascists took Elie Wiesel to the train station of this sleepy city in Romania, hundreds of its residents retraced his steps in a march to protest against anti-Semitism.

The march Sunday night, organized by local authorities and the Limmud FSU Jewish learning group and co-sponsored by the Claims Conference, began at the home where Wiesel, arguably the world’s most famous Holocaust survivor and a Nobel prize laureate who passed away last year at the age of  87, was born and ended where in 1944 he boarded with his family a train to the Auschwitz death camp.

The march drew participants, Jews and otherwise, from far and wide. Dozens of them wore traditional clothing in a bid to emphasize that Wiesel is no less a part of the local heritage than its other elements, Sighet Mayor Horia Vasile Scubli said. At the end of the march, the local train station was renamed after Wiesel, a journalist and author whose company and advice was sought by world-renowned philosophers and statesmen alike, including several US presidents.

Occurring amid a rise in anti-Semitic hate crimes in Western Europe, the event in Sighet was a “powerful reminder that we are not alone as we used to be,” said Chaim Chesler, founder of Limmud FSU. “When fascists marched Elie Wiesel and his family with the knowledge of the local population, they were isolated, branded and silenced. Now we walk united, loud and hand in hand.”

This message resonated with many non-Jews as well.

Mario Golen, a Romanian homosexual man in his 30s, drove for an hour to Sighet the attend the march with his life partner of three years, John. “I’m not Jewish but I could have been on those trains as well, or worse, if I were born when Elie Wiesel was born,” he said, referencing the Nazi murder and persecution of homosexuals. “So the least I can do is come to see where Elie was born and walk a mile in his memory.”

But for many of the Jewish participants of the march through the unlit streets of Sighet, a city of 37,000 that used to be part of Hungary during the Holocaust, the event was also a stark reminder of the scope of devastation of Hungarian and Romanian Jewry during the Holocaust, when the Nazis and their collaborators killed a million Jews from those countries alone.

Romania, once home to 800,000 Jews, now has about 7,000 of them, including a few dozen Jews living in Sighet. In Hungary, which also used to have a close to one million Jews, now live only 100,000. “Nobody speaks of the mass theft, conducted on a state level, by private people, in Hungary today,” said Robert Frolich, the chief rabbi of Hungary for the Federation of Jewish Communities of that country. Although Hungary has been more forthcoming than Romania in offering restitution for Jewish-owned property, there too “the issue is taboo,” Frolich said.

Despite the existence of many events in those countries emphasizing the need to fight anti-Semitism – the march in Sighet was held under a banner reading: “Anti-Semitism led to Auschwitz” – Holocaust denial and revisionism remains a problem in both.

In Hungary, the mainstreaming of anti-Semitic rhetoric appears to be a fait accompli amid a fight for nationalist votes between the ruling Fidesz party and the far-right Jobbik party. And Romania, which has so far resisted offering restitution for countless assets stolen from Jews during and after the Holocaust, the denial of the Holocaust persists even among some politicians and scholars, despite the fact that it is illegal.

It was point addressed by Yair Lapid, a prominent opposition lawmaker from Israel with Hungarian roots who attended the march (Gila Gamliel, Israel’s minister for social equality, was also present at the event.) Mindful of how hatred of Jews has survived and evolved even in places where few people have seen a Jew in real life, Lapid said: “Now as in the 1940s, anti-Semites only understand force. And this event, it advertises our strength – the Jews and non-Jews who oppose it.”