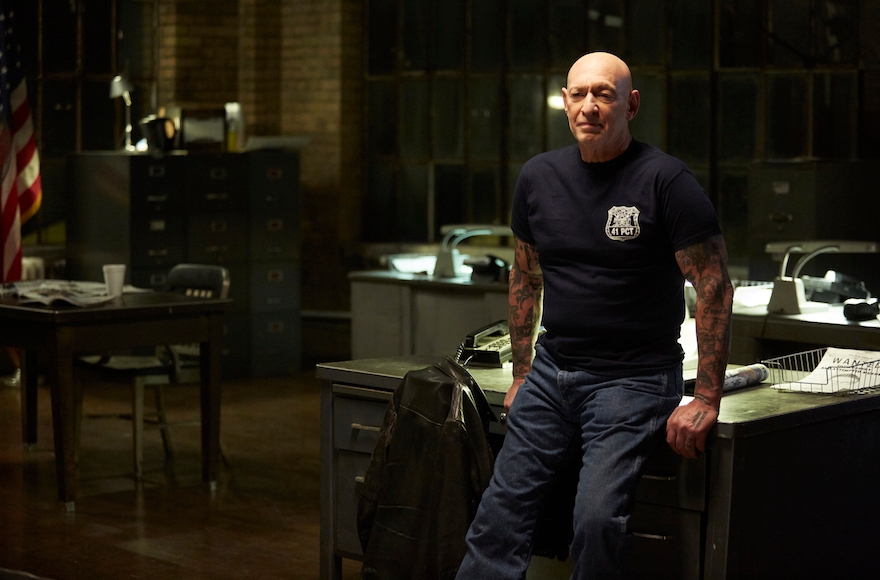 (JTA) — There are almost as many reality cop shows on television as there are Real Housewives. “Cops” is the granddaddy of them all, in its 30th season, plus there’s “Night Watch” and “Live PD,” to name just a few.

The newest is “Street Justice: The Bronx,” which premieres Sept. 19 on the Discovery Channel.

The series’ trailer features a heavily tattooed, muscular older gentleman, head shaven, wearing a 41st Precinct T-shirt. As dramatic music pulsates in the background, he describes how dangerous the streets of the Bronx were in the 1970s, when he patrolled there. Words flash on the screen describing him as the most decorated detective in NYPD history.

And then he introduces himself: “My name is Ralph Friedman and these are my stories.”

From the get-go, it’s clear that this cop isn’t like all other cops. Friedman, 68, made over 2,000 arrests and earned 219 department awards, plus another 36 civilian honors. He was cut by knives and razors, and had bones broken by tire irons. (Never shot, thankfully.)

And then there is his background: Friedman grew up in a largely unobservant Jewish family in the Kingsbridge section of the Bronx, only a few subway stops north of Yankee Stadium. He remembers staying home on the High Holidays and studying for his bar mitzvah, but “never pursued anything further than that.”

After high school, he took a job with a moving company making $4.50 an hour.

“That was tremendous back then because everyone else was making $1.15,” he said.

On a lark, Friedman accompanied some friends who were taking the police civil service exam. He passed and was called in nine months later.

“Being a cop you could have a future, even without a college degree,” he said. “If I stayed a mover, I’d be lifting that same refrigerator for 30 years.”

Friedman joined the NYPD Shomrim Society — the association of Jewish cops — from the moment he took the job, and is still a member. Today there are approximately 3,000 Jews in the New York Police Department in a total force of 34,000.

Still, Friedman’s decorated career lasted just 14 years — his time at the NYPD cut short, ironically, not by a bad guy but a fellow cop. The “coup de grace that ended my career,” he said in a telephone interview, occurred when he and a partner were racing in an unmarked car to a signal 10-13 — “officer needs assistance” — and were struck by a blue-and-white police car rushing to the same call.

His car was T-boned right where he sat, resulting in 23 broken bones, a hip shattered into 100 pieces and a disability pension. It took him more than two years to recover.

Unable to work, Friedman traveled and worked around his house. But his quiet existence changed in 2015, when the New York Post did a major story about him that caught the attention of St. Martin’s Press. In July, the book publisher brought out his memoir, “Street Warrior: The True Story of the NYPD’s Most Decorated Detective and the Era That Created Him.” Jupiter, the company that produces “Street Justice,” took note.

The series uses a combination of archival footage and re-creations to trace some of the more dramatic moments of Friedman’s career. In the premiere episode, for example, a young Friedman is working the precinct desk when a detective upstairs is shot and killed by a perp who grabbed the cop’s gun while being fingerprinted.

Friedman’s stories may seem like dramatic fiction, but not to anyone who lived in the area during that time. Sections of the Bronx more closely resembled Mosul than a part of the Big Apple with its vacant, burned-out buildings lining major thoroughfares.

It’s no surprise that his precinct, the notorious 41st, was known derisively as Fort Apache. It encompassed only about two square miles, but it was the scene of over 100 homicides annually during this period.

The Bronx is in the midst of a resurgence fueled in part by a continuing decline in crime that some, like Friedman, credit to aggressive police tactics that have lately fallen out of favor. New York City’s current mayor, Bill de Blasio, made reducing stop-and-frisk policing a key plank in his mayoral campaign. Before he took office, a U.S. District Court judge said the tactic could be unconstitutional, and the department worked to decrease the frequency with which stops were being used by police. In 2013, the same judge said that stop and frisk was racial profiling by another name.

Friedman, unsurprisingly, is not pleased with the changes.

“When I was on the job, they wanted you to be very proactive, go out and arrest bad guys and do your job,” he said. “Today it’s not like that with this mayor. Police are more reactive, after a crime has been committed. They don’t want you out there doing real police work. Today, no one has your back.

“When we went out and stopped a guy on a hunch and found a gun or drugs, it was considered a good arrest. Today you’re violating the guy’s rights. You’re being micromanaged and the public will suffer.”

Asked if he felt there was any truth to the accusations of racial profiling, Friedman was interrupted by the Discovery Channel public relations person person, who ordered “next question.”

But Friedman did not have to answer the query for a reporter to get a feeling for his views.

“I would love to be a cop today, but I don’t think my methods would blend in with today’s policing,” he said.

In the show and in an interview, Friedman comes across as a no-nonsense, unapologetic guy.

Asked what the public misunderstands about police work, Friedman said, “I don’t think they understand how dangerous even the menial jobs we do — breaking up a family dispute or pulling over a vehicle — can be. You don’t know who is in that car. Did he commit a murder or a robbery. Did they jump bail?”

But you don’t need to take Friedman’s word for it. One of the re-enactments on the six-episode series begins with what seems like a family dispute but ends in gunfire. Friedman and his partner, Kalman Ungar, walk into an apartment and a man jumps out of a hallway and starts to fire at them.

Ungar is hit five times but the shooter — who, according to the show’s version, had just beat up his girlfriend — seems unscathed, despite the number of shots aimed at him. With his revolver empty, he attacks Friedman. In hand-to-hand combat, Friedman uses the last bullet in his gun to shoot the criminal.

Fortunately, Ungar survived his wounds. The shooter did not. (A contemporaneous New York Times account of the same 1972 shooting says the shooter had reported a robbery, and had mistaken the plainclothes detectives for the thieves.)

Friedman says he never experienced anti-Semitism on the job.

Back in Friedman’s day, the department had a reputation for being an Irish stronghold. The NYPD is more diverse now, and that “is a good thing, without a doubt” he said. “It reflects the makeup of the city. Good cops come in all shapes, sizes and colors. It’s the person.”

Friedman’s hard-nosed attitude vanishes when he is asked which life he likes better.

“But that’s a different life that’s behind me,” he adds. “Now it’s nice to be recognized and meet people interested in my story.”