Argentina turns over tens of thousands of Holocaust documents to Israel 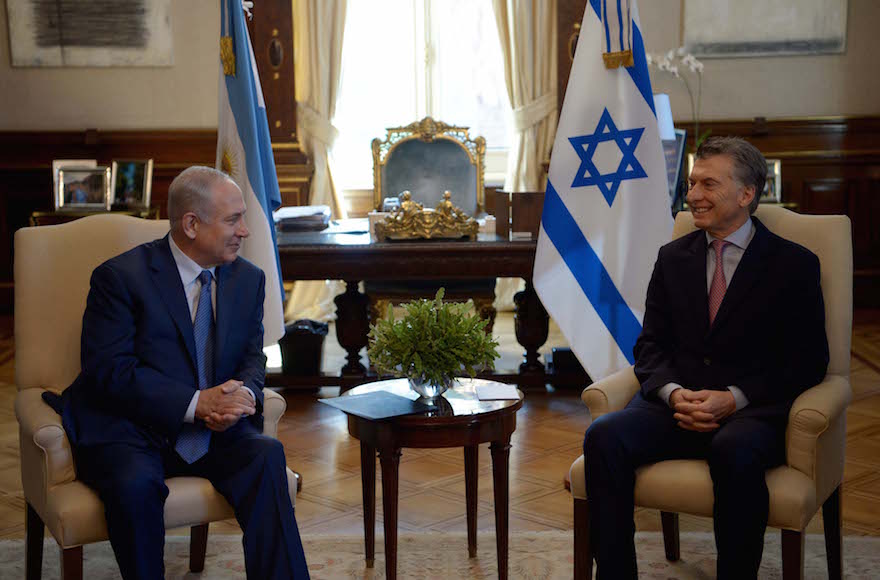 Digital copies of the documents — mainly letters, telegrams, newspaper articles, notes and reports — were delivered Tuesday in a box with five discs totaling 5 terabytes of information.

Argentina’s Ministry of Foreign Affairs produced the 139,544 documents mostly between 1939 and 1950.

“I gave to the prime minister an historic Argentinean documentation digitalized about the Holocaust for the use of the State of Israel to investigate and spread the information. This is very important for us,” Macri said at the presidential residence in Buenos Aires at the first-ever formal meeting between the leaders of both countries.

The documents will clarify the help that Argentina, which stayed neutral for much of World War II before joining the Allies, provided to Nazi criminals. The country was a postwar refuge for Nazis: Adolf Eichmann was captured in the northern area of Buenos Aires in 1960 and another Nazi war criminal, Erich Priebke, also lived there.

Claudio Avruj, Argentina’s secretary of human rights, told JTA that the documents “will help us to know the truth.” He said their delivery to Israel reaffirms the leadership that Argentina has regionally in Holocaust research.

Among the documents are the communications between Argentina and countries involved in the war —  — as well as information sent by the Argentine Embassy in Germany. Some documents also contain records related to the blacklist of Jews, among others.

Macri at the meeting with Netanyahu said Argentina will work “together with Israel and our allies against terrorism.” He also announced that Vice President Gabriela Michetti will visit Israel.

“It is not by chance that I start the first-ever visit of an Israeli prime minister to Latin America in Argentina. For sure the next visit will occur before another 70 years,” he said.

Netanyahu also spoke of Iranian terrorism and the nuclear threat.

“They have a terror machine that encompasses the entire world, operating terror cells in many continents, including in Latin America,” the Israeli leader said.

Addressing the world powers’ 2015 nuclear deal with Iran, he said, “I’ll be straightforward. This is a bad deal … either fix it or cancel it. That’s the Israeli position,” he said.

Next week, Netanyahu will meet President Donald Trump on the sidelines of the U.N. General Assembly in New York.

Netanyahu later in the day was to meet with President Horacio Cares of Paraguay. In the evening, he and the delegation of businesspeople who traveled with him will meet with Argentine government and business leaders to talk about economic ties and trade deals.