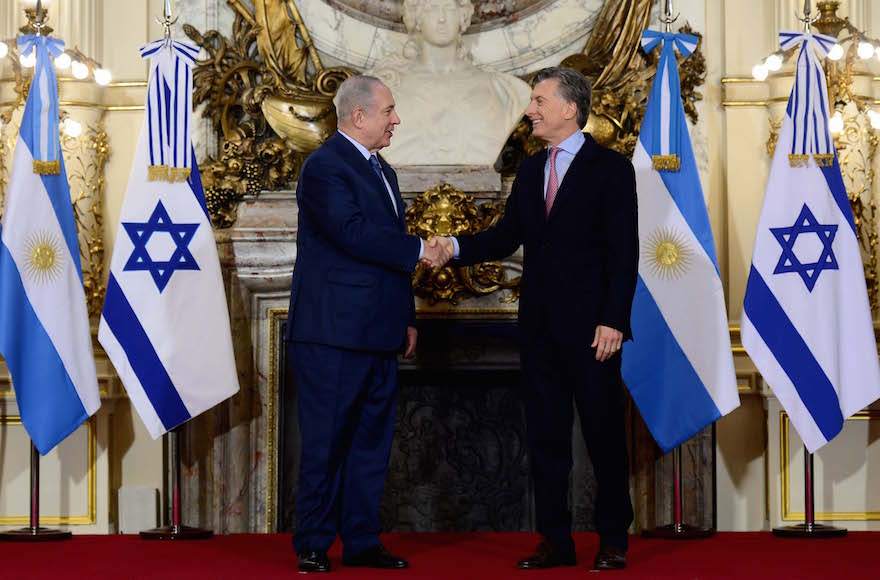 An hour after his arrival in the Argentine capital on Monday, Netanyahu visited the site of the Israeli Embassy attacked in 1992 to reaffirm the current friendship between the two countries and to denounce Iran. He later visited the AMIA Jewish community center, where 85 were killed in a 1994 bombing, and also stressed Israel’s bonds with the Jewish community of Argentina.

Iran is widely seen as being behind the two attacks, though no one has been brought to justice.

“We are determined to fight Iran’s terrorism, and we are determined to prevent it from establishing itself near our border,” Netanyahu said at the embassy. “It was Iran who in the 1990s was behind the major terrorist attacks in Buenos Aires. Iran’s terrorist octopus, from the Middle East, along with its proxy Hezbollah, continues to send arms to all parts of the world, and also to Latin America.”

Argentina’s vice president, Gabriela Michetti, and family members of three of the four Israeli diplomats who were among the 29 victims in the attack were on hand to hear Netanyahu at the embassy.

At AMIA, Netanyahu spoke in English to representatives of the United States invited by the center to commemorate the 9/11 attacks.

“We stand with you, we remember with you. We must fight terror together, always,” he said.

The day’s final event was a meeting at the Alvear Palace hotel with more than 600 members of the country’s Jewish community. AMIA President Agustin Zbar praised the “key moral leadership that Israel has in the world, fighting terror but under strict ethical rules.”

The second day of the visit is scheduled to be more focused on political and economic agreements.

Netanyahu, who arrived with 30 Israeli businesspeople, will meet Tuesday with Macri as well as President Horacio Cartes of Paraguay.

After his second day in Argentina, Netanyahu will travel north to Colombia for a few hours and then to Mexico to cap off his Latin American visit.

Argentina has a Jewish population of some 200,000, about two-thirds in Buenos Aires, making it the sixth largest among the world’s nations.