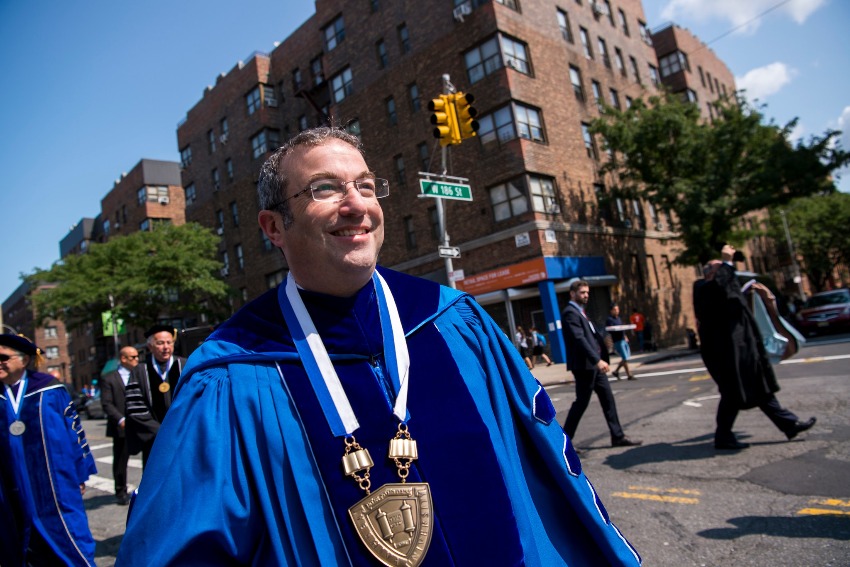 (JTA) — Rabbi Ari Berman, a graduate of Yeshiva University and its rabbinical seminary, was installed as its fifth president and said the school “is in my heart and it is in my soul.”

Berman, who succeeds Richard Joel in the post, outlined his vision for the future of the university, which is facing some major financial challenges.

“Most new presidents of universities need to learn the story of their institutions to understand their narrative and its purpose, but I do not need to read a history book to understand Yeshiva University — it is in my heart and it is in my soul,” Berman said. “In an era in which there is a breakdown of civic and civil conversation, Yeshiva University is uniquely positioned to address the most pressing moral issues of the day. Moving forward, we will continue to be steadfast in bringing to bear our vast, interdisciplinary resources on these fundamental issues both for the general public and also internally for our students. We stand proud as educators, thought leaders and moral voices for our generation.”

A special viewing event was held in Jerusalem, preceded by a lecture by Michael Oren, deputy minister of public policy in Israel, on the centrality of Israel to the Jewish people.

Berman served for 14 years as a rabbi at The Jewish Center, a prominent modern Orthodox congregation on the Upper West Side of Manhattan, until immigrating to Israel in 2008. He taught Talmud at Y.U. beginning in 1998.

During his time in Israel, Berman earned a doctorate in Jewish thought at the Hebrew University in Jerusalem. He served as rosh hamerkaz, or head of the center, at Hechal Shlomo, The Jewish Heritage Center in Jerusalem. He was also an instructor at Herzog College, a teachers’ college in the West Bank settlement of Alon Shvut, outside Jerusalem.

Berman will face several challenges in his new position. Y.U. lost money in the Bernard Madoff Ponzi scheme in 2008 and ran an operating deficit for seven straight years. Last year, it sold the Albert Einstein College of Medicine to the Montefiore Health System, losing half of its endowment in the arrangement. Y.U. also has been rocked in recent years by a series of accusations of physical and sexual abuse that took place at its affiliated boys’ high school in the 1970s and ’80s. The cases could not be prosecuted because they exceeded the statute of limitations.