This ex-Israeli soccer player is fighting two cancers, but still focused on helping others 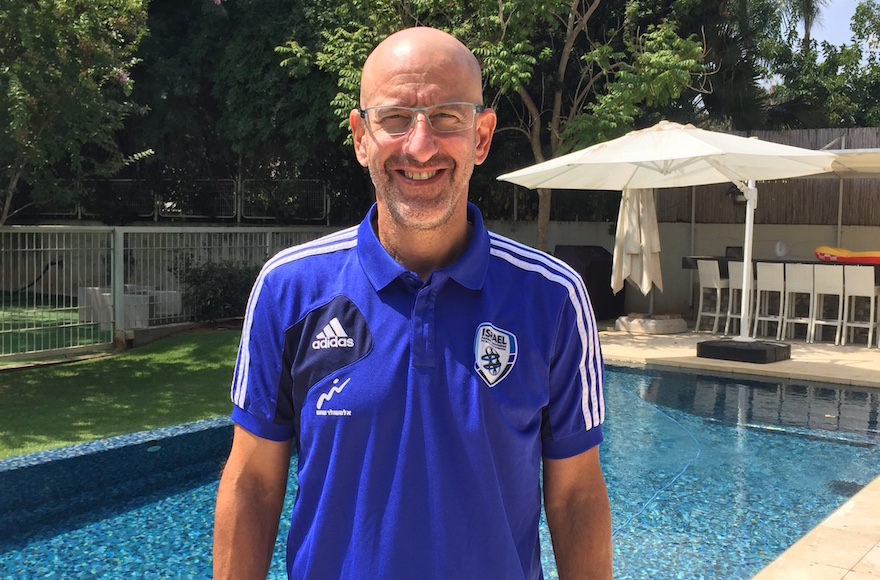 Tamir Gilat, a former soccer player turned entrepreneur, was given just months to live when he was first diagnosed with two kinds of cancer in early 2011. (Courtesy of Gilat)
Advertisement

SAVYON, Israel – When Tamir Gilat, a former goalkeeper for the Maccabi Tel Aviv soccer team, was diagnosed with two kinds of cancer in February 2011, his doctor advised him to put his affairs in order and cherish the remaining few months he had with his family.

“My youngest daughter was just 18 months old. It seemed unlikely I would see her go to kindergarten,” recalled Gilat, who had pancreatic and kidney cancer.

Nearly seven years later, Gilat has lived to see his two youngest daughters go to elementary school and his oldest daughter join the Israeli army. Despite continuing medical challenges, he lives an active life in this affluent Tel Aviv suburb thanks to a variety of cutting-edge therapies, some of them developed in Israel.

Once a busy lawyer and entrepreneur, Gilat now devotes most of his time to providing support to other cancer patients and raising money for cancer research.

He does all this while receiving cancer treatments every two weeks – and mourning the loss of his wife to cancer three months ago.

The problems started when Gilat, who was jet-setting around the world as a businessman working primarily in the energy sector, began to experience discomfort and then pain in his lower chest and upper abdomen. It took months to convince his doctor to order a CT scan.

Despite a terminal prognosis Gilat, then 48, decided to fight. Opting for aggressive treatment in the hopes of spending more time with his family, he first underwent extensive Whipple surgery, which removed parts of his pancreas and other internal organs, including his left kidney. Then he started chemotherapy.

“I was concerned about my wife, Keren, and my three daughters,” Gilat said. “Mia was 18 months old, Gabrielle was nearly 3 and Alma was 14. I knew that if I closed my eyes now my youngest children wouldn’t remember me. I decided I wouldn’t die until they had memories of me.”

Keren, a lawyer, took the news very hard, Gilat said. “She understood she would lose me.”

Less than three months after his big surgery, Gilat again felt “disharmony” in his body and sought out Dr. Talia Golan, an oncologist at the Sheba Medical Center. The pancreatic cancer had spread to his liver.

“She told me the chemo wasn’t working and that there were no traditional treatment options for me,” Gilat said.

But there was a clinical trial taking place at Sheba and MD Anderson Cancer Center in Texas. The trial’s goal was to extend, by a few months, the lives of patients with metastases who had a mutation of the BRCA gene – the same kind of mutation that raises the risk of breast and ovarian cancers. BRCA mutations are especially common among Ashkenazi Jews.

“I told my doctor I would be using this drug for many years to come,” Gilat recalled with a grin.

He started a targeted therapy treatment with a PARP inhibitor, which aims to prevent cancer cells from repairing their DNA. When the trial ended 15 months later, Gilat was the only patient still enrolled in the trial who was alive. He was allowed to continue the treatment for several years, until it stopped working about two years ago.

A team of doctors then placed him on an immunotherapy drug that wasn’t yet approved by the U.S. Food and Drug Administration. Gilat also asked to undergo another complex operation to remove as much of the cancer as possible — “even though surgery is almost unheard of in such systemic cancer cases.”

Part of Gilat’s reason for pushing the medical envelope again was a 2012 recurrence of Keren’s breast cancer, which had been in remission since 2004. A highly respected defense attorney in Tel Aviv, Keren Nahari Gilat died in June. 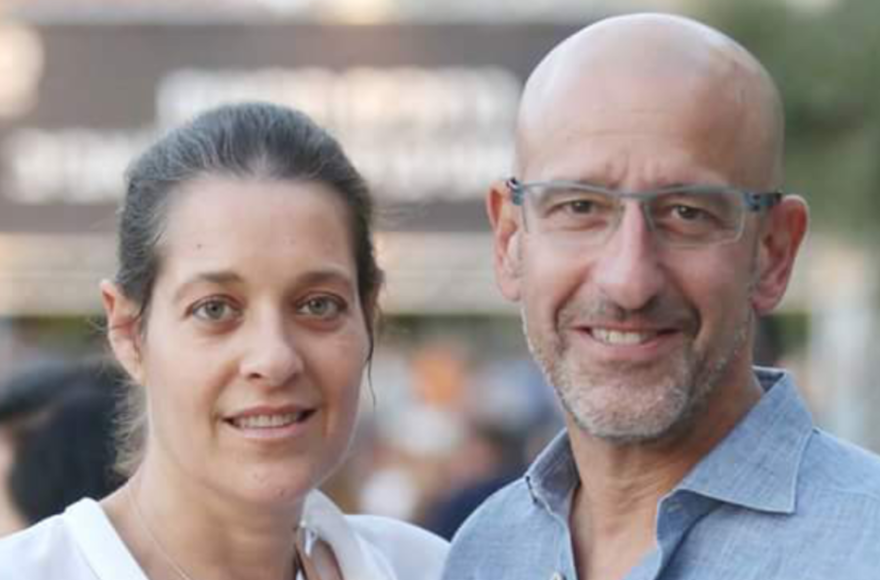 While fighting his own pancreatic and kidney cancer for more than six years, Gilat lost his wife, Keren, to breast cancer in June. (Courtesy of Gilat)

Gilat recalled how two years ago they were hospitalized in different hospitals. Keren’s doctors predicted she would live just 48 hours longer.

“Five days after my surgery I ran to be by her side. We were able to overcome this crisis, but her condition was very fragile,” Gilat said, his voice quiet. “Fortunately she was able to live another two years using every treatment possible on earth. I am thankful we gained some beautiful time together with the girls, who are now 8 and 9, and another daughter, 20, from my first marriage.”

Gilat’s life today is very different from the one he led before he fell ill. Once focused primarily on being a successful businessman, today his top priorities are his daughters and living with cancer. His treatment regimen includes taking more than two dozen pills every day.

“My life turned around 180 degrees,” said Gilat, now 55. “I had to stop working and am classified as 100 percent disabled. Today all I care about are my daughters and to do good for people.”

He devotes much of his time to his position as Israel chairman of the Israel Cancer Research Fund, which raises money – primarily in North America but now also in Israel — to fund cutting-edge Israeli science that is among the world’s most innovative cancer research. Since its inception in 1975, ICRF has given more than 2,400 grants totaling nearly $64 million to Israeli scientists and research facilities.

Gilat first learned about the ICRF in 2011 from his wife, who had attended one of the fund’s events around the time Gilat first became sick. Keren suggested they host a parlor meeting in their Savyon home, where the living room is filled with oil paintings and looks out onto a spacious garden and swimming pool.

When the fundraiser took place, Gilat was recovering from cancer-related surgery and was very weak. Keren asked him to address the guests, but he wasn’t sure what to say.

Then he thought about the work of Dr. Gal Merkel from Sheba Medical Center and Tel Aviv University, one of the scientists present that evening and a brilliant young cancer researcher involved in immunotherapy studies that served as the basis for Gilat’s own treatment years later. Gilat took out his box of immunotherapy pills and said, “This research is real, it’s not theoretical. Research saves lives. I am here today thanks to cancer research.”

This summer, the U.S.-based Cancer Research Institute — the world’s leading nonprofit dedicated to immunotherapy — announced it was teaming up with ICRF to jointly fund immunotherapy-related research in Israel. The goal of the partnership is to combine CRI’s immunological expertise with ICRF’s longstanding relationships with Israeli institutions to encourage and support the best immunotherapy research in Israel and push Israel’s best scientific minds to increase their focus on such research.

Eric Heffler, ICRF’s national executive director in New York, said Gilat’s determination to live and infectious optimism are great motivators for the organization and an inspiration to cancer patients.

“Tamir shows that if life kicks you, you kick back harder,” Heffler said. “At ICRF, we are inspired to raise more money for cancer research thanks to Tamir’s drive and determination.”

For his part, Gilat says that having cancer “has made me a better person. It showed me that my most precious possession is the time I have left.”