For many Israeli teens, the eve of Yom Kippur is a night of forbidden love 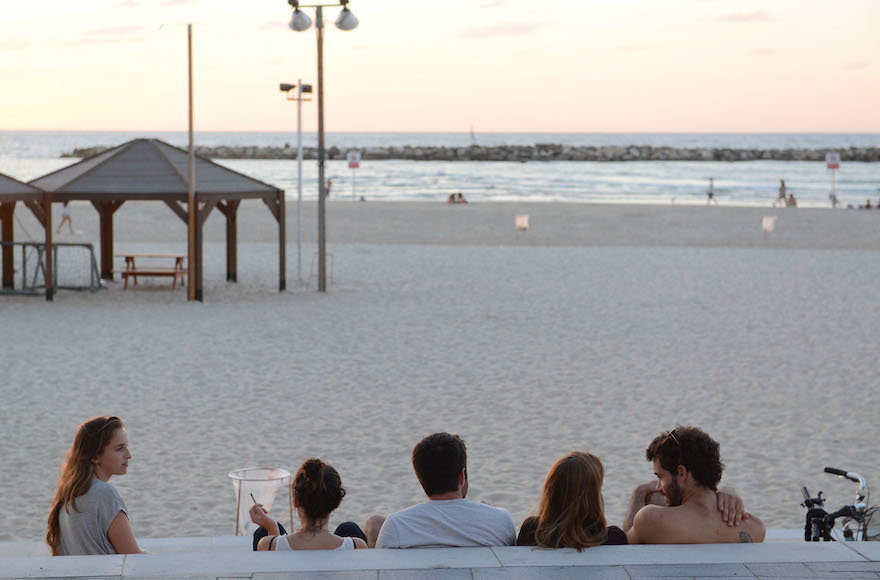 SHOHAM, Israel (JTA) — Ely Cohen topped off his all-white outfit with a few spritzes of cologne.

At sundown, the start of Yom Kippur, such anointments would no longer be kosher, and he wanted to be ready for the big night. He had just started dating a girl at his high school, and they had plans to meet up.

“We agreed to find each other in the roundabout, where everyone goes after synagogue,” he said.

As planned, the high school sweethearts — along with hundreds of their peers — met up in their town’s central traffic circle. But Cohen, 18, and Yuval Sadaka, 17, soon snuck into their high school gym for a make-out session.

That night turned out to be a turning point in their relationship, both Cohen and Sadaka said. A year later they are inseparable.

To most American Jews, the notion of kindling romance on the Day of Atonement is akin to mixing oil and water — you can, but you probably shouldn’t. But across Israel, it’s tradition for communities to gather on the streets after the Yom Kippur evening service, Kol Nidre. Israelis of all ages and stripes chat, enjoy the quiet of a night on which there is little or no traffic and, if they are young or single, flirt.

It is a custom especially beloved among Israeli teenagers. Despite Yom Kippur’s somber character — and the scriptural prohibition of sex during the 25-hour holiday — many look forward to Judaism’s holiest day as an opportunity for romance.

Like most of the country, Cohen’s hometown, Shoham, near Ben Gurion Airport, shuts down for Yom Kippur, when Jews traditionally fast and repent for their sins of the past year. Businesses shutter, the streets clear of cars, radio and TV cease broadcasts. Even many secular Jews, who constitute the majority in Shoham, as well as about 40 percent of all Israelis attend Kol Nidre services.

Afterward, people pour out of synagogue and into the empty streets. Keeping with tradition, many wear white from head to toe. Teenagers, mostly from Cohen’s secular high school but also from the Religious Zionist one, tend to stay out late, walking or biking around town. As a bonus, sleeping late the next day makes the fast easier.

In Shoham, the main meeting place is the aforementioned traffic circle. Hundreds of teenagers gather in a mass of white, with many sprawled out on pillows and blankets in the grass. Some play backgammon or board games. In public, hardly anyone violates the religious ban on eating or smoking; smartphones are left at home, or at least in a pocket. Public displays of affection are also generally avoided in keeping with the Talmudic prohibition against sexual relations.

Yet, according to Cohen — who is secular but observes many Yom Kippur customs — the holiday is known to launch plenty of relationships. After all, everyone is dressed up and on their best behavior. No adults are around, and there is nowhere else to be or anything better to do.

It is easy to strike up conversation with new people “about how hungry you are,” he said, laughing. 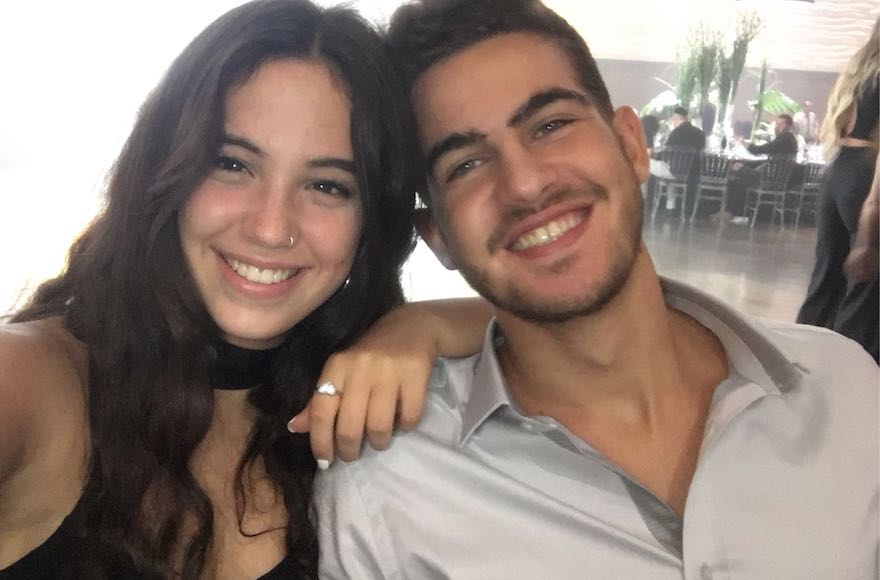 “Everybody is clean and dressed in white, and you’re supposed to have asked forgiveness for your sins,” Cohen added. “So there is this pure, magical feeling in the air.”

Sadaka had a simpler explanation: “Girls like Yom Kippur because the boys act nice for once,” she said.

And because romance is forbidden that day, it is more tempting than ever.

“You want to do it because you can’t do it,” Sadaka said. “Not even the bad breath you get from fasting can ruin it.”

Young love on Yom Kippur may not be a new development. In the Talmud, the first-century sage Rabbi Simeon Ben Gamliel recounted that in ancient times, the “daughters of Israel” would dance in the vineyard in white dresses on Yom Kippur, and the boys “who did not have a wife would turn to there to find one.” (Taanit 31a)

Gamliel also indicated the same ritual happened on Tu b’Av, a harvest festival now celebrated as a kind of Israeli Valentine’s Day. Of both holidays, he said, “There were no days as happy for the Jews.”

Ari Engelberg, an Israeli sociologist, said this description of Yom Kippur as a holiday of joy and courtship akin to Tu b’Av has long confounded rabbis since it flies in the face of contemporary understanding and observance.

“In rabbinic Judaism, Yom Kippur has become a very serene severe day of atonement on which everyone worries about their sins,” said Engelberg, who teaches sociology and Israel studies at the Rothberg International School at the Hebrew University of Jerusalem. “Rabbi Gamliel lived just after the Jewish Temple was destroyed and is recalling another tradition, perhaps within his memory. This has been a puzzle for generations of rabbis.” 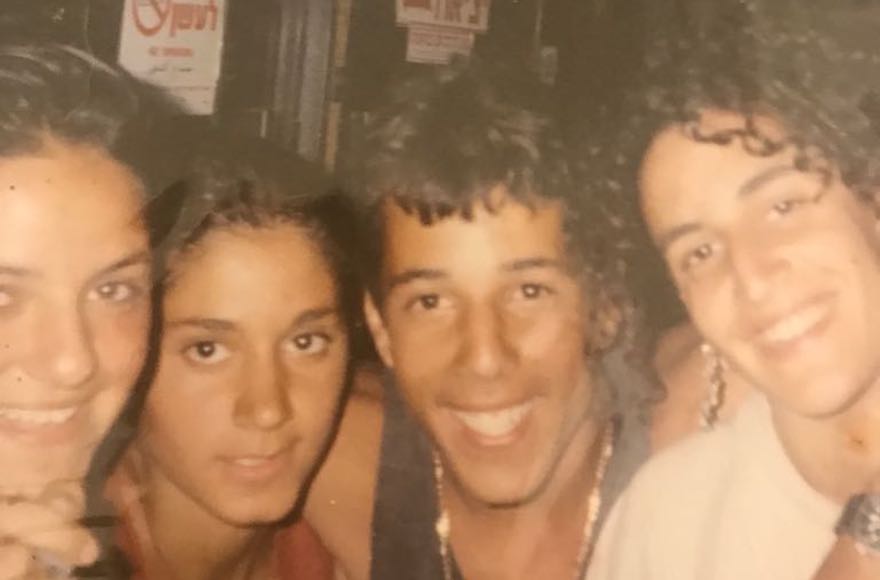 Eyal Turgeman posing with girls he met on a summer trip to Eilat, Israel, in 1991. (Courtesy of Turgeman)

Eyal Turgeman, a 43-year old who lives in Rishon Lezion, a city south of Tel Aviv, had a romantic encounter on Yom Kippur eve decades ago. The mechanical engineer looks back on it with mixed feelings today.

Turgeman grew up in Jerusalem in an Orthodox Jewish household that strictly observed Yom Kippur. His parents, Moroccan immigrants, taped the light switches, pre-cut the toilet paper (tearing and cutting are forbidden on Jewish holy days) and slept in separate beds to avoid even incidental contact. His father — like many strictly observant and almost all haredi Jews — spent most of the holiday in study or prayer.

But Turgeman and his friends, both Orthodox and secular, wandered the streets until the wee hours of the morning just like teens do today.

“Also back then it was a big opportunity to meet girls because it’s a big social thing at the center of town,” he said.

In his last year of high school, Turgeman spent Yom Kippur at his girlfriend’s house. Unbeknownst to his parents, they slept in the same bed.

“We started to touch each other, and one thing led to another,” he said. “We were up all night. Because it was not allowed, it was better than usual.”

In the morning, Turgeman had regrets. Soon thereafter, he and his girlfriend, his first love, broke up. Turgeman said he often blamed their Yom Kippur transgression.

“All the time it was in my head that it happened because of this, because I felt I did something that God saw me and punished us,” he said.

Although he is now secular, Turgeman said he still “feels a little bad” about that night and would not repeat it.

“What happened, happened,” he said. “But today I wouldn’t do that. It’s one day a year when you’re supposed to control yourself.”