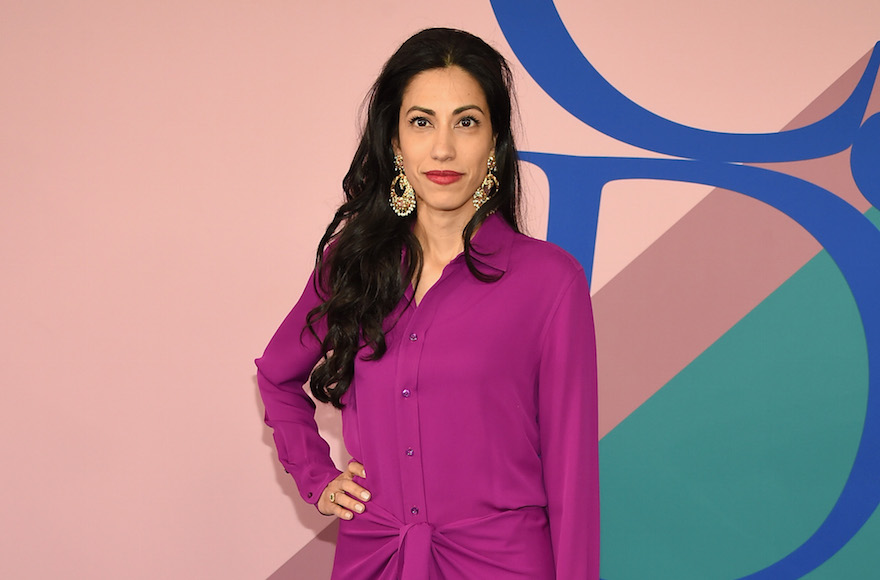 (JTA) — The estranged wife of disgraced ex-congressman Anthony Weiner pleaded with a federal court to show leniency when her husband is sentenced for sending sexual materials to a 15-year-old girl.

Huma Abedin, a former aide to Hillary Clinton during the 2016 presidential campaign, sent her plea last month to U.S. District Court Judge Denise Cote, the New York Post reported Thursday. She cited Weiner’s love for the couple’s 5-year-old son, Jordan, and the need to reduce any impact he may suffer from his father’s legal problems.

In May, Weiner pleaded to sending obscene material to a minor.

‘Whatever else Anthony has done, he loves” Jordan, Abedin wrote of Weiner, who is Jewish. The couple is divorcing.

Weiner, 52, will have to register as a sex offender where he works and lives.

He also has  asked the judge for leniency in a letter, saying he has gone to rehab, is in recovery and deeply regrets how his actions hurt the 15-year-old girl and his own family.

As part of his deal with federal authorities, Weiner’s attorneys said they would not appeal any prison sentence below the prosecution’s request of 21 to 27 months.

Abedin filed for divorce the same day her husband pleaded guilty, and the couple attended an initial hearing on Wednesday to ask the court to keep the details of their divorce private. Abedin is requesting full custody of the couple’s son.

The couple arrived at the divorce hearing separately but left together in the same car. They appeared to be on friendly terms while laughing and talking together in the courtroom.

Weiner was a rising politician from New York until he was forced to resign his seat in Congress in 2011 after it was revealed that he had been sending sexual messages and photos to numerous women, including a college student and a Las Vegas blackjack dealer.

He attempted a comeback in 2013 with a run for mayor in New York City. He was a front-runner to win the Democratic primary, but lost public support after news broke that he had been carrying on another sexting relationship, this time with a 23-year-old woman.

Abedin announced that she was separating from Weiner last summer after a woman came forward to say that Weiner had sent her a provocative photo of his crotch while he was lying in bed with his young son. The picture prompted New York child protective services to launch an investigation into Weiner, who was a full-time dad while Abedin followed Clinton on the presidential campaign trail.

A month later, news emerged of Weiner’s explicit messages to the 15-year-old girl.