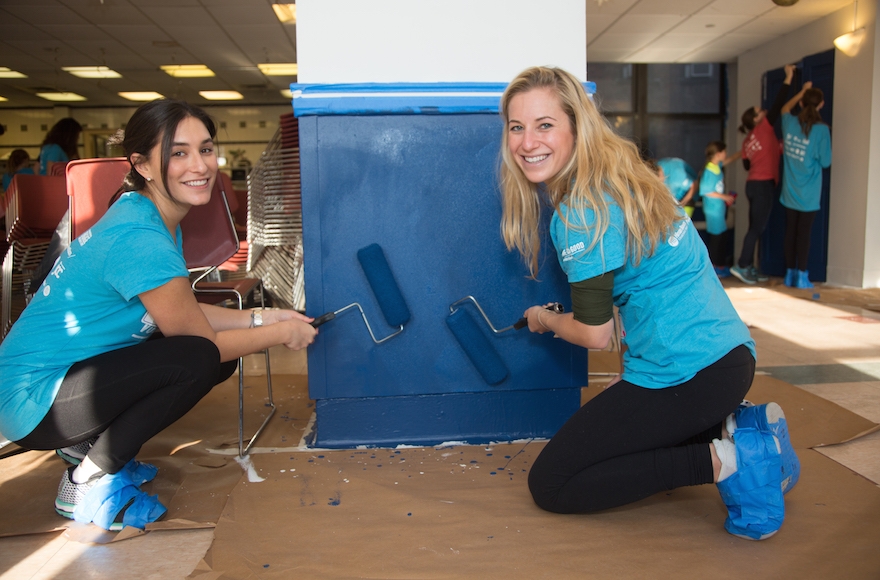 This story is sponsored by UJA-Federation of New York.

NEW YORK – When Jordana Levine, a teenager from Manhattan’s Upper West Side, decided to spend last Martin Luther King Jr. Day volunteering at a community center in central Harlem during a Jewish-organized service day, she was drawn by the idea of helping others.

But while spending her time off from school painting murals of sports figures at the center in the style of Andy Warhol, she realized something else.

Levine was one of approximately 2,400 volunteers who participated in the service day convened by UJA-Federation of New York’s Time for Good, the organization’s volunteer program.

Now the organization is gearing up for another volunteer day on Sept. 24 timed for the High Holidays. The day is part of a larger program dubbed 10 Days of Awesome — a play on the 10 Days of Awe between Rosh Hashanah and Yom Kippur, when Jews are meant to reflect upon their behavior and focus on doing good deeds.

Seizing the moment around the High Holidays, UJA said it is encouraging New Yorkers to volunteer and take action during a natural time when people are reflecting on changes they want for themselves and the world around them.

The volunteer day will take place on the Sunday after Rosh Hashanah. Participants, who can register online until Sept. 19 at www.timeforgood.org/days-of-awesome, can choose from six opportunities to volunteer in the New York area.

They are helping to refurbish a Brownsville, Brooklyn, public school in need of repairs; assisting in planting an urban garden at Bushwick City Farm in Brooklyn; sorting and packaging donations at a food bank in Hunts Point, in the Bronx; creating art with kids in the Riverdale section of the Bronx; participating in a “mitzvah day” event in Scarsdale, in Westchester County; and packing food for the needy in East Hills, on Long Island.

The volunteer opportunities range from two to four hours. UJA will provide free busing to various sites from central locations in Brooklyn and on the Upper East Side and Upper West Side.

The projects were organized with dual goals: to provide tangible, real relief and assistance and to do so through positive, hands-on experiences for the volunteers.

This is UJA’s third major day of service – and more are planned because of the overwhelmingly positive reaction, the organization said.

“New Yorkers are so busy juggling their lives. But we also have really huge hearts and a desire to help others,” said Sheryl Parker, director of Time For Good. “With Time For Good and this day of service, we are the connectors, making it easy to find a cause you’re interested in and fun people to do the work with.” 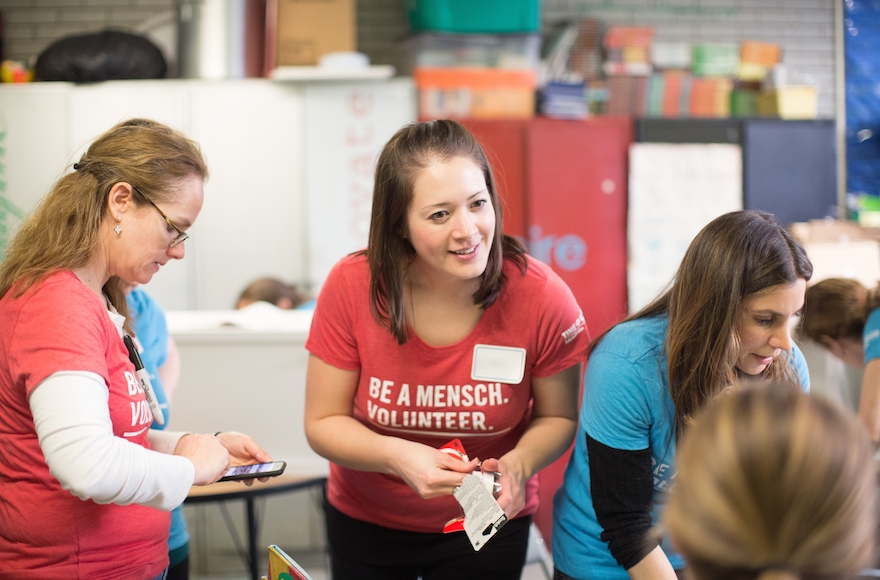 UJA said that the participating organizations were grateful that UJA offered to bring in “invested, energetic volunteers.” The Food Bank supplies 64 million free meals to New Yorkers in need each year and relies on volunteers to get all the food to the people who need it.

Volunteers sometimes have gotten more than they bargained for – coming in for a few hours of service but then becoming attached to the organizations and people they help, staffers said.

“Past days of service have been incredible to organize and execute, and it is astounding to see the connections that go beyond that first experience,” Parker said. “A volunteer who has never painted or worked with children before helps paint walls on a school and then returns again and again because they met so many incredible people and now feel compelled to come back and pitch in.

“These one-off volunteer days are critical to fix specific problems,  but also introduce volunteers to not-for-profits that they really connect with. So it’s a real win-win.”

In addition to the service day, the 10 Days of Awesome initiative includes a winter-coat drive for the needy and a media campaign to get New Yorkers to share their Jewish New Year’s resolutions publicly. The coat drive, organized in collaboration with New York Cares, includes drop-off locations at JCCs, synagogues and day schools across the city.

Those who wish to offer their own thoughts about doing good as part of the campaign can post at Jewish.nyc or on Facebook, Instagram or Twitter with the hashtag #10daysofawesome. The 10 Days of Awesome campaign is part of UJA-Federation’s 2017 centennial celebration.

(This article was sponsored by and produced in partnership with UJA-Federation of New York, which created the Time for Good volunteer platform for New Yorkers to channel their passion for volunteering and giving back. This article was produced by JTA’s native content team.)