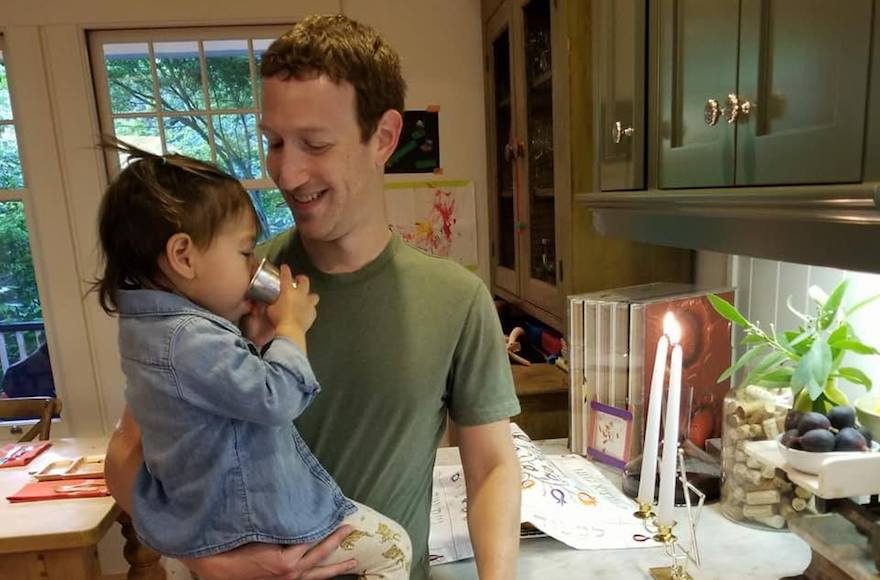 (JTA) — Amid criticism over Facebook allowing advertisers to target users based on anti-Semitic information, Mark Zuckerberg posted a photo on his social network of himself giving his baby daughter a kiddush cup that he said was a century-old family heirloom.

The Jewish Facebook co-founder and CEO posted a photo on his social network Friday of himself holding Max while she drank from the cup, which he said belonged to her great-great-grandfather, also named Max. Nearby is a marble kitchen counter topped with two lit Shabbat candles and challah under a white cover.

“For shabbat tonight, we gave Max a kiddush cup that has been in our family for almost 100 years. Her great-great-grandfather Max got it after our family immigrated here and it has been passed down through our family ever since,” Zuckerberg wrote in the post.

ProPublica, an investigative site, reported Thursday that Facebook’s advertisement algorithms generated categories including “Jew hater,” “How to burn jews,” and “History of ‘why jews ruin the world.’” The categories let advertisers target search users by what phrases they type into the query field.

Facebook removed the categories after being alerted to their existence and said it would seek to prevent such categories from popping up for potential advertisers.

Later in the day, Facebook said in a statement to JTA that it would remove “self-reported” categories — those generated by users, as opposed to those generated by the company — “until we have the right processes in place to help prevent this issue.”

Last fall, ProPublica reported that advertisers could use Facebook’s targeting to exclude certain races, or what the social network called “ethnic affinities,” from housing and employment ads, a potential violation of the Fair Housing Act of 1968 and the Civil Rights Act of 1964. Facebook, which assigns the updated term “multicultural affinity” to certain users based on their interests and activities on the site, no longer allows it to be used in ads for housing, employment or credit.

Also Friday, it was reported that both Google and Twitter similarly allowed the sale of ads tied to racist and bigoted keywords. Both companies apologized and said they had taken steps to fix the problem.

Max, whose full name is Maxima, is 2 years old. Her sister, August, was born last month.

In a Facebook post in December, Zuckerberg said he was once an atheist but now believes that “religion is very important.” The post came after he wished his followers a “Merry Christmas and Happy Hanukkah” on Dec. 25, 2016. Zuckerberg’s wife, Priscilla Chan, practices Buddhism.