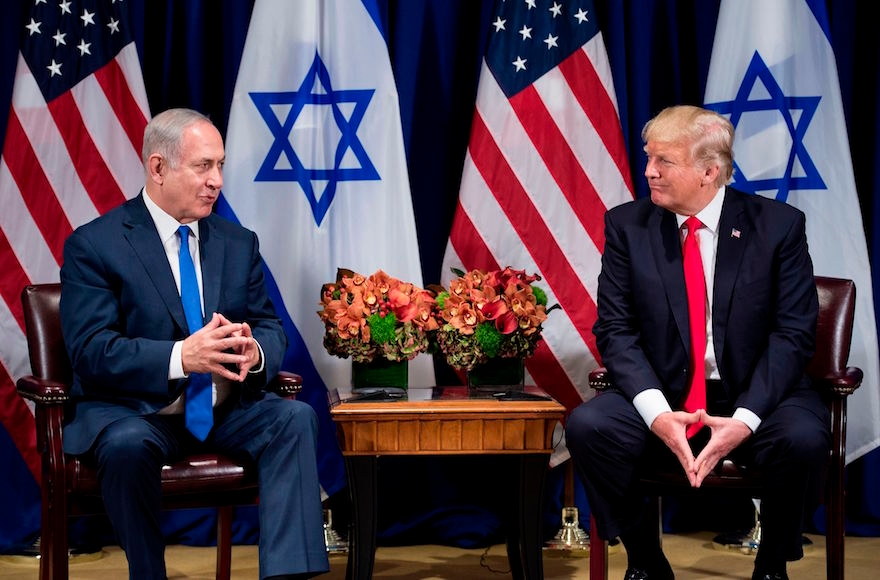 “I want to say that under President Trump, America’s position towards Israel at the U.N. has been unequivocal, it’s been strong, it’s got both clarity and conviction,” Netanyahu said Monday at a meeting with Trump in New York. “And I want to thank you on behalf of the people of Israel and Israel’s many friends around the world.”

Trump’s predecessor, Barack Obama, also routinely defended Israel at the United Nations, but at the end of his term infuriated the Netanyahu government by allowing through a Security Council resolution condemning Israeli settlements. Additionally, Trump’s envoy to the body, Nikki Haley, has been far more outspoken and public in her defenses of Israel than her predecessors.

Netanyahu also drew an implied and flattering comparison between Trump and Obama on the 2015 Iran nuclear deal.

“I look forward to discussing with you how we can address together what you rightly call is the terrible nuclear deal with Iran and how to roll back Iran’s growing aggression in the region, especially in Syria,” Netanyahu said.

The deal brokered by the Obama administration traded sanctions relief for a rollback in Iran’s nuclear program. Netanyahu reviles the deal and Trump has said he wants to amend or scrap it; the president has said to expect “dramatic” action by next month.

Trump in his remarks, unlike Netanyahu, emphasized his hopes for a brokered Israeli-Palestinian peace. Moreover, the U.S. leader said Palestinians and Israelis equally aspired to a deal — a posture Netanyahu has dismissed repeatedly, saying the Palestinians are not ready for peace.

Prior to the meeting, Trump had tweeted, “Looking forward to meeting with Prime Minister @Netanyahu shortly. Peace in the Middle East would be a truly great legacy for ALL people!”

Following the meeting, the White House, in a readout, said Netanyahu and Trump “stressed their goals of countering Iran’s malign influence in the region and resolving the Syria crisis in a manner consistent with American and Israeli security interests.

“They also discussed their continuing efforts to achieve an enduring Israeli-Palestinian peace agreement, the optimism in the region about peace, and expanding economic opportunities to improve conditions for peace,” the White House statement said.

On his Twitter feed, Greenblatt said he had “great” and “productive” meetings with Palestinian and Israeli delegations to the committee about spurring the Palestinian economy.

According to The Times of Israel, the Jewish leaders pressed Netanyahu on his reneging on a pledge to allow multidenominational prayer at the Western Wall. Also discussed, according to the report, was Iran and the civil war in Syria.

Jason Isaacson, the AJC director of international affairs, declined to comment on the range of topics discussed at the meeting, saying it was off the record. However, in a brief interview with JTA he described the meeting as “candid and positive.”