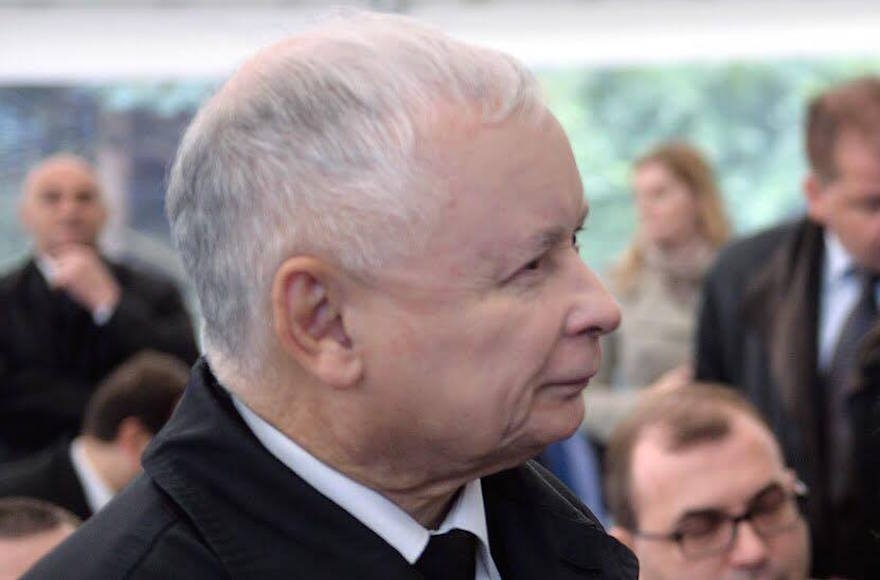 Jaroslaw Kaczynski at the "From The Depths Zabinski Awards" in Warsaw, Sept. 18, 2017. (Courtesy of From the Depths)
Advertisement

(JTA) — The person widely regarded as the most powerful politician in Poland called Israel a “great country” whose establishment is a “modern-day miracle.”

In a speech Monday, Jaroslaw Kaczynski, a founder of Poland’s nationalist Law and Justice Party, also condemned anti-Semitism and attempts to boycott the Jewish state.

Kaczynski spoke at an event organized by the From the Depths Holocaust commemoration group in honor of people who are believed to have helped Jews during the Holocaust.

In his address at the Warsaw Zoo, Kaczynski said that “the European left, but also other political forces, typically treats Israel with anti-Semitic” attitudes. He condemned anti-Semitism “in the strongest terms.”

Kaczynski’s remarks came as Jewish community leaders have disagreed among themselves over the degree of anti-Semitism in Poland and the role of the ruling Law and Justice Party. From the Depths has been one of the party’s strongest defenders.

Speaking after Yehiel Bar, the deputy speaker of the Israeli Knesset, Kaczynski revisited a remark that Bar made in his address calling Israel a “small country.”

“In its own way,” Kaczynski said, “Israel is not a small country but a great one” that needs to be viewed as a manifestation of a divine plan “without which Israel could not exist.” That it does exist “is a modern-day miracle,” he said.

At the event, From the Depths gave an award to Daniel Kawczynski, a British lawmaker, in honor of his great-uncle, his wife and their daughter whom Kawczynski said were killed by Germans for sheltering Jews. Because no witnesses corrobrated reports of their bravery, they have not been recognized as Righteous Among the Nations by the Yad Vashem Holocaust museum in Jerusalem, which pending rigorous historical research confers the title on non-Jews who risked their lives to save Jews during the Holocaust.

From the Depths founder Jonny Daniels gave Kawczynski an award created this year by a group named for Jan and Antonina Żabiński, who assisted and sheltered hundreds of Jews during the Holocaust as keepers at the zoo. Daniels said his organization vetted the veracity of the account of the Kawczynskis bravery.

Earlier this year, Leslaw Piszewski, the president of the Union of Jewish Communities in Poland, and Anna Chipczynska, head of the Warsaw community, sent a letter to Kaczynski saying that Polish Jews are increasingly fearful due to rising anti-Semitism and government inaction.

But other leaders of Jewish groups working in Poland, including Chabad Poland, From the Depths and the TSKZ cultural organization, dismissed this criticism as partisan – a claim rejected by Piszewski and Chipczynska.