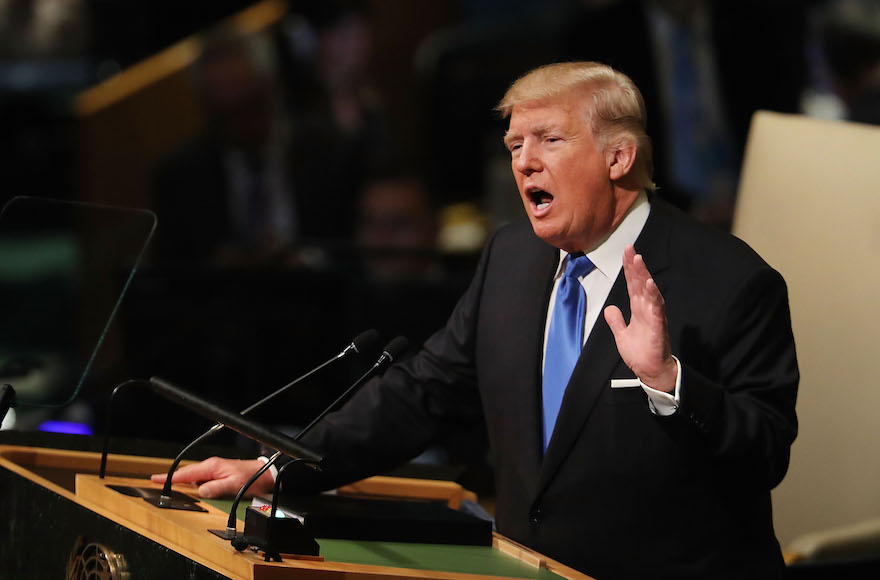 “We cannot abide by an agreement if it provides cover for an eventual nuclear program,” Trump said Tuesday on the first day of this year’s General Assembly in New York. Again calling the deal “one of the worst” he had ever encountered, the president said it was “an embarrassment to the United States and I don’t think you’ve heard the last of it, believe me.”

The 2015 deal, negotiated by the Obama administration, trades sanctions relief for a rollback of Iran’s nuclear program. Critics of the deal, including Israeli Prime Minister Benjamin Netanyahu — who, unusually for a leader, was in attendance during Trump’s speech — say the lifting of some restrictions on Iran’s nuclear program starting within a decade pave its path to a nuclear weapon. Defenders of the agreement say that other provisions written into the deal are sufficient to prevent Iran from getting a weapon.

Trump coupled Iran and North Korea as rogue regimes threatening stability worldwide. Several times he singled out Iran for its backing of the Hezbollah terrorist group in Lebanon and the threat posed by the group to Israel.

“In over 30 years in my experience with the U.N., I never heard a bolder or more courageous speech,” the Israeli leader said. “President Trump spoke the truth about the great dangers facing our world and issued a powerful call to confront them in order to ensure the future of humanity.”

In not mentioning his administration’s efforts to advance Israeli-Palestinian peace, Trump departed from his predecessors. Saying an Israeli-Palestinian deal is critical to world peace is almost de rigueur during the General Assembly, even for tiny far-flung nations that have no influence on the outcome.

Trump and Netanyahu met Monday, with the president saying that the two would be “discussing many things, among them peace between the Palestinians and Israel — it will be a fantastic achievement.”