Why Trump’s UN speech thrilled Netanyahu — for the moment, anyway 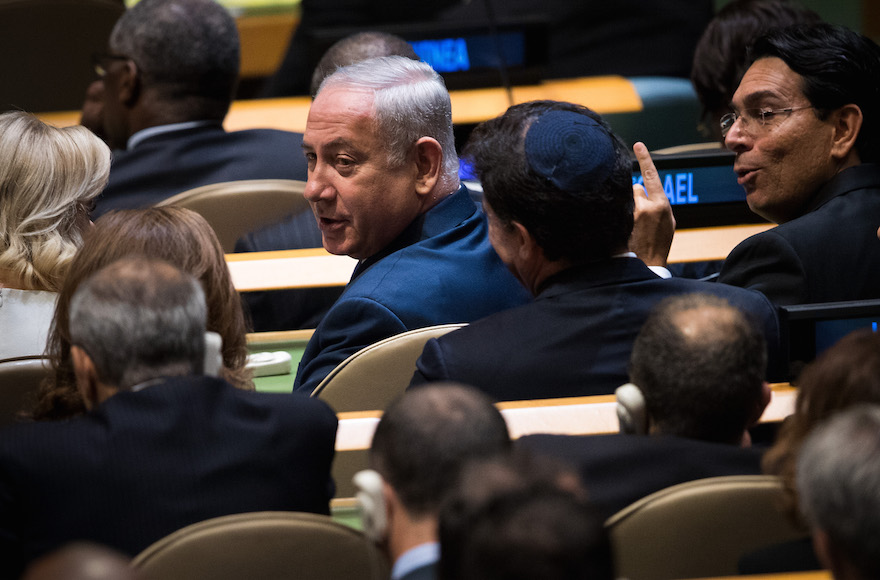 WASHINGTON (JTA) — The number of times President Donald Trump mentioned Iran or its derivatives in his U.N. speech?

Twelve, and each time to emphasize its threat.

The number of times he mentioned the Palestinians or derivatives? That would be zero.

“In over 30 years in my experience with the U.N., I never heard a bolder or more courageous speech,” Netanyahu tweeted immediately after the 40-minute address on Tuesday. “President Trump spoke the truth about the great dangers facing our world and issued a powerful call to confront them in order to ensure the future of humanity.”

Short term, Trump delivered big time on the Netanyahu wish list: He came closer to pledging to kill the Iran nuclear deal reviled by the Israeli leader and did not even mention peace with the Palestinians, which Netanyahu does not believe has traction at this point.

But wait, there’s more. Trump mentioned the word “sovereign” and its derivatives 21 times on Tuesday, the first day of this year’s General Assembly in New York.

Long term, Netanyahu and Israel may not be as enthused by Trump’s dream of a world in which nations make a priority of “sovereign” interests — or as the president put it, repeating a campaign phrase that unsettled many U.S. Jews, “America First.”

Trump’s overarching theme was a retreat from the robust interventionist role that to varying degrees has characterized U.S. foreign policy since the presidency of Franklin Roosevelt. Indeed, that undergirded the U.S.-led effort following World War II and its devastation to establish the United Nations.

“Our success depends on a coalition of strong and independent nations that embrace their sovereignty to promote security, prosperity and peace for themselves and for the world,” Trump said. “We do not expect diverse countries to share the same cultures, traditions or even systems of government.”

What that means practically is not clear, much like the rest of Trump’s foreign policy nine months into his presidency. But Israel’s security establishment has been wary of an American retreat from world affairs, especially when it comes to its war-torn neighbor Syria and the alliance between Syria’s Assad regime and Iran.

Trump’s emphasis on Syria — the thrust of much of his speech — was the routing of the Islamist terrorist threat embodied there by the Islamic State. Iran and its Lebanese proxy Hezbollah share that goal.

Secondarily, Trump said he would intervene when what he called the “criminal” Assad regime uses chemical weapons.

What Trump did not say — and what the Netanyahu government had demanded — was whether he would seek the removal from Syria of Iran and Hezbollah, which launched a war against Israel in 2006 and appears to be building a missile arsenal ahead of another war. (Trump did twice attack Hezbollah as a terrorist organization that threatens Israel.)

More broadly, Israeli Cabinet ministers — especially the defense minister, Avigdor Liberman — repeatedly expressed the concern that the Obama administration diminished the U.S. profile in the Middle East. Israel has long considered a robust U.S. profile in the region as key to its security.

On the Iran deal, Netanyahu could only be pleased at what he heard.

“We cannot abide by an agreement if it provides cover for an eventual nuclear program,” Trump said of the 2015 agreement, which trades sanctions relief for rollbacks in Iran’s nuclear program. Again calling the deal “one of the worst” he had ever encountered, the president said it was “an embarrassment to the United States and I don’t think you’ve heard the last of it, believe me.”

He lavished plenty of praise on Trump in his speech. Referring to Trump’s visit earlier this year to the Western Wall, Neyanyahu said, “When the president touched those ancient stones, he touched our hearts forever.”

The Israeli, who had a long meeting with Trump in the days before the General Assembly launched, suggested that his message was congruent with Trump’s.

“Today I will say things that the rulers of Iran and the people of Iran will remember always,” he said in Hebrew in a social media post two hours ahead of his speech. “I think they will also remember what President Trump says.”