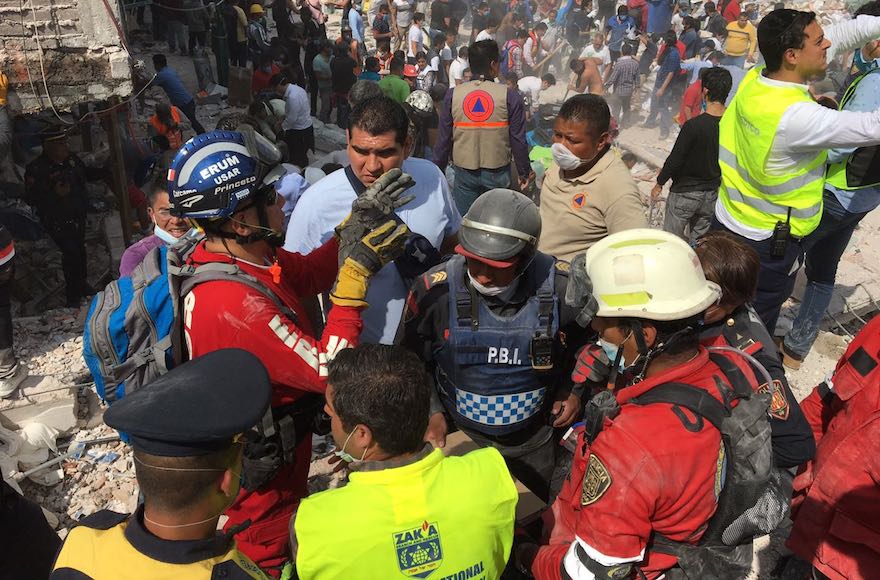 An Israeli rescue team working near the site of an earthquake south of Mexico City, Sept. 20, 2017. (Courtesy of ZAKA)
Advertisement

JERUSALEM (JTA) — Israel will send a search and rescue team to Mexico in the wake of a severe earthquake — the second to hit the North American nation in two weeks.

Prime Minister Benjamin Netanyahu ordered the operation and said it would leave for Mexico as soon as possible, his office said Wednesday morning in a statement.

More than 200 people have been killed in the 7.1-magnitude earthquake that struck central Mexico on Tuesday afternoon, rocking the capital of Mexico City and causing hundreds of buildings to collapse.

In addition, a delegation of 50 Israeli soldiers is scheduled to leave for Mexico City on Wednesday afternoon to assist in relief efforts.

Volunteers from Israel’s Zaka search-and-rescue organization arrived in Mexico in the hours following the quake and are helping local rescue forces, the organization said in a statement. In addition, engineers have been sent to local synagogues to make sure that they can safely accommodate Rosh Hashanah services, according to Zaka.

Tuesday’s quake comes two weeks after at least 96 people died in an 8.1 magnitude quake that struck off the southern Pacific coast of Mexico on Sept. 7. The Mexican states of Oaxaca and Chiapas were hardest hit.

The American Jewish Joint Distribution Committee is also responding, supporting the search, rescue and emergency aid efforts of CADENA, its Mexican Jewish humanitarian partner. The response focuses on immediate rescue and relief including digging people out of the rubble, emergency psychology services and medical aid, according to JDC.

The JDC has also opened a mailbox for donations.