Yom Kippur is a reminder of the awesome, and awful, power of words 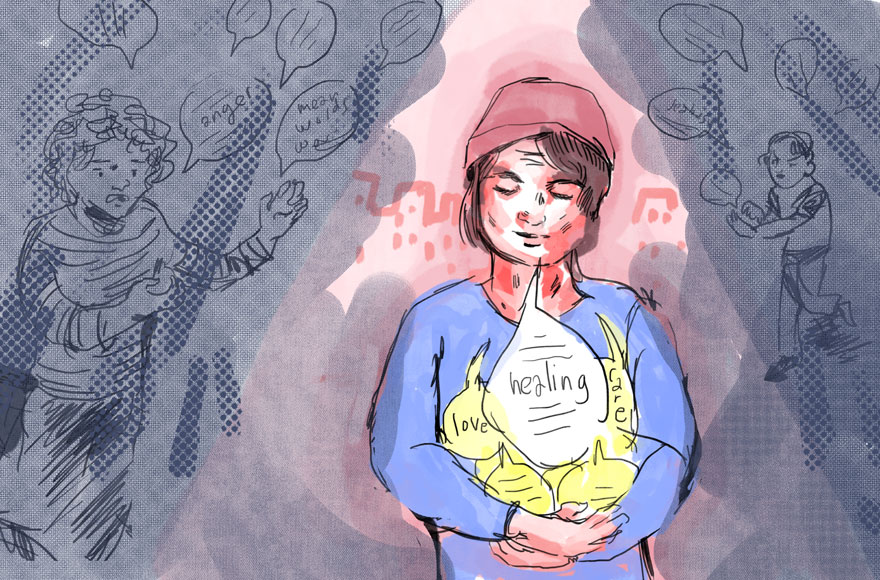 (JTA) — For nearly 50 years, my father had a best friend named Al. They grew up in the same neighborhood in Brooklyn, and after returning from the service in World War II, they each married and moved to the same Long Island town and opened related businesses.

They were closer than brothers. In fact, when my brother and I were growing up, our parents’ wills named Al and his wife, rather than any relatives, as the people who would become our guardians should that become necessary. Even after my parents moved to Nevada, the two couples remained close, speaking on the phone every week or so and visiting back and forth every couple of years.

Almost 40 years ago, Al’s daughter was getting married and my parents were planning to travel to New York for the wedding. One day, the two couples were on the phone talking about the wedding. My mother had recently undergone foot surgery and was walking around in ugly post-surgery shoes.

“I may have to wear blue jeans and sneakers, but we’ll be there,” she told Al’s wife.

The response: “But the wedding is formal!”

My mother was hurt. She thought the only proper response to her statement was, “We don’t care what you’re wearing, we just want you to be there.”

Al’s wife was hurt, too. She felt that my mother had to know how stressed she was trying to plan the perfect wedding and shouldn’t have teased her.

The phone calls became less frequent and my parents began saying that traveling to New York would be expensive and uncomfortable — and in early September it would be hot and humid. They decided not to attend the wedding.

Nine months later Al was dead of lung cancer and my father finally flew to New York to be a pallbearer at the funeral.

Like many men of his generation, my father wasn’t one to talk about his feelings, but from the day Al died he insisted that when you were invited to a simcha you must go, no matter the circumstances. Still, it was too late to repair what had been broken.

All this hurt resulted because no one involved could take back a few unthinking words spoken in haste.

The power of words has a very real, almost physical presence on Yom Kippur. Look at the list of “al chets,” or confessions, that we recite again and again on this day. We confess our sins of using foul language, speaking falsehoods, idle chatter, slander, disrespecting our parents and teachers, and spreading gossip. On and on; perhaps half the sins we confess are sins of speech.

Why? Because, despite our communal confessions on Yom Kippur,  most of us are not thieves or doers of violence. We are not evil people, but sins of words are easy to commit. We do it every day. That’s why at the end of every Amidah we recite the prayer of Mar, son of Ravina, “My God, keep my tongue from evil, my lips from lies,” rather than praying “God, help me not to steal, help me not to murder.”

The truth is, you can never take back words, you can’t go back to the time before the words were spoken.

One year, as the High Holidays approached, the man realized that his nasty gossip was a terrible sin, so he went to the rabbi’s office to ask for forgiveness. The rabbi said, “Of course I’ll forgive you, but first you must do something for me. Go home, take your fattest pillow up to the roof, open it up, and shake it out.”

The man thought this was odd, but he did as he was asked. It was a windy day and the feathers from the pillow were blown in every direction. He returned to the rabbi and asked again for forgiveness.

The rabbi replied, “There’s one more thing. First you have to pick up all the feathers.”

Like feathers turned loose, words have a life of their own. You can’t take them back and pretend they were never said because words have power. “Taking back” only happens in children’s games.

You can’t forget, but you can forgive.

The Torah tells us that the first luhot, the tablets of the Ten Commandments that Moses shattered after the sin of the Golden Calf, were made by God. The second luhot, given after Moses persuaded God not to destroy the Israelites, were made by Moses. God said to Moses, “Carve out two stone tablets like the first ones.” The new ones would not be the same because the people’s sin could not be undone or forgotten, but God could forgive them.

Rabbinic tradition holds that the second tablets were given on Yom Kippur as a sign that God forgives and that people must forgive. Forgive doesn’t mean forget, but it is possible to gather the broken pieces and build a new relationship.

The rabbis teach that both the second set of tablets and the broken pieces of the first were placed together in the Holy Ark. Why? To teach us that just as the second  tablets could be broken as easily as the first,  relationships are fragile, so we must guard our tongues. Moreover, even if a break occurs, the relationship can be repaired. It won’t be exactly the same, but a break should not be permitted to last forever.

And most important, the time to do something about broken relationships is now and not next year or someday. Nothing is more precious than love and friendship. Because words have power, not only to hurt but to heal.