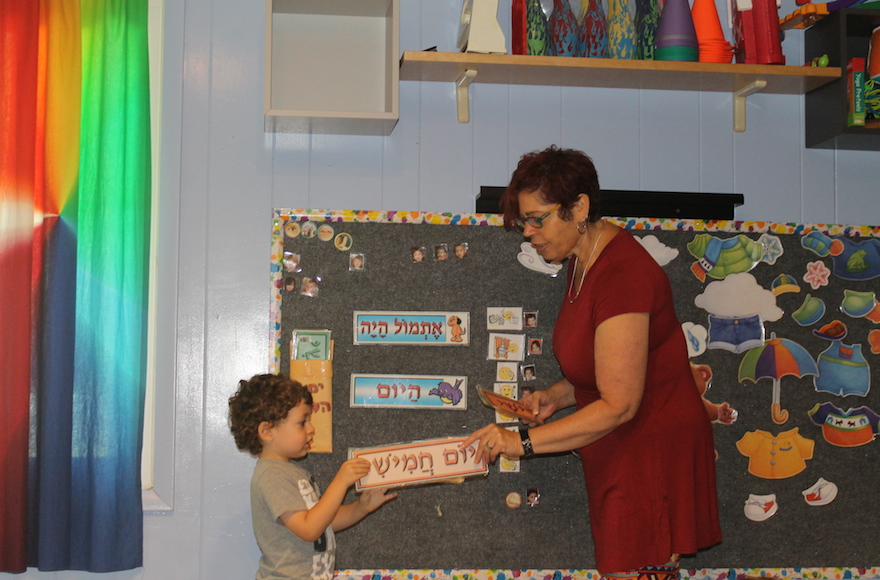 Tamar Pinto, who founded and runs Gan Gurim, teaching a student the Hebrew days of the week. (Ben Sales)
Advertisement

(JTA) – It’s the most picturesque of American scenes: a single-family home on a cul de sac in a suburb of the nation’s capital, a small American flag stuck in a wooden gate that leads to a backyard with a deck. An orange SUV is parked in the driveway.

But walk through the door and you may as well be in Tel Aviv.

A sign draped from the ceiling wishes all comers, in Hebrew letters, a “Shana Tova,” Hebrew for “Happy New Year.” In the corner is a map of Israel with Hebrew place names common in Israeli parlance that most American Jews would not recognize (Gush Dan, for example, Hebrew for the Tel Aviv metro area).

In the next room Tamar Pinto, the preschool’s founder and head teacher, welcomes each child into a circle through song, calling them by name and wishing them a good morning. Surrounding her are Hebrew kids’ CDs, Hebrew board games, Hebrew signs bearing days of the week, seasons, letters and numbers. Even the coffee on offer – instant with sugar and milk – recalls an Israeli teacher’s lounge.

Pinto runs what may be the only fully Hebrew preschool in the country, explicitly meant for children of Israelis in America. Another, in Los Angeles, is mostly conducted in Hebrew and run by another Israeli expatriate.

Jewish preschools across the U.S. integrate varying levels of Hebrew into the day, if only to teach holidays and prayers. But at Gan Gurim, though many of the children were born in the United States and may well live here for most of their lives, you’ll have trouble finding English – or American child-rearing norms – anywhere.

“Most of the parents want to talk to their kid in the language they feel most comfortable in,” Pinto said. “They want kids to talk to their relatives. Being Israeli is your identity, and the central piece of identity is language.”

Pinto grew up near the northern port city of Haifa, studied education and moved to Dallas in 1997 when her husband took a job there. She was hired by the local JCC to design a Hebrew preschool curriculum, and the family eventually landed in suburban Washington, D.C., where Pinto stayed home to raise the couple’s youngest child.

In 2003, an Israeli acquaintance heard about Pinto’s teaching background and hired Pinto to watch her child, too. By December, five other Israeli families had hired Pinto to take care of their children. When the families all asked Pinto to keep going for another year, she obtained a license to open a day care in her home. Since then, Gan Gurim has accepted 12 children a year. The current class ranges from ages 18 months to 4 years.

The area attracts many Israelis because it is home to the National Institutes of Health, which employ international post-doctoral students, and is also close to the Israeli Embassy in Washington, D.C. According to estimates, some 15,000 people in the area have lived in Israel. Some Israelis stay on a temporary visa and go back, while others bounce from job to job and remain stateside.

Both types send their kids to Gan Gurim: Those who plan to return and want their children to have an easier time reintegrating into Israeli schools, and those who expect to stay and have their kids keep up a connection to their birthplace – and grandparents.

Aside from the language, much of Gan Gurim’s programming would fit into an American Jewish preschool (for example, the Rosh Hashanah songs focused on apples and honey). 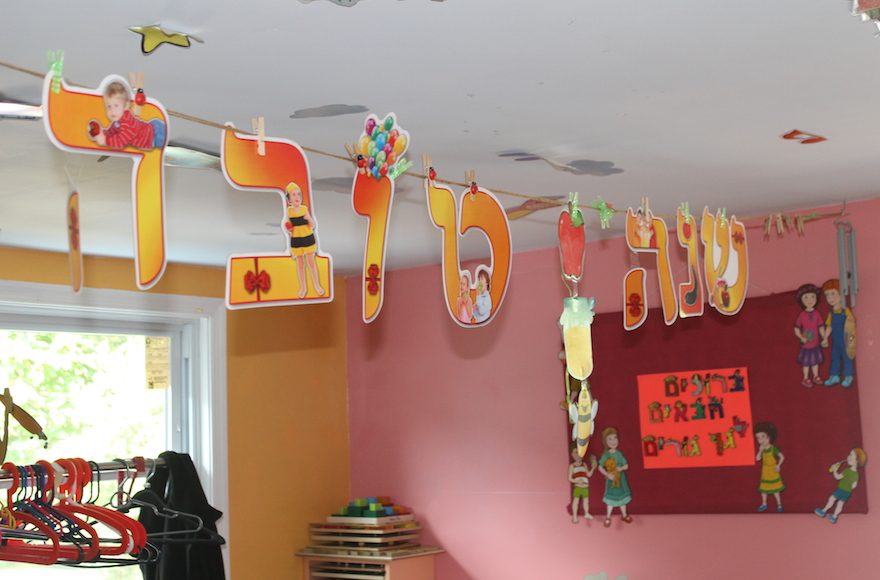 Letters in Hebrew hanging at the entrance to Gan Gurim spell out the greeting for a happy Jewish New Year. (Ben Sales)

“If it was just the Hebrew, maybe I would have given up on Hebrew,” said Itamar Simhon, an Israeli expatriate who has sent three kids to Gan Gurim. “But this preschool has everything. It teaches independence, confidence. She potty trains everybody. There’s no kid who comes out with a diaper.”

But much of its approach is uniquely Israeli. The Purim celebration emphasizes clowns — an Israeli staple on the holiday – and Pinto wasn’t even aware that the Hanukkah songs she taught were rarely sung in the U.S.

On Israel’s Independence Day, Pinto takes out a huge map of the country and points out where everyone’s family hails from. The kids bake pita bread on a traditional Druze oven (they’re kept far from the flame) and eat an Israeli salad with tahini sauce they mix themselves.

“The kids, they squeeze lemons, chop garlic, they do the whole process,” she said. “Kids need to learn through their senses, not by seeing me do something but in that they taste, touch, get dirty, listen – to really experience it.”

The Israeliness also shows up in daily activities. One recent morning, the kids all played on a playground and ran around a fenced-in yard – Pinto supervised from a distance and her adult daughter and assistant, Doron, kept a closer but still hands-off watch. Everything is up to code and safe, Pinto says, but the free-range Israeli style encourages independence, responsibility and problem solving.

The preschool’s embrace of Israeli pedagogy comes along with an eye roll at mainstays of American parenting. Pinto disdains time-outs – “It doesn’t have meaning” – and chafes at the constant American emphasis on sharing. It’s OK for kids to play exclusively with toys sometimes, she says, as long as they don’t monopolize them.

Free range is also the approach at Organi Day Care, the Israeli preschool in Los Angeles. Organi has a half-acre filled with animals, including a turkey, two dogs and a guinea pig. The school is taught in Hebrew save for a session in English in the afternoon so the children don’t fall behind their peers. On Israel’s Independence Day, they simulate a flight to Israel and dress like soldiers. On a normal day, the teacher, Ori Nottea, will let the kids run around.

“They can explore the sandbox looking for chickens, for guinea pigs, they can water the plants, they can play outside,” Nottea said. “I think the idea of nature and farming, there’s something Israeli in it.”

But the Israeli identity comes with its downsides. Although Pinto lives on the quietest of streets, she doesn’t put her address on her website and asked that her location – town included – be left out of this article. She is scared of being hit with a bomb threat or some other act of harassment, which is why she has kept the exterior of the home looking so generically suburban.

Being Israeli also means that Pinto’s class has a high turnover. Kids come into the school from an ocean away and can leave after a couple of years. Even Pinto’s own 23-year-old son has gone to Israel this year, to enlist in the Israeli army. The upside, Pinto says, is that while she may not be in Israel to care for him, her preschool alumni and their families are.