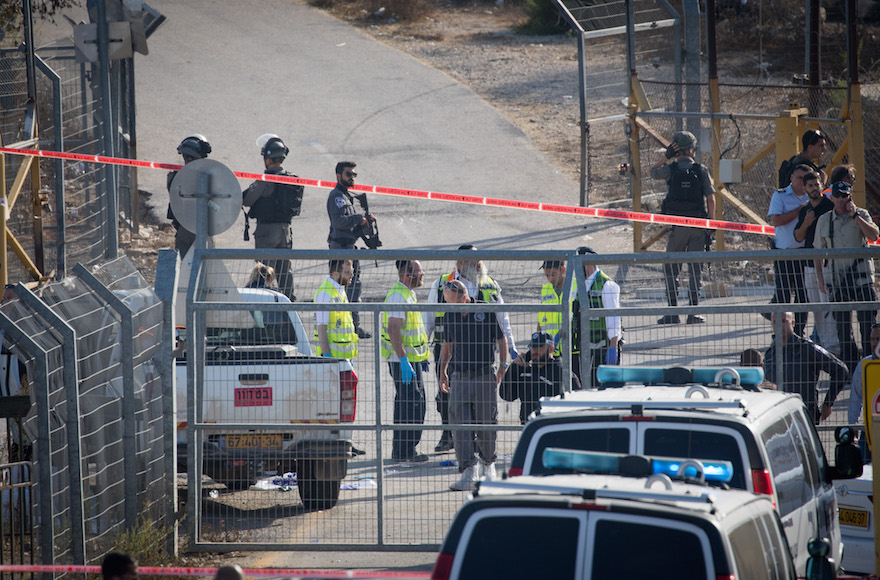 Israeli security at the scene where a Palestinian terrorist opened fire on israelis at the Har Adar settlement, outside of Jerusalem, Sept. 26, 2017. (Yonatan Sindel/Flash90)
Advertisement

JERUSALEM (JTA) — A Border Police officer and two Israeli security guards were killed and another man seriously injured in a terror attack at the entrance to a settlement near Jerusalem.

The shooting took place Tuesday morning as the security officers were opening the back entrance of the Har Adar settlement to Palestinian workers.

The gunman, identified by the Israel Security Agency, or Shin Bet, as Nimr Mahmoud Ahmed Jamal, 37, was shot and killed by security forces, Ynet reported.

Jamal, a father of four, had a permit to work in Har Adar. It is the second time since October 2015 that a Palestinian with an Israeli-issued work permit has committed a terrorist act.

According to the Israel Security Agency, Jamal has significant personal and family problems. His wife fled to Jordan several weeks ago, reportedly due to domestic violence, leaving him with their children.

At the start of a regularly scheduled Cabinet meeting that convened hours after the attack, Israeli Prime Minister Benjamin Netanyahu said the home of the terrorist would be demolished. He also announced that the all work permits for members of his extended family have been revoked.

“This murderous attack is the result of, among other things, systematic incitement by the Palestinian Authority and other elements, and I expect Abu Mazen to condemn it and not attempt to justify it,” Netanyahu said, using the nom de guerre of P.A. President Mahmoud Abbas.

The prime minister also expressed condolences to the families of the victims and wishes for the recovery of the injured security officer.

Jamal was from the neighboring village of Beit Surik, which was placed under closure after the attack.

The Fatah movement led by Abbas did not immediately comment on the attack. The terrorist Hamas movement praised the shooting, calling it “a new chapter in the Jerusalem Intifada, and is a confirmation from the uprising youth that the fighting will continue until the complete freedom of the people and the land.”

“Once again Jerusalem proves that it is at the heart of the conflict with the occupation, and that there is no way to get it out of the equation of the conflict,” the statement also said.

U.S. Ambassador to Israel David Friedman posted a statement on his Twitter account and in Hebrew on the Facebook page of the U.S. Embassy in Tel Aviv.

“Once again, Israelis confront the cruel and evil brutality of unprovoked terrorism,” he wrote. “We pray for the victims at Har Adar and their families.”

Once again, Israelis confront the cruel and evil brutality of unprovoked terrorism. We pray for the victims at Har Adar and their families.