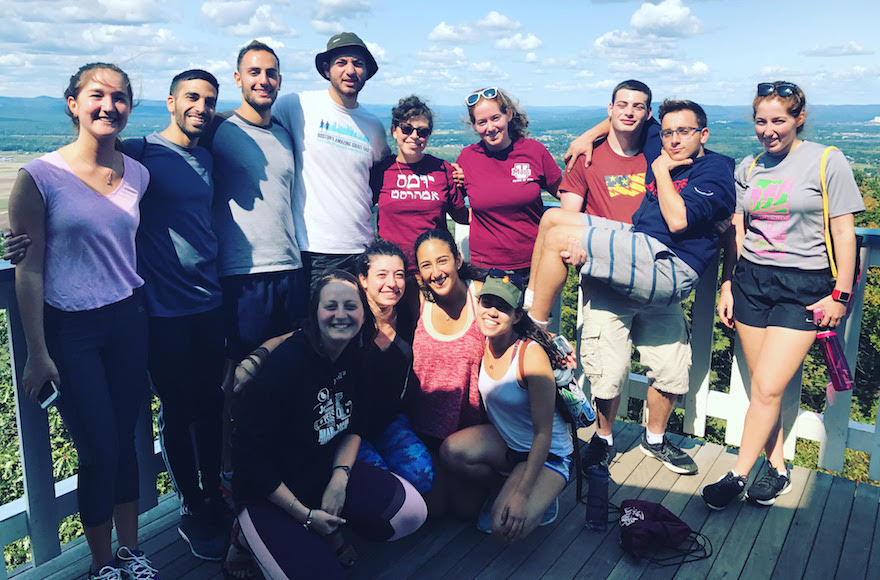 Ben Avrahami, second from left, standing, participating in a hike with other members of IAC Mishelanu at the University of Massachusetts. (Courtesy of IAC Mishelanu UMass Amherst)
Advertisement

(JTA) — Being involved with Jewish life was not a priority for Shai Ben David when she arrived at the University of Georgia. The 23-year-old, who moved to the United States from Israel at age 4, had few Jewish friends and was not interested in being involved in a religious community.

Besides, her science-heavy course load as a pre-veterinary student filled up most of her time.

“It really wasn’t a priority for me to try to be a part of the Jewish community here with Hillel,” she told JTA. “For me, being Israeli is more about the cultural part of being Israeli, not really the religious part.”

Yet Ben David now finds herself a leader of a campus group for Israeli Americans that she helped to found.

She is a fellow for IAC Mishelanu, an initiative that seeks to engage Israeli-American college students — Israelis who moved to the U.S. as well as the children and grandchildren of Israelis living here.

The program recognizes that Israelis in America have an identity distinct from their American-born peers.

IAC Mishelanu aims “to give Israeli-American students on campus a safe home where they are comfortable enough to speak in Hebrew and to share their hybrid identities,” said its program director, Tal Zmiri-Willner. “They’re all holding lots of identities: being Jewish, being Israeli, being American.”

The Los Angeles-based Israeli-American Council runs the program, which has 90 chapters nationwide and some 1,000 student participants. IAC Mishelanu was launched in 2011 by Israeli parents in the Silicon Valley looking to connect their kids with each other and form a community, and joined with the IAC as a larger nationwide campus initiative the following year.

Chapters are led by student fellows, who receive mentoring from regional managers and an $800 yearly stipend. They organize monthly social and cultural events, such as Israeli movie nights and Israeli-style Shabbat dinners, as well as approximately five larger events per year that showcase Israeli culture to the wider campus community. IAC Mishelanu also organizes a yearly conference and leadership retreats.

Most members are secular and not necessarily interested in the religious experiences traditionally offered on campus, Zmiri-Willner said.

“Hillel is considered to be more Jewish, and they are looking for the cultural side of being Israeli,” she said of IAC Mishelanu participants.

Most but not all IAC Mishelanu chapters operate under the Hillel umbrella.

Yoni Hirschberg, a 21-year-old film student who leads the IAC Mishelanu chapter at the University of Southern California, said Israeli-American students have a different identity than their Jewish-American peers.

“You’re not really Jewish American,” Hirschberg, who moved to the U.S. from Israel with his family at 3, told JTA. “You’re not not Jewish, and you’re also an American, you’re also Israeli. But you don’t really fit in because there are barriers of [being from] a different background, so there is a level of alienation.”

Ben Avrahami, a 25-year-old biology major at the University of Massachusetts Amherst, said he relates to the friends he made through IAC Mishelanu in unique ways.

“I feel very comfortable with them, they understand me in some aspects that other people don’t,” said Avrahami, who moved to America from Israel with his family at 12, later returning to the Jewish state to serve in the military before attending college.

“If you would step outside and look at it, it’s like another language,” he said. “I can’t even tell you exactly how it works.”

Ben David has seen her Hebrew improve significantly since being involved with IAC Mishelanu.

“My reading level was like that of a third-grader,” she said. “Even though I went to private [Jewish] school, I was very bad.”

She hopes to one day teach the language to her children. 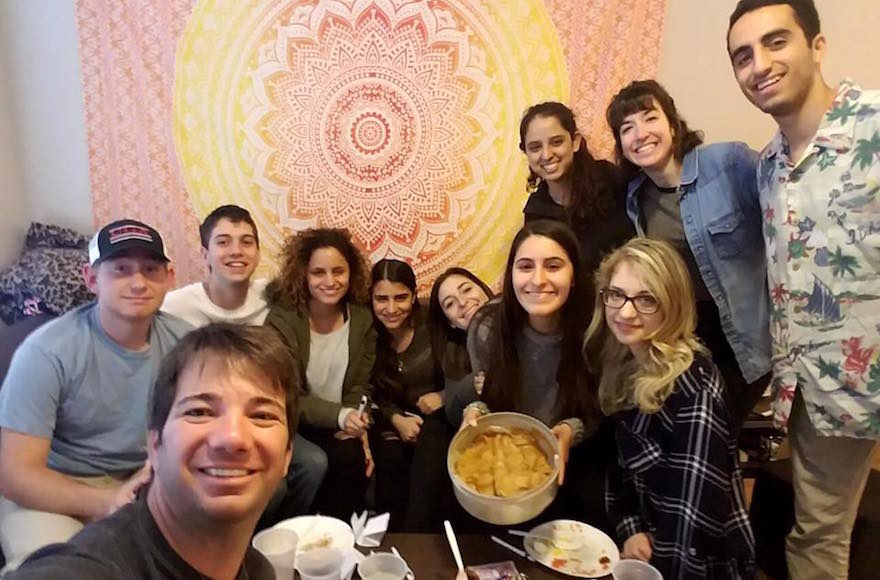 Lee Setty, in gray sweater holding the pot, and Shai ben David, in plaid shirt, with other IAC Mishelanu members at the University of Georgia. (Courtesy of IAC Mishelanu UGA)

IAC Mishelanu straddles the line between a cultural group and an advocacy group. Its website describes the group as “a pro-Israel campus program that fosters leaders and provides a home for Israeli-American students.”

Organizers, however, were careful to clarify that it is not political.

Zmiri-Willner said many students are not interested in a political group.

“We do find out that some of our students don’t want to see Mishelanu as an advocacy group, as a hasbara group,” she said, using the Hebrew term for Israel advocacy. “On many campuses there are many other organizations to do specifically hasbara. At our regular events they do not necessarily want to speak about hasbara. But they do [hasbara] in a very informal way when they speak about Israel with other students, when they share their own memories and their own feelings about Israel.”

Zmiri-Willner estimated that some 40 percent of IAC Mishelanu members are involved with Israel advocacy groups on campus.

The extent, if any, of a chapter’s political involvement varies.

Lee Setty, a 20-year old marketing major who is an IAC Mishelanu fellow at the University of Georgia, said her group is careful not to get too politically involved.

“Yes, students in our group are involved in Israel advocacy,” she said, “but where Mishelanu comes in is more cultural.”

Meanwhile Avrahami, who is a campus fellow for the pro-Israel group the David Project in addition to IAC Mishelanu, said he was considering planning a joint event for the two groups.

Political or not, IAC Mishelanu helps Israeli Americans connect with each other and non-Israeli Jews.

But participants also value the distinctions.

Ben David said being part of the group has contributed positively to her identity.

“It makes me feel proud to be Israeli American,” she said.