‘Settlements are part of Israel,’ US Ambassador David Friedman says 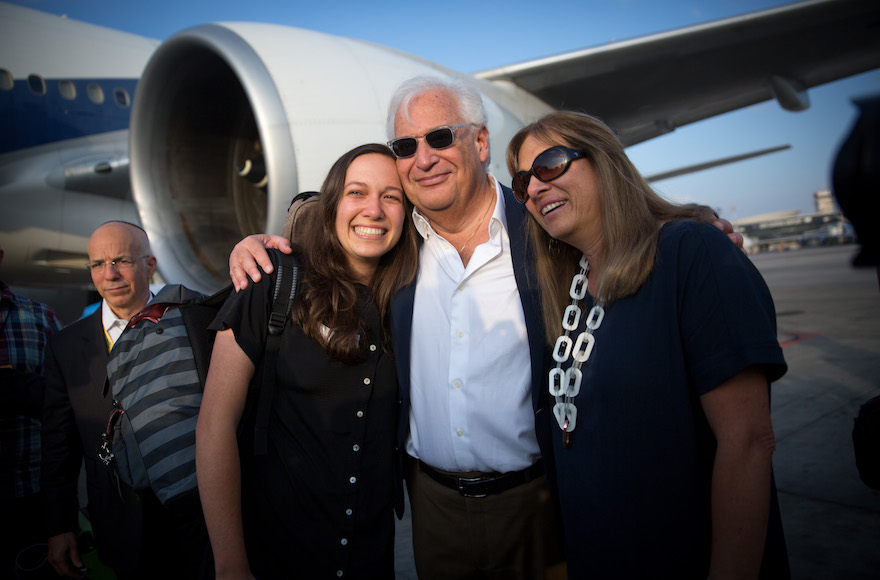 U.S. Ambassador to Israel David Friedman, with his wife, greeting his daughter and new Israeli immigrant Talia Friedman on her arrival at Ben Gurion Airport in Israel, Aug. 15, 2017. (Miriam Alster/Flash90)

JERUSALEM (JTA) — U.S. Ambassador to Israel David Friedman said a Trump administration-proposed peace plan likely will go public in months and that it was always understood that Israel would expand into the West Bank.

Israel’s Walla news website posted excerpts of an interview with Friedman on Thursday morning, and was scheduled to release the rest of the interview in the evening.

Friedman said a peace proposal was advancing in Washington.

In answer to a question about when a plan would go public, the ambassador said, “I would speculate within months, but we’re not holding ourselves to any hard deadline. We’ll try to get it done right, not done fast.”

Friedman, an Orthodox Jew who owns a home in Jerusalem, would not say whether the U.S. plan includes Israel giving up any settlements.

“I think the settlements are part of Israel,” he told Walla. “I think that was always the expectation when Resolution 242 was adopted in 1967. It remains today the only substantive resolution that was agreed to by everybody.”

Friedman was referring to the U.N. Security Council resolution passed following the Six-Day War that called for Israel to withdraw from the territories it occupied in 1967 in exchange for peace with its Arab neighbors.

“The idea was that Israel would be entitled to secure borders,” he said. “The existing borders, the 1967 borders, were viewed by everybody as not secure, so Israel would retain a meaningful portion of the West Bank, and it would return that which it didn’t need for peace and security.”

“So there was always supposed to be some notion of expansion into the West Bank, but not necessarily expansion into the entire West Bank. And I think that’s exactly what, you know, Israel has done. I mean, they’re only occupying 2 percent of the West Bank. There is important nationalistic, historical, religious significance to those settlements, and I think the settlers view themselves as Israelis and Israel views the settlers as Israelis.”

Friedman also told Walla that the concept of a two-state solution “has lost its meaning, or at least has a different meaning for different people.”