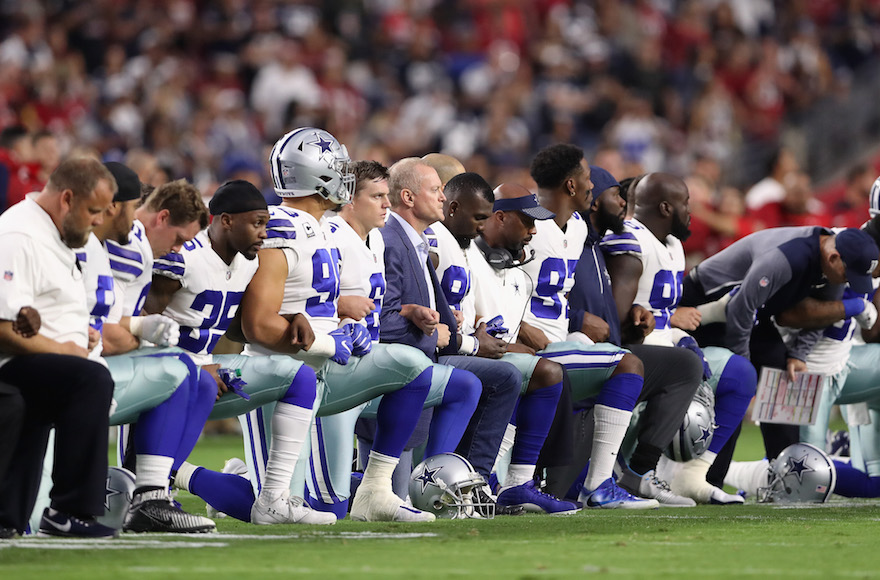 Members of the Dallas Cowboys linking arms before the national anthem at the start of their game against the Arizona Cardinals at the University of Phoenix Stadium in Glendale, Ariz., Sept. 25, 2017. (Christian Petersen/Getty Images)
Advertisement

(JTA) — The Anti-Defamation League will work with sports leaders and athletes to promote “positive social change” as the controversy over some NFL players not standing for the national anthem rages.

On Thursday, the ADL announced the formation of a Sports Leadership Council, which it said will “work directly with key leaders in the sports world, including professional athletes, team owners, and other industry leaders to increase the sports community’s efforts to build bridges of understanding, unity and respect.”

The 25 members of the council will be announced in November at the ADL’s annual meeting in San Francisco. Among the members already tapped are Robert Epstein, co-owner and managing partner of the NBA’s Boston Celtics, and Mark Wilf, the owner and president of the NFL’s Minnesota Vikings, as well as a board member of 70 Faces Media, JTA’s parent company.

“As we have seen with recent events, sports are intertwined with today’s biggest social issues,” Pac-12 Commissioner Larry Scott, who will chair the council, said in a statement. “Sports have a long history bringing about positive societal change, and we are excited to benefit from the expertise of a leading civil rights organization like ADL to help partner with the sports world to achieve meaningful progress.”

Scott is a member of ADL’s National Commission and past recipient of ADL’s Americanism Award for his commitment to social justice.

“This initiative follows a tradition at ADL of partnering with the sports community to combat hate, bullying and discrimination,” ADL CEO Jonathan Greenblatt said. “The sports industry has the remarkable power to break down barriers and bring about social change. We have an opportunity to promote fairness, equality, inclusion and mutual respect from the playing field to the classroom through our national network across the country.”

Professional football players have been under fire in recent weeks for kneeling during the national anthem as a protest against the treatment of blacks by police and other officials. President Donald Trump said last week that players who do not stand should be fired and used the epithet “son of a bitch” to describe them.