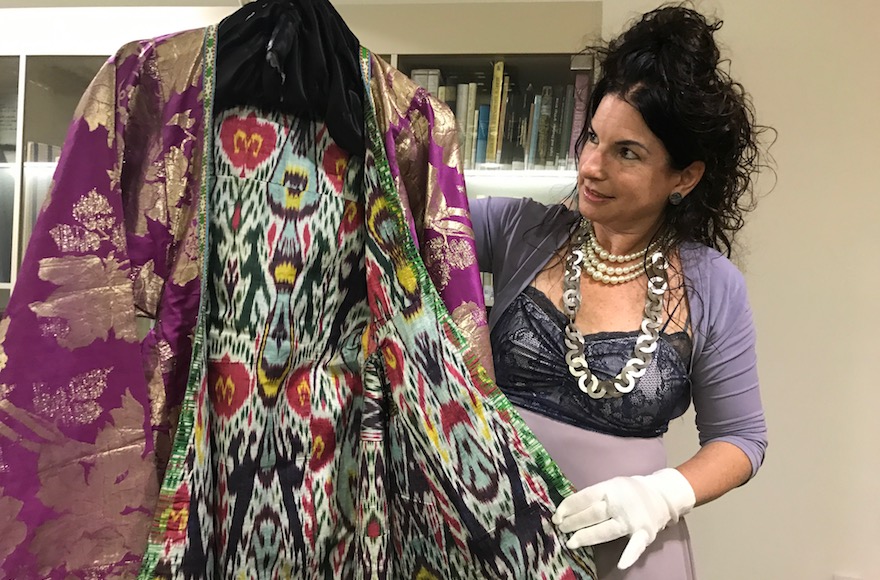 JERUSALEM (JTA) — When the Israel Museum put a burka-style garment on display in an exhibition on Jewish clothing, some visitors were confused: What does a full-body cloak associated with Islam have to do with Jewish fashions?

A lot, it turns out.

“This was actually traditional clothing for high-society Jewish women until even the mid-20th century,” Efrat Assaf-Shapira, a curator of the museum’s vast collection of Jewish costumes, told JTA. “Jews around the world mainly wore whatever their surrounding societies wore.”

So, for example, white silk Tunisian wedding pants with a 10-foot waist to accommodate pleasingly plump brides, a purple silk Iranian skirt inspired by the tutus of the Parisian ballet and a white cotton Ethiopian dress and belt are part of the museum’s collection of Jewish clothing.

Now the Israel Museum is preparing to bring its cosmopolitan Jewish fashions to New York for the first “comprehensive U.S. exhibition” of Jewish costumes. “Veiled Meaning: Fashioning Jewish Dress,” will be on display at the Jewish Museum in Manhattan from Nov. 3 to March 18. 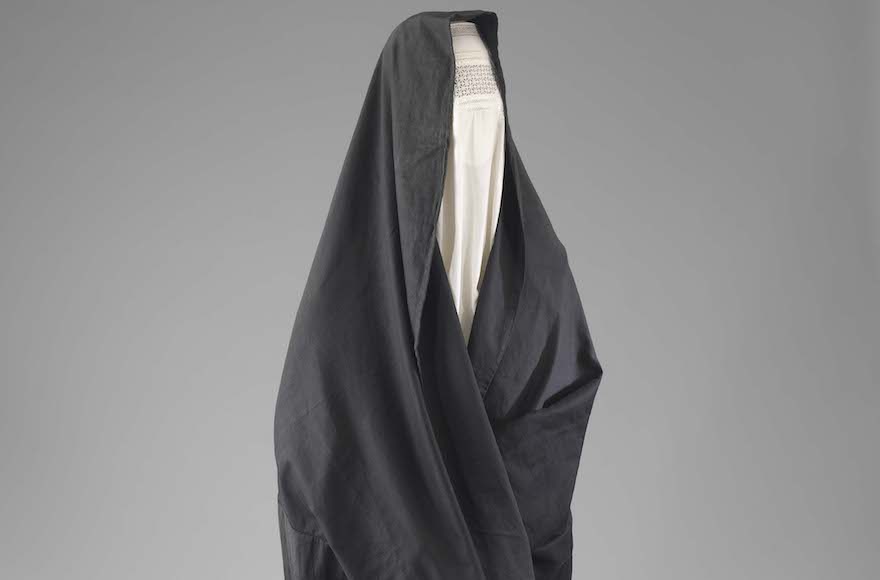 A chador worn by Jewish women in Herat, Afghanistan. (Courtesy of the Israel Museum/Mauro Magliani)

Since its opening in 1965, the Israel Museum has accumulated the largest collection of Jewish dress in the world. The climate-controlled basement of its sprawling campus in downtown Jerusalem houses some 10,000 items worn by Jews in dozens of countries over the past few hundred years.

The museum’s collection is the result of Israel’s unique role as a refuge for world Jewry: Most of the items were donated by the immigrants who rushed to the country by the millions after its founding in 1948.

“The large scope of this collection is only possible because all the communities from around the world came to Israel,” Assaf-Shapira said. “It’s a rare meeting of cultures that happened at the edge of modernization.”

Still, the collection is inevitably limited by the forces of history. According to Assaf-Shapira, Jews already were beginning to trade their traditional clothing for Western-style garb when they began immigrating to Israel, and this was especially true of men. Also, because of the Holocaust, European Jews brought very little of their culture with them, with the partial exception of those from the south of the continent.

Iranian Jews wore a tutu-inspired skirt and jacket in the early 20th century. (Courtesy of the Israel Museum/Mauro Magliani)

As a result, the clothing preserved by the Israel Museum largely represents the styles worn by Jewish women in North Africa, Yemen and Asia during the late 19th and early 20th centuries. Most of the items are the kind of ceremonial garb that such women packed away in their closets as heirlooms, especially wedding dresses.

Over the decades, the Israel Museum has displayed its clothing collection in a series of exhibitions focused on Jews from specific regions. In 2014, for the first time, it showcased global Jewish fashion under the title “Dress Codes: Revealing the Jewish Wardrobe.”

“Veiled Meaning” at the New York museum will be a version of that exhibition, including about 100 items from dozens of Jewish communities as far flung as Italy and India.

Assaf-Shapira said the sheer variety of the materials, colors and designs challenge the notion that Jews preserved their identity by rejecting outside influences. In most cases, she said, Jews dressed in the style of the surrounding society.

A bridal outfit worn by Tunisian Jews in the early 20th century. (Courtesy of the Israel Museum/Mauro Magliani)

“There is shared core of the religion and the ceremonies,” she said of these Jewish communities. “But surrounding this shared core, there is a whole area of traditions which were shared with Muslims and Christians.”

In some cases, Jews even contributed to popular fashion, she said, citing a Bukharan woman’s coat lined with colorful ikat weaving at which local Jews were skilled.

Even when Jews did wear distinguishing clothing, Assaf-Shapira said, they were typically preserving and appropriating outmoded local fashions, not uniquely Jewish ones. 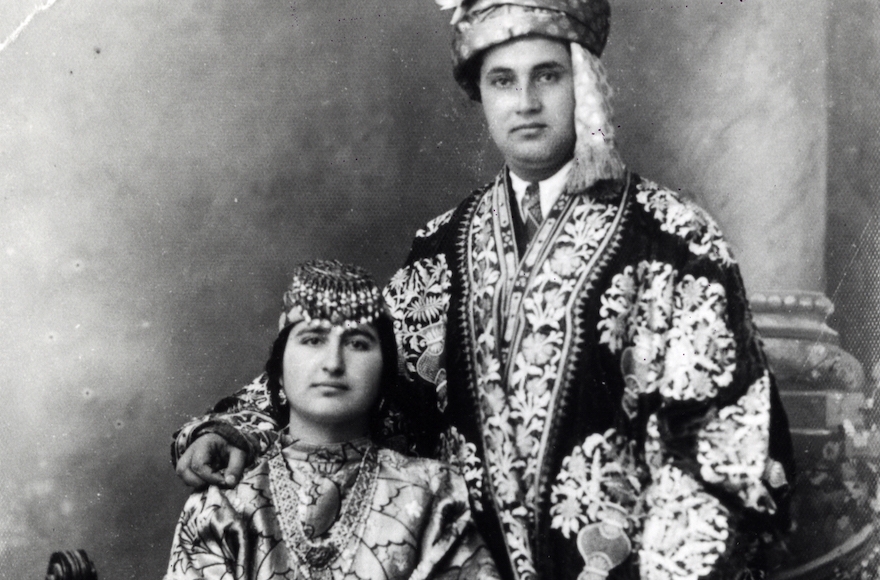 Which brings us to the burka-like veiled garment that confounded visitors to the Israel Museum and will be on display in New York.

In Mashhad, Iran, Jewish women wore the chador along with a veil — just like their Muslim neighbors. After they fled persecution and forced conversion in the 19th century and resettled in Herat, Afghanistan, they preserved their Iranian-style shawl rather than adopt the local burka like their Jewish contemporaries in nearby Kabul. Many continued to wear the chador until they immigrated to Israel, as late as the 1970s.

“These items going to New York tell the story of the diversity of the Jewish communities all around the world,” Assaf-Shapira said, “and actually how you keep your identity through changing times.”