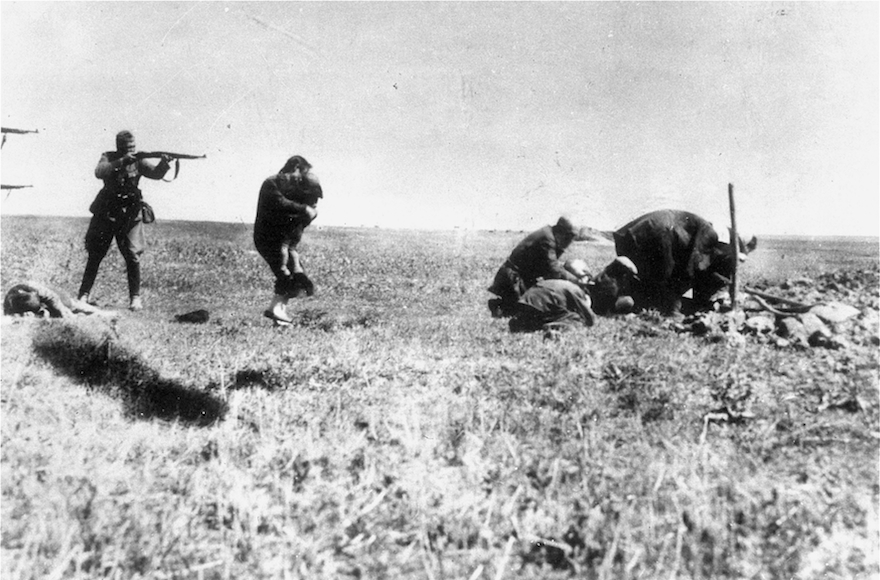 Efraim Zuroff of the Simon Wiesenthal Center in Jerusalem went public with the names after German state investigators appeared to be dragging their feet, he said in an interview.

The program by the ARD broadcaster featuring comments from Kurt Gosdek and Herbert Wahler was to air Thursday on the “Kontakt” newsmagazine. They are alleged to be members of Einsatzgruppen, or mobile death squads, which historians say were responsible for about 2 million murders in the Soviet lands under German occupation.

Zuroff told JTA that in 2014, he supplied German investigators with a list of 80 names of Einsatzgruppen members — 76 men and four women — born in 1920 or later that he had researched himself. He said he became frustrated with the lack of response from the Central Office for the Investigation of National Socialist Crimes in Ludwigsburg and decided to work with a reputable German broadcaster.

The prosecution of such perpetrators became easier following the 2011 conviction of John Demjanjuk in Munich, which set a precedent enabling accessories to Nazi genocide to be tried for murder.

When Ludwigsburg investigators failed to act, though they had asked Zuroff for his list, the Nazi hunter searched on his own for those who were still alive. From there, ARD managed to get interviews with two of them.

Zuroff said it was “one of the greatest moments of my life” when ARD told him about the interviews. According to a transcript he has seen, one of the men said he was working for the Einsatzgruppen fixing cars.

“Those cars took people to the pits so they could murder tens of thousands of Jews,” he said.

In a statement issued Thursday, the Wiesenthal Center called on the German judicial authorities to expedite the trials of Einsatzgruppen members.

“I would hate to see a situation where, because of some bureaucratic problem or lack of staff in Ludwigsburg, these people will be not brought to justice,” Zuroff told JTA.