With Racial Justice March set for Yom Kippur, these Jewish groups will participate in other ways 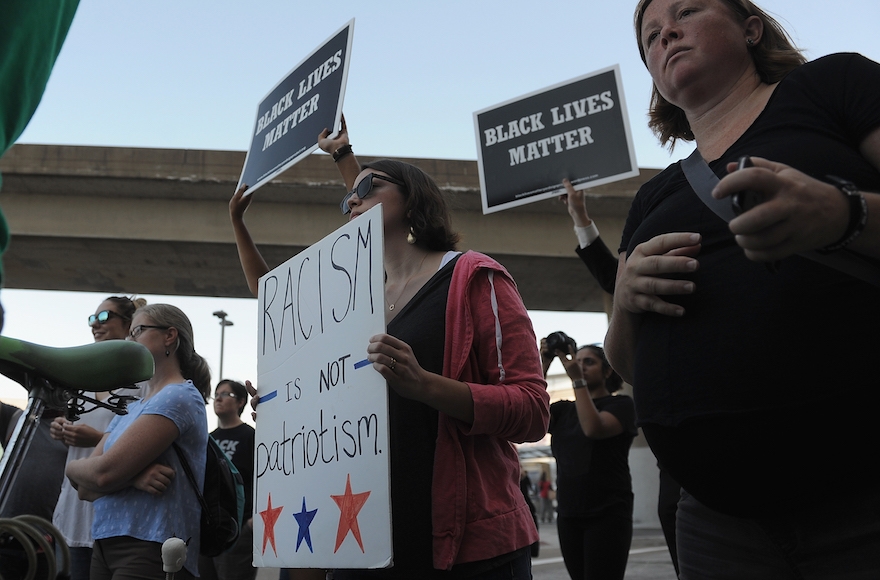 (JTA) — Despite a controversy over the scheduling of a Washington, D.C., anti-racism protest on Yom Kippur, Jewish groups are participating in sister marches the day after the holy day.

Jewish groups participating Sunday in a New York event for the March for Racial Justice include the American Union of Jewish Students, T’ruah: The Rabbinic Call for Human Rights, Jewish Voice for Peace and Torah Trumps Hate, a group for observant Jews opposing the Trump administration. The American Union of Jewish Students is also sending a delegation to a sister march in Providence, Rhode Island.

In an essay for The Times of Israel, WUJS’s director of communications, Hallel Abramowitz-Silverman, acknowledged her disappointment that the main march was scheduled for Yom Kippur and that some recent progressive demonstrations had shunned Zionist groups.

“Yes – it sucked that the main march is on Yom Kippur,” she wrote. “But we don’t get a pass on this issue because we’re hurt. The Jewish people have been on the correct side of the civil rights movement and it is still our responsibility to stand up for racial justice now, as generations of us have before.”

In August, march organizers apologized for scheduling the main event for Yom Kippur, the holiest day on the Jewish calendar, when Jews fast from sundown to sundown and attend lengthy synagogue services. They said the scheduling had been unintentional and that they would not change the date, but were “working on ways to include the Jewish community” in related events.

The march describes itself as “a multi-community movement led by a coalition united in our demands for racial equity and justice.”

Critics of the march’s scheduling included the actress Mayim Bialik, saying the date “automatically excludes a distinct portion of people who historically have stood up for racial equality in enormous ways.”

T’ruah is linking its participation in Sunday’s march with the themes of Yom Kippur.

“As we read in the Torah portion for Yom Kippur morning, Aaron the High Priest must go into the Holy of Holies, the innermost core, to achieve atonement. The same is true for racism,” Rabbi Jill Jacobs, its executive director, said in a statement. “If we want to root it out, we must seek it at the core, and acknowledge the ways in which it is built into the key institutions of this country. We must unite our resources, values and actions in fighting for racial justice.”