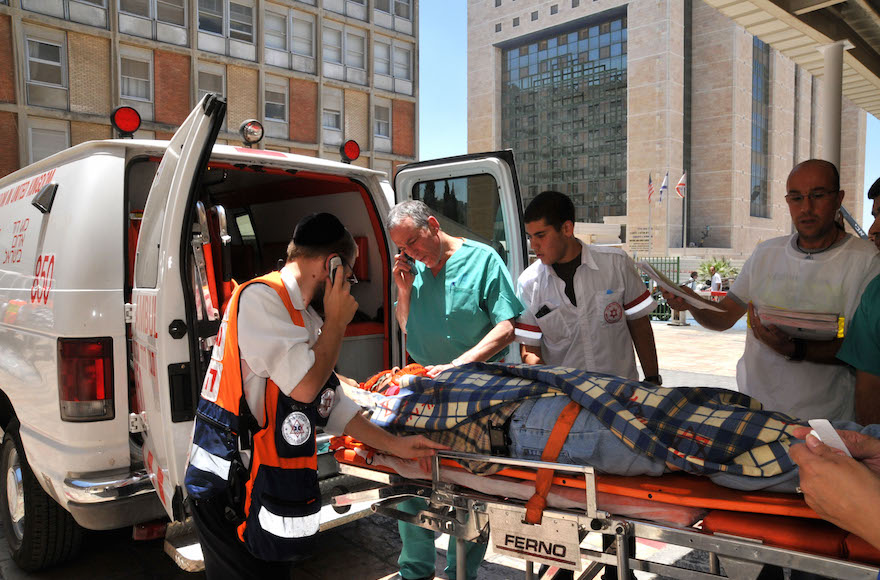 Dr. Avi Rivkind, in scrubs, cares for an injured person as they enter an ambulance. Rivkind has pioneered treatments for terror victims based on his experience in Israel. (Courtesy of Hadassah Medical Center)
Advertisement

(JTA) — When Dr. Avi Rivkind landed in Las Vegas three years ago to lecture as a trauma care expert, he saw something that troubled him.

He felt no more comfortable on the city’s Strip while watching crowds flow from hotels to casinos to shops to the street — with little security in sight.

“I felt there was a lack of presence, from the ease of getting around there, from the casinos, from how easy it is to enter all the malls,” he told JTA on Monday. “I felt very uncomfortable.”

Rivkind, who heads the Shock Trauma Unit at Hadassah Medical Center in Jerusalem, is a pioneer in treating victims of mass-casualty terror attacks. He gained his experience treating terror victims in Israel, and his techniques were used in 2013 to save the lives of some of the injured in the Boston Marathon bombing.

He came to Las Vegas in the summer of 2014 to speak at a Hadassah conference, but cut his trip short when Israel’s most recent war with Hamas broke out.

Before he left, however, Rivkind delivered a warning to a local TV channel: Get ready for a potential terror attack.

“With all the casinos and people are coming here from all over the world, I think you should take a huge situation,” Rivkind told Channel 8, the local CBS affiliate. “I don’t want to give anybody any ideas. However, you should be well prepared. In my mind, it’s a question of time.”

Rivkind’s words feel ominous today after a gunman rained bullets from a Las Vegas hotel room window, killing at least 58 people and injuring more than 500 at a concert Sunday in the worst mass shooting in American history. Police said the gunman, Stephen Paddock, 64, of Mesquite, Nevada — killed himself and appears to have acted alone.

Rivkind had spent stints living in Los Angeles and Baltimore, so he was familiar with the scale of an American metropolis. But he hadn’t felt scared in those cities.

Although he can’t remember details now, Rivkind said something felt more dangerous about the public spaces in Las Vegas. He noted that some of the 9/11 hijackers met in the city before carrying out their 2001 attack.

The doctor said he offered to advise local government officials on emergency preparedness but never heard back.

“It was clear, I don’t know why, that it was destined for calamity,” he told JTA.

His specialty is blast trauma, or how to care for victims of a bombing attack, honed during the bloody years of the second intifada at the beginning of the century. Rivkind has taught at hospitals around the world how to save victims from massive blood loss and injuries to vital organs. In one instance he revived a soldier who had been shot in the heart and was pronounced dead in the field.

Rivkind also invented the “accordion method” of efficiently moving patients through stages of assessment in a crowded emergency room. He was the personal physician for the late Israeli President Ezer Weizman, and helped care for Ariel Sharon when the former prime minister fell into a coma in 2006 following a stroke.

But Rivkind cautioned that medical care after a mass shooting like Sunday’s is different from treatment following a bombing. Besides, he said, “this is a time to turn inside yourself and feel the pain. This is not a time to give suggestions.”

But after a career saving the lives of terror victims, Rivkind said the news of the Las Vegas attack hit especially hard.

“On one hand, you do exceptional things to save a human life,” he said. “Then one crazy piece of shit comes to kill without blinking an eye.”