At least 58 dead, over 500 wounded in shooting attack in Las Vegas 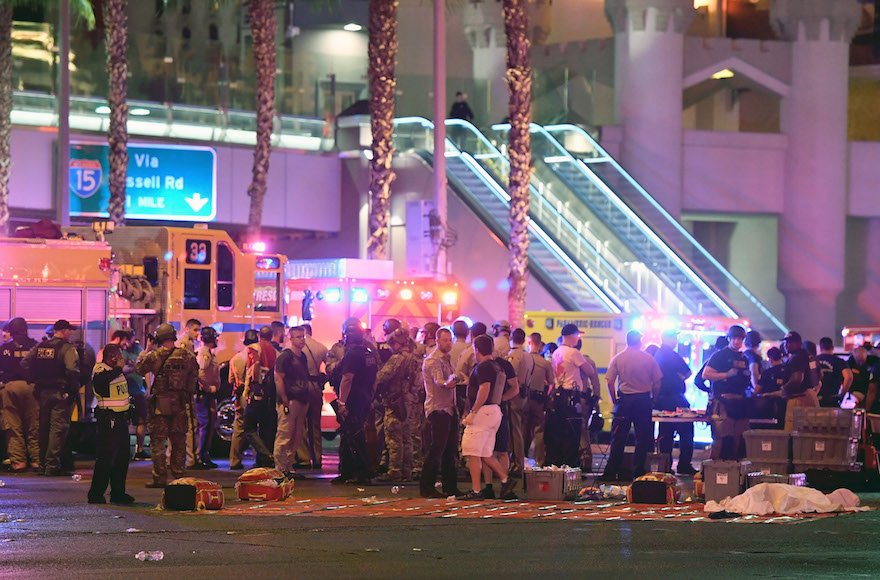 Police and rescue personnel at the intersection of Las Vegas Boulevard and Tropicana Ave after a shooting at a country music festival in Las Vegas, Oct. 2, 2017. (Ethan Miller/Getty Images)
Advertisement

(JTA) — At least 58 people are dead and more than 500 wounded in Las Vegas in the deadliest mass shooting in U.S. history.

The attack took place at a country music festival outside the Mandalay Bay Resort and Casino on the Strip late Sunday night.

The gunman has been identified as Stephen Paddock, 64, who apparently killed himself in a standoff with police. Paddock reportedly shot at the crowd with automatic weapons from a room on the 32nd floor of the Mandalay at around 10 p.m. while singer Jason Aldean was performing. Police said at least 10 firearms were found in the hotel room. Aldean was the final performer of the night and of the festival.

Some 22,000 people were at the venue at the time of the shooting, though not all were at the concert. Among the dead and injured are police officers.

President Donald Trump in a nationally televised news conference called the attack “an act of pure evil.” He offered his and wife Melania’s condolences to the families of the victims of the attack and prayers for the recovery of the injured.

Trump said the FBI and the Department of Homeland Security are working with local officials to investigate the attack. The president said he would visit Las Vegas on Wednesday to meet with investigators, first responders and families of the victims.

Eight Israelis are unaccounted for and considered missing in the wake of the attack, Israel’s Foreign Ministry told the nation’s Channel 2.

Emmanuel Nachshon, a Foreign Ministry spokesman, in a tweet sent “love and solidarity from Jerusalem.”

“On this terrible day, the people of Israel stand shoulder to shoulder with the American people in mourning and sorrow. Our hearts go out to the victims’ families and we wish a speedy recovery to the wounded. We grieve with you.”

The Islamic State claimed responsibility for the attack, saying that Paddock converted to Islam several months ago, but did not offer any proof, The Associated Press reported. Senior U.S. officials have dismissed the claim. An FBI official at a media briefing in Las Vegas also also said the investigation has determined there was no connection to any international terrorist group but the probe would continue.

The Jewish mayor of Las Vegas, Carolyn Goodman, in a tweet asked her followers to “Pray for Las Vegas.” She also thanked the first responders.

Terrible massacre in #LasVegas . My heart goes to the victims and their families. Love and solidarity from #Jerusalem 🇺🇸🇮🇱

Pray for Las Vegas. Thank you to all our first responders out there now.

Sheriff Joe Lombardo in a news conference said that Paddock was a “local individual” and police were assessing whether the shooting was an act of terrorism. Several news outlets later identified Paddock as being from Mesquite, Nevada, about 80 miles from Las Vegas, along Nevada’s border with Arizona.

Paddock reportedly was not known to police, was not a veteran of the military and lived in a retirement community.

Rabbi Rick Jacobs, president of the Union for Reform Judaism, in the wake of the attack called for gun control legislation.

“This latest mass shooting cannot be termed a random act of violence,” he said in a statement. “Even before all the facts are known we know this: rather than revere gun rights our country must finally revere human life.”

“We mourn those callously slaughtered in Las Vegas and pray for the wounded. But our prayers must be followed by action, long overdue limits to the easy access to fire arms.”

There are over 70,000 Jews and at least 19 synagogues located in Las Vegas, according to the JewishVegas.com website.

Images from the active shooter scene so far around Tropicana and Las Vegas Boulevard #RJnow pic.twitter.com/5QWavyO3lF