Why one NBA team’s president is its MVP 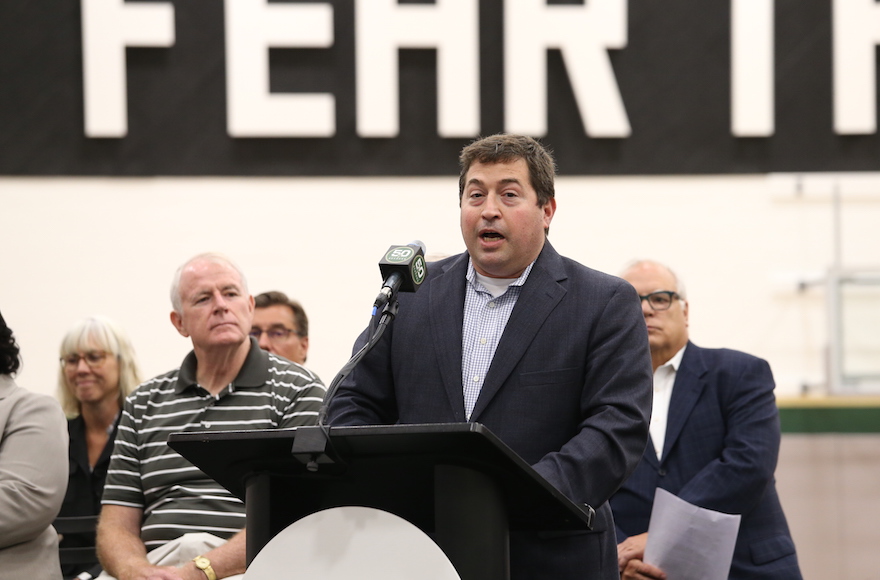 (JTA) — When Peter Feigin took over as president of the Milwaukee Bucks in 2014, he pledged that the long-beleaguered NBA team would become one of the most exciting sports franchises in the world.

By doing that, he added, the Bucks would improve the lagging economy of the city and raise the residents’ spirits.

To spread his message Feigin, 47, promised to go “anywhere and everywhere,” from rotary clubs to schools to poverty-stricken areas of the city. He estimates that he spoke about the basketball team he runs at some 140 public events in his first year on the job.

Feigin explained his strategy to JTA.

“We’re going to market the city not as a Chicago afterthought, not as a low self-esteem [place], but aggressively as … a magnet for people from all over the country,” he said. “The goal is to be the best sports entertainment company in the world.”

In his three years at the helm, the brash New Yorker seems to be delivering on his ambitious promise.

During the 2013-14 season, prior to the hiring of Feigin, the Bucks had the worst record in the National Basketball Association, 15 wins and 67 losses — the worst in the club’s nearly 50-year history. Last season, the team won 42 games and made the playoffs. While the Bucks lost in the first round of the playoffs to the Toronto Raptors, the young squad is seen as among the most promising in the league with players such as Giannis Antetokounmpo  (“The Greek Freak”) and Jabari Parker.

As the Bucks ready for the beginning of the NBA season later this month, Feigin has emerged as one of the public faces of the team, at least in Milwaukee. With the exception of George Steinbrenner, the late owner of the New York Yankees, or Mark Cuban, who owns the NBA’s Dallas Mavericks, that’s unusual for a team executive in any sport.

It’s even rarer for a president, who usually has a behind-the-scenes role overseeing the general manager and the inner workings of the organization. 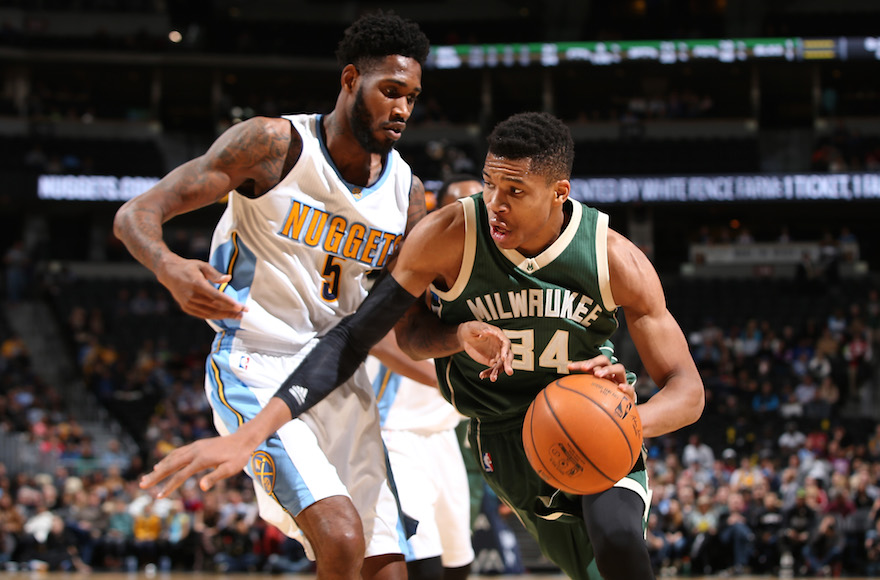 Giannis Antetokounmpo, seen here driving to the basket in a game against the Denver Nuggets in 2015, is an All-Star on a rising Bucks squad. (Doug Pensinger/Getty Images)

Under Feigin’s leadership, the Bucks started construction on a $524 million arena in downtown Milwaukee, a linchpin in the some $1.4 billion worth of developments underway there — the city’s biggest development surge since the 1960s. By the time it’s completed, the arena project will have created around 10,000 construction and service jobs. The franchise has committed to paying its workers at least $15 an hour by 2023, and Feigin says it will focus on hiring people from Milwaukee’s poorest neighborhoods.

The arena plan — Feigin fought for it tooth and nail, eventually bringing Bucks coach Jason Kidd onto the floor of the State Capitol in Madison to help coax votes from both sides of the aisle — followed a highly praised redesign of the team’s uniforms in 2015, as well as the launch of the slogan (just before Feigin arrived) now pushed constantly in marketing campaigns: “Fear the Deer.”

“We thought [the phrase] worked with our vision of this young Buck team,” Feigin said. “Nobody is really looking forward to playing us. We’re a little inconsistent, but on any given night we could be fantastic.”

Feigin isn’t all talk. He frequents local businesses and has become friends with well-known Milwaukee characters like Gaulien Smith, owner of the Gee’s Clippers barber shop chain — Feigin describes Smith as “one of the most influential African-Americans in the city” — and Gino Fazzari, owner of the popular Italian restaurant the Calderone Club. He prefers wearing Bucks sweatshirts around town and at work rather than suits.

“He’s the life of the barbershop when he comes in,” Smith told the Milwaukee Journal Sentinel in July. “All the clients know him. All the barbers know him. He’s just a great guy.”

Feigin’s rise to local fame is also notable given he’s an outsider in the low-key Midwestern city.

“Of all the transformative moves made by Bucks owners Wes Edens and Marc Lasry since they bought the franchise from Herb Kohl in 2014, the smartest thing they did was hire Feigin, a high-energy, low-maintenance executive who arrived three years ago as an outsider but already is so ingrained in the culture of Milwaukee that he might as well be the Fonz,” the Journal Sentinel wrote.

Despite his popularity, however, Feigin remains an outspoken Jewish New Yorker who hasn’t been afraid to speak his mind. Last fall, in one of his speeches to a local rotary club, he called Milwaukee “the most segregated, racist place I’ve ever experienced in my life.” Since then, he has said that his comments, which made headlines at the time, started a positive dialogue about the city’s communities.

Feigin was not brought up in a very religious household on Manhattan’s Upper East Side, and doesn’t belong to a synagogue in Milwaukee. But the married father of two teenagers — a daughter and a son — said he is proud of his father’s Jewish Brooklyn roots.

“That’s [part] of [being] from New York, pride of heritage,” he said. “Even though I’ve integrated into Milwaukee, everybody in Milwaukee will always consider me a New Yorker.”