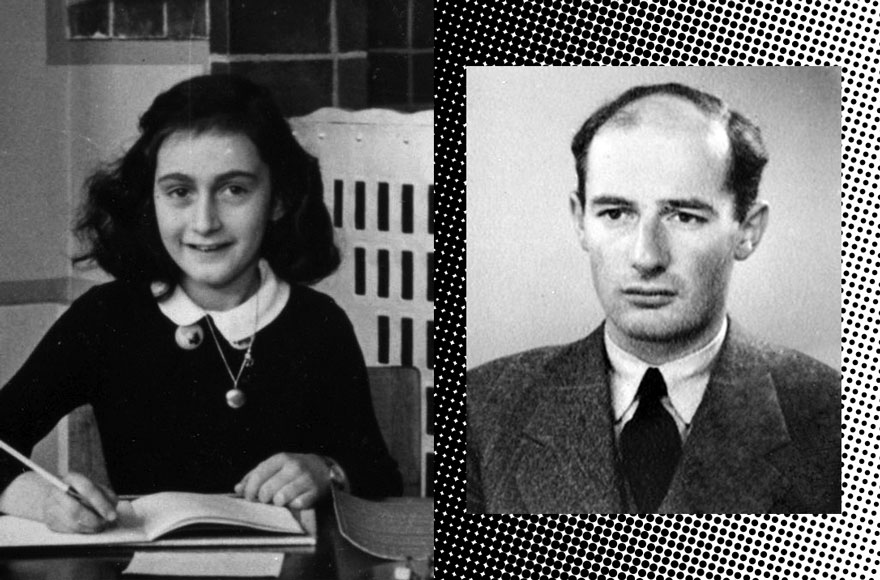 (JTA) — After 70 years of studying the Holocaust, historians still don’t know the exact circumstances of the tragic fate that befell two of the best-known victims of the Holocaust era: Anne Frank and Raoul Wallenberg.

Frank, the teenager whose journal of her days in hiding from the Nazis in Amsterdam has sensitized millions to the suffering of 6 million victims, died in 1945 in Bergen-Belsen after the Nazis caught her. But nobody knows who, if anyone, betrayed her and her family to the Nazis.

Meanwhile, Wallenberg, the Swedish diplomat who saved countless Hungarian Jews by issuing them visas to Sweden, disappeared without a trace in the 1940s. Subsequent evidence emerged proving that the Soviet Union lied when it said he had died in 1947 in one of its prisons.

These mysteries separately have caught the eye of two American experts who both believe they can use the power of computation to make progress in the cold cases.

On the Frank case is a retired FBI agent, Vince Pankoke, who last week told the Volkskrant daily in the Netherlands that he has assembled a team of more than a dozen forensics and computer experts. They will use their expertise to scan archives with greater efficiency and speed than ever possible using orthodox methods of historical research.

And on Wallenberg’s trail is a mathematician from Baltimore, Ari Kaplan, whose specialty is to quantify baseball players’ performances to identify patterns over time, which can then be translated into effective strategies.

In both cases, any success will beat the odds.

Dutch police have launched two rather thorough investigations to discover whether Frank was betrayed and if so by whom. The first probe in 1948 was unsuccessful; one mounted in 1963 was to no avail.

Since then, writers and historians have offered various theories, none of which were proven, including one centered on the sister of a typist working for Otto Frank, Anne’s father.

But Pankoke, 59, says that’s not where the case needs to end.

“There is so much information available these days, from archives, old studies,” he told the Volkskrant. “For individual people it is impossible to overview in its entirety, but with the right software it’s achievable. That way you can connect the dots through analysis.”

Analysis is also the name of the game for Kaplan, the baseball fan and math whiz looking into the Wallenberg case.

His algorithms helped pinpoint Wallenberg’s exact cell in Lubyanka prison, according to Marvin Makinen, a professor of biochemistry at the University of Chicago who says he heard from inmates who saw Wallenberg alive long after the bogus death announcement. Makinen, Kaplan and several others are part of an unofficial task force to find out what really happened to Wallenberg.

The algorithm helped Kaplan and Makinen put together a complex database analysis of the cell occupancy at the prison from 1947 to 1972 based on partial Russian prison records.

In the analysis, Kaplan and Makinen show that some rooms in the overpopulated prison had remained empty — on paper, at least — for more than nine consecutive months at a time. To Makinen, this suggested a prisoner or prisoners had been kept there but were not listed on the registry. He and Kaplan believe Wallenberg was kept in the cell listed as empty.

Last year, Makinen and Kaplan visited Moscow to present officials with a 57-page report requesting specific documents, ranging from the Soviets’ wartime intelligence files on Wallenberg to papers dealing with the return in 1999 of Wallenberg’s personal items, Tablet reported this week in an interview with Kaplan.

The research suggests that receiving “just a handful” of the documents from the Russian state archives “would have solved the case or at least shed light,” Kaplan told Tablet.

He insists that Wallenberg’s fate eventually “will be revealed.”

“It is just a matter of when, and I want it to happen soon — for the closure of his family and those he rescued,” Kaplan said. “That is what keeps me upbeat.”

Despite the impasse they have reached, Kaplan and Makinen may be on firmer ground than Pankoke. After all, they know the Russians took Wallenberg, whereas Pankoke may be barking up the wrong tree altogether, according to the Anne Frank House in Amsterdam.

Last year that institution, which runs the Anne Frank museum at the Amsterdam address where she hid before her capture and murder, published a report suggesting that Anne Frank and her family were never betrayed, but were caught by chance in a German raid aimed at suspected counterfeiters of food stamps.

The issue is controversial in the Netherlands. For decades, the absence of a traitor in Anne Frank’s story has helped it become a tale celebrating the heroism of resistance activists who helped the family hide from the Nazis. But the discovery of a traitor could change the story dramatically, giving a face and a name to the massive collaboration that went on in the Netherlands during the Nazi occupation – a key reason for the murder of 75 percent of Dutch Jewry, which is the highest per capita death rate in occupied Western Europe.

Thijs Bayens and Pieter Van Twisk, respectively a filmmaker and journalist from the Netherlands, recruited Pankoke and initiated his investigation. (Last month they published in the media and online an appeal for information from anyone with knowledge of Anne Frank’s arrest).

They are working with Xomnia, an Amsterdam-based company specializing in processing and analyzing large amounts of information, to bring closure to her story, they said. The group, which has more than a dozen investigators, is documenting its efforts on a website called coldcasediary.com.

“The amount of data is overwhelming,” Bayens told The Guardian. “It is at least 20 to 25 kilometers of files at this moment and we have just started. To try and make all this data relevant is quite complex, so we started to work on artificial intelligence algorithms to rule the data, as they say.”

Bayens said that most of the people who were around the Frank family and were still alive after the war “are in the police files of the previous investigations.”

“They were brought in for questioning,” he said, “so we have detailed reports on that.”