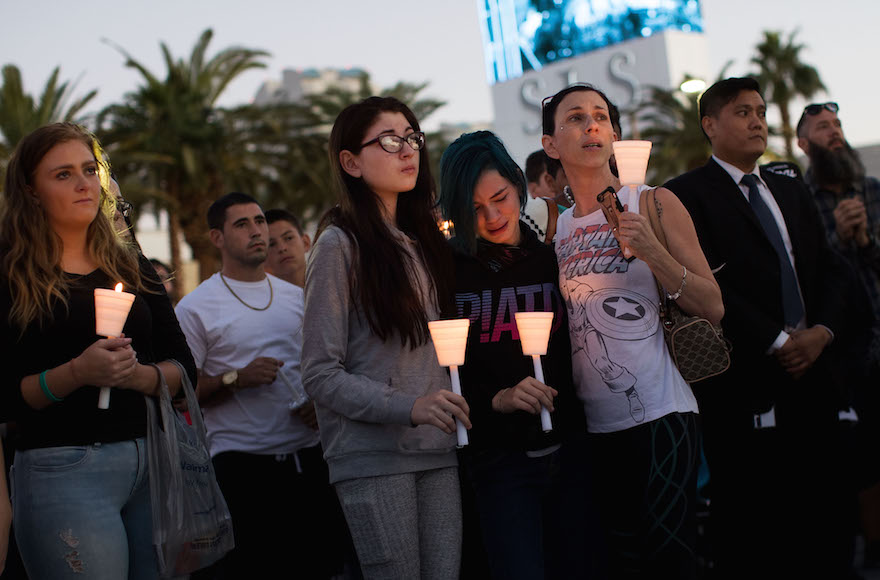 LAS VEGAS (JTA) — We just got into our car and drove. Going to Las Vegas after the deadliest mass shooting in modern American history felt like the right thing to do. As Americans and as Jews, we wanted to be a source of support and love in the face of terror. We wanted to stand with the victims and their families. With Yom Kippur only two days behind us and Sukkot on its way, we saw a window to show up — and so we started to drive from L.A.

Rabba Ramie Smith and I are graduates of Yeshivat Maharat, the first school to ordain Jewish Orthodox female spiritual leaders. Our rabbi and teacher, Rav Avi Weiss, taught us to show up. As Jews, we are called to walk in God’s ways, which means being with the brokenhearted and the vulnerable — to be present with an open heart and open arms — even when we are not sure what lies ahead. And so, when our fellow Americans, of all faiths and backgrounds, are in need, it is our duty as Jews to be by their sides.

So what happened when we got there?

We delivered food and water (donated by Yeshivat Maharat) to a local church, whose representatives told us over the phone, “We will be open for whoever needs us for as long as is needed.” That church took a truckload of food to victims and their families, as well as to volunteers around the city. We spoke with local hospitals and synagogues of different denominations and learned that every house of worship in the city would be offering a prayer vigil.

Everywhere we looked, the billboards flashed not with advertisements, but with thanks to the first responders with the words “Pray for Las Vegas.” Hotels provided complimentary housing for victims and their families from around the country, and people in the street stopped to check in with each other.

We participated in a city candlelight prayer vigil for all faiths and provided one-on-one spiritual counseling for those present. We prayed from our Jewish texts, and we heard the prayers of others and their stories.

One woman who managed a local restaurant opened her doors to the victims until 4 a.m. on the Monday after the shooting. She had been supporting and welcoming the victims into her restaurant when they could not get into their hotels — when they had nowhere else to go. She came to the vigil to get support for herself and to process all she had seen and heard.

One local young man shared frustration at how helpless it felt to want to do something for the victims and families but not knowing what to do. He said just bringing positive energy and presence to the vigil was his way of praying. Tourists from all over the world signed posters and lit candles. And locals spoke about how proud they were of this Vegas, this America, that was united and, though hurt, would never be broken.

And perhaps the most heartwrenching experience was providing spiritual care and counseling at the family crisis center, where families of those who had not yet been found were waiting for news — waiting for 15 hours in limbo, in the greatest nightmare, not knowing if their child was alive or dead, or if their loved one was in a hospital or in a morgue. One high school girl who was waiting to hear about her sister said, “Where is she? My sister is supposed to go to my graduation. I didn’t tell her I loved her enough.” I held her as she sobbed. 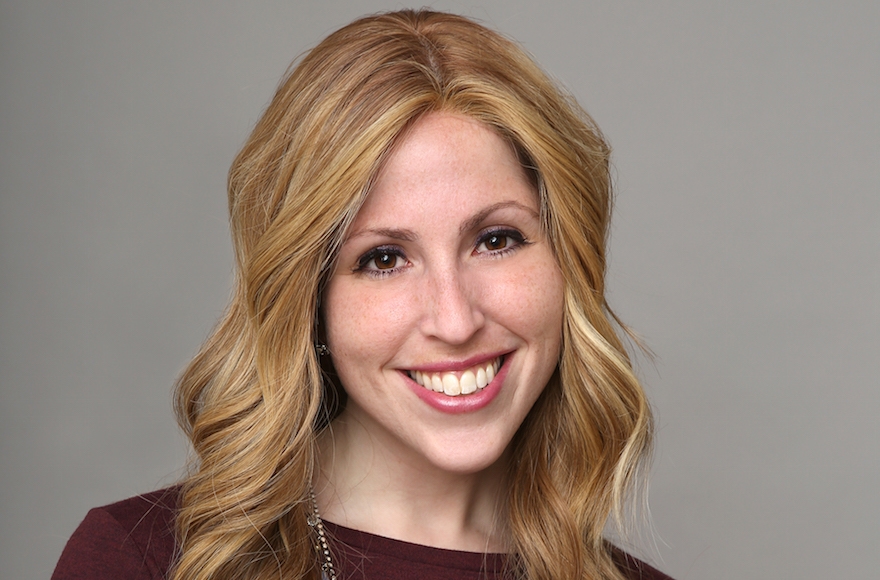 So what can we do as a larger Jewish community?

It is clear that Las Vegas will continue to need our support in the days and weeks to come. The victims and their families, as well as the local volunteers and laypeople, will need ongoing support in a variety of forms as the city mourns and heals. As Jews and as Americans, we can each walk in God’s ways by showing up in whatever way we can.

We are about to enter into Sukkot, a time of year when we are acutely aware of our vulnerabilities and fragility, so much so that we dwell in fragile booths. And at the same time, the sukkah itself is a symbol of comfort and guidance, a commemoration of the clouds of glory that God sent to lead and support us in the desert.

The sukkah embodies our connection with God in the face of fragility, and as we sit in it with friends and family, it informs our relationship to each other. This Sukkot, let’s bring the mitzvah of the sukkah to life — let’s extend the idea of the sukkah beyond the usual, going outside of our regular dwelling places. Let’s walk in God’s ways and be a source of comfort, guidance and support to our fellow Americans. Let’s show up.

Here are some ideas for how to help out:

* If you are able to volunteer in person, presence is incredibly powerful. The Convention Center, where the support and relief efforts are being run, is organizing volunteer needs (i.e. professional chaplains, lay volunteers, clergy, etc) and should have a clearer idea in the next day or so. Rabba Ramie and I will continue to work on this together with Chaplain Rocky Dickerson, our contact in Las Vegas.

* Donate food, water, blood and money. From last we heard, thank God, the blood banks and food donations were sufficient. But the need for support will certainly be ongoing. In the meantime, the Clark County Commission Chair from Las Vegas has set up a fundraising campaign for relief and financial support for the victims and their families.

* Host a prayer vigil in your community. There can be words of Torah shared, Psalms recited and, depending on your community, interdenominational and even interfaith involvement. This is the time when we must unite.

(Rabbanit Alissa Thomas-Newborn is a member of the spiritual leadership at B’nai David-Judea Congregation in Los Angeles.)