In Japan, observing Sukkot requires creativity — and sometimes a bit of smuggling 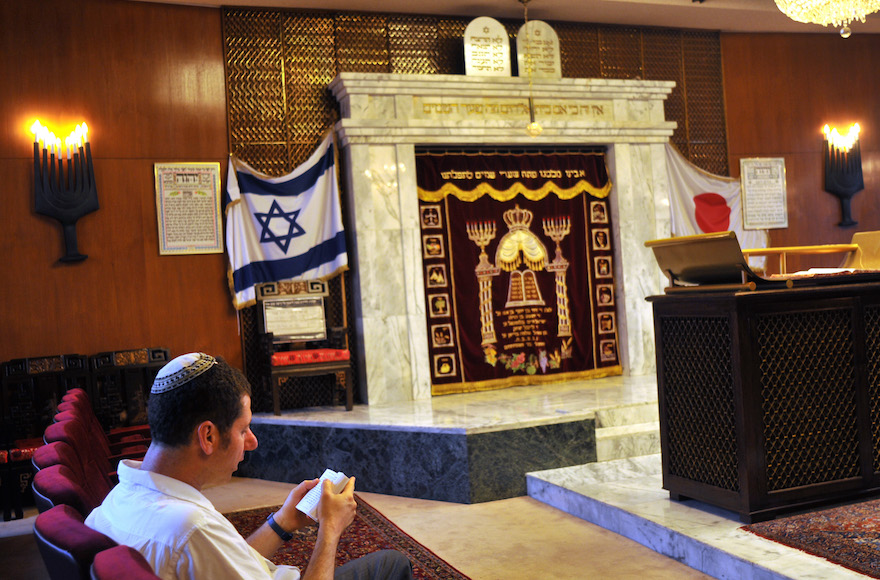 A man praying at the Kobe synagogue in Japan, June 26, 2009. (Serge Attal/Flash90)
Advertisement

KOBE, Japan (JTA) — Like many international smugglers, the one servicing the Jewish community of this port city 300 miles east of Tokyo has perfected his poker face to avoid customs inspections.

But unlike other smugglers, the one from Kobe, who spoke to JTA last month on condition of anonymity, carries no cash, drugs or any of the contraband favored by his counterparts.

Instead, he brings in kosher meat and, ahead of the Jewish holiday of Sukkot, three of the four species — the plants that Jews use for ritual purposes during the weeklong festival culminating the High Holidays period.

“I don’t want to do it, but it’s the only way to make sure we have these items,” said the smuggler, a tall man in his 50s.

Like most Jews who pray at the century-old Ohel Shelomoh Synagogue here — the oldest Jewish house of worship in Japan — he arrived from Israel more than 20 years ago after his army service and ended up staying and having children with his local wife.

He sources three of the four species that are carried during Sukkot services: the etrog, a lemon-like fruit; the lulav, a frond from a date palm tree; and leaves from the myrtle tree.

The fourth, willow, grows in Japan naturally, including in a plot just outside Ohel Shelomoh. The synagogue was renovated and rebuilt in 1970 atop the storage basement where the first Jewish settlers from Eastern Europe used to pray when they arrived in Kobe in the early 1900s. It has local and Jewish decorations, including a wall-to-wall gray carpet for walking shoeless, wood lattice in Japan’s signature shoji style, and the flags of Japan and Israel on either side of the Torah ark.

Japan’s Jewish community of 1,000 people is a diverse group of expats – Israelis, Americans and French make up a sizable portion — with active congregations in Tokyo, Kyoto and Kobe.

They all have trouble obtaining permits to bring kosher food and organic material to the island nation because of its strict limits on importing plants and animals, as well as quarantine requirements that are designed to limit the spread of invasive species and diseases.

But in addition to encouraging some Jews to smuggle in literally forbidden fruit and forcing some observant Jews into a vegetarian lifestyle, the obstacles are also creating interdenominational cooperation between Conservative and Orthodox communities that rarely occurs elsewhere.

Shortages in the four species mean that in Japan, the Conservative Jewish community in Tokyo – an affluent group of 110 families that includes many executives from English-speaking countries — get their Sukkot kit from Tokyo’s Rabbi Binyomin Edery, a follower of the late Chabad-Lubavitch rebbe. And they buy kosher meat in consortium together with the Hasidic movement’s chief emissary to Japan, Rabbi Mendi Sudakevich.

“The Jewish population here is so small that we have to put aside our divisions,” said Kobe’s rabbi, Shmuel Vishedsky, another Chabad emissary and father of four whose congregation comprises 100 members, including non-Jewish spouses.

Vishedsky welcomes the non-Jews in a manner that is rare in Chabad communities and more customary in Reform ones. In another Liberal-like departure, he also allows women, Jewish or otherwise, to sit in the men’s section – all for the sake of adapting to his congregants.

“What matters here in Japan and in life generally is to treat everyone with respect,” Vishedsky said. “So that’s what we do.”

Moshe Gino, a member of the Kobe Jewish community who grew up in Israel, attends Vishedsky’s synagogue with his Japanese-born wife, Hanna, and their twin 8-year-old daughters.

“It was important to me she convert, and then it became important to her,” Gino said. The girls were born after she became a Jew by choice.

Others, including Lior Pasternak, 36, who also has two children with his Japanese wife, come alone to shul. He arrived in Japan in the 2000s, during his post-Israeli army travels.

“This is the profile of most of the members of this community,” Vishedsky said about the Kobe congregation. “By contrast, in Tokyo you will see more American expats with high-power jobs.”

On Simchat Torah, a celebration of the Jewish holy book that comes immediately after Sukkot, Vishedsky throws open the doors of his synagogue, sets up a wet bar inside and hosts an alcohol-soaked feast that lasts well into the morning.

“You’ll find people sleeping it off as late as 10 a.m. either in synagogue” or on the building’s large terrace, where Vishedsky and his wife, Batya, each year erect a large sukkah, or temporary hut, that is open to all.

This welcoming attitude is helping to draw in locals interested in converting, including Igor Iha, a neuroscience student at Kobe University who was born in Brazil to a family of Japanese descent and came to Japan four years ago.

“I looked into Christianity and Islam; it didn’t make sense,” he said. “But everything about Judaism felt right.”

Near the end of Yom Kippur, a visibly tired and thirsty Vishedsky welcomed into the synagogue a group of 30 university students who came on a tour as part of their intercultural studies. Slightly afraid to offend, they asked about the religious objects around them and wanted to see a copy of the Talmud, a central Jewish text that commands great respect in the Far East.

After they left, Vishedsky watched with an amused expression as the smuggler boasted to a journalist and other congregants about his exploits.

“The trick is to mix the forbidden materials with innocuous stuff,” the smuggler explained. “I like to stuff the four species into a bag full of packaged snacks that I bring from Israel — Bamba and Bisli. If I get searched, they see it’s food but they don’t see the plants.”

As he spoke on the fast day, the synagogue was filled occasionally with the smell of roasting meat from a nearby restaurant serving the high-quality beef for which Kobe is known internationally.

The smuggler recalled being busted with a pack of kosher steaks, but was allowed to pass through anyway when he explained it was kosher food.

“There’s some leniency,” he said, “so even if I’m caught, hopefully they’ll just take my stuff away at worst instead of putting me in prison.”

Even so, “It’s not easy to get permits to bring stuff in,” confirmed David Kunin, the Conservative rabbi from Tokyo whose congregation, known as the Jewish Community of Japan, sometimes gets the four species via the Israeli Consulate. “There’s a ton of paperwork about it, especially with food.” 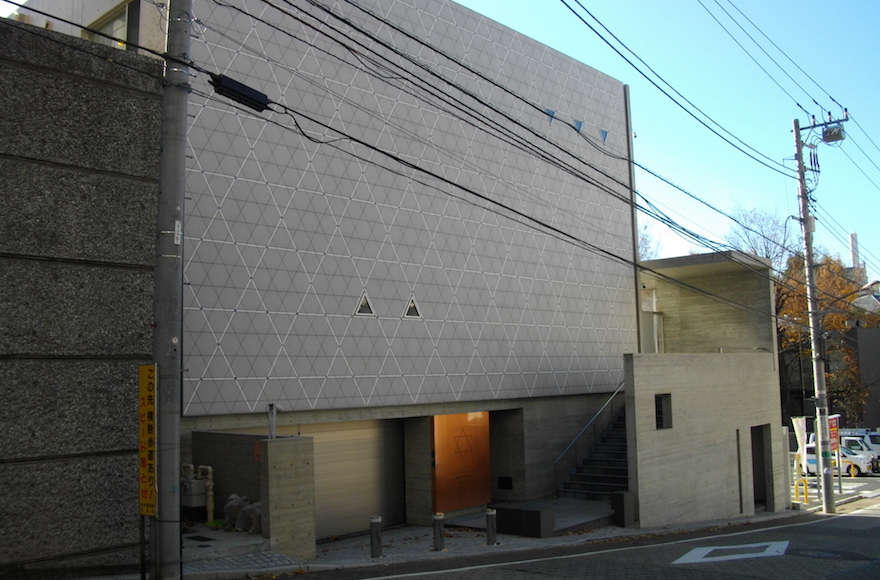 The Jewish Community of Japan, a Conservative congregation of 110 families, meets in modern building in Tokyo built in 2009.(Abasaa/Wikimedia Commons)

But the consulate sometimes does not deliver enough of the four species to his congregation. This year, Kunin’s community received the plants from Edery, the Chabad rabbi. The plants, which Edery brings in using a rare permit, arrived in the nick of time for the holiday, which this year starts on Wednesday evening, Oct. 4.

Kosher beef is a rare treat here, but chicken is in steady supply for observant Jews thanks to Edery, who brings in shochtim, or ritual slaughterers. He shares the meat with the Conservative congregation.

Despite the challenges, belonging to a small but affluent Jewish community has its perks, said Kunin, a Canada-born father of one who four years ago came with his wife to take up the rabbinical position in Tokyo.

He misses being part of “a larger and more vibrant community,” he confessed, but finds “immense satisfaction” in guiding his own far-flung parish.

Plus, he gets to do it style.

Kunin’s congregation is based in a sparkling and tastefully decorated synagogue and community center – a multimillion-dollar structure with large windows and light colors situated in the heart of Tokyo, near the Shibuya station. Donated by a philanthropist who wished to remain anonymous, the building was completed in 2009 and features classrooms where the community’s elementary school-age children are taught Hebrew and Jewish subjects twice a week.

The community also has televisions with 60-inch screens and a kitchen with the amenities one usually sees at prestigious restaurants.

“A congregation of 110 families, having a building like this, employing a full-time rabbi and having a Jewish school — in most places this would be unheard of,” Kunin said.